Tupelo Press and Kundiman are delighted to make the joint announcement that Tupelo Press Editor-in-Chief Jeffrey Levine and Poetry Editor Cassandra Cleghorn have selected Sharon Wang of Ridgewood, New York as winner of the 2016 Kundiman Poetry Prize for her manuscript, The Republic of Mercy. 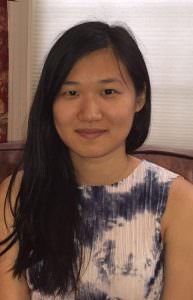 Sharon Wang’s poems have appeared in journals including Blackbird, Omniverse, The Volta, and Tupelo Quarterly. She is a poet and software engineer living in New York City.

Cassandra Cleghorn and Jeffrey Levine on The Republic of Mercy:
This is a startling, ambitious debut. In Sharon Wang’s thrilling and corporeal geometry, touch dominates, if often in its “aftermarks”: singes, whiffs, folds of fabric, echoing gestures between bodies. A sureness of craft and extraordinary control of tone enable Wang to move through a range of lyric personae, always believable, never reducible, by turns modest (“here move slowly we are not practiced”), speculative, heart-broken, ecstatic, even giddy with vaulting dreams (“But who wouldn’t want to be the sun”). With generous language and quicksilver intelligence, Wang expresses “a hunger so large it stops the mouth.” In Wang’s hands abstractions beget the world; the poems describe what is “hard and brilliant,” the spaces between objects, and what’s left in the wake of losses. But despite its attunement both to elegy and to witness, the mode is praise: “He loved the world. He loved it suddenly/ and without reason.” Like the book’s favorite flower, the aster, Wang’s poems contain something that threads inside them, “asking them to open, shut, live.” And live they do. As the poet works to understand, “If in fact it wasn’t possible to build/ the world anew,” she does build – extravagantly, judiciously, lovingly. The result is a book of radiant integrity.

This marks the second year of the new partnership between Tupelo Press, a nonprofit, independent literary press, and Kundiman, a nonprofit organization dedicated to the creation and cultivation of Asian American writing. Tupelo Press selects the winner of the annual Kundiman Poetry Prize from among a group of finalists chosen by Kundiman. Now in its 7th year, the Kundiman Poetry Prize ensures the annual publication of a book by an Asian American poet. The award is open to self-identified Asian American poets at any stage in their careers. Tupelo Press could not be prouder of this continuing association.