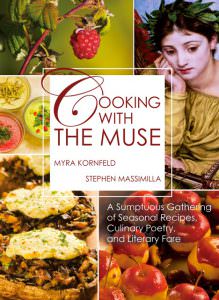 *
Hominy, Tomatillo, and Pepper Stew Baked in a Pumpkin
* 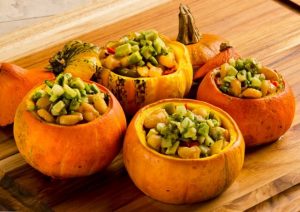 A bewitching stew of hominy, tomatillos, red peppers, and spices bakes luxuriously in a cheese-laced pumpkin, whose flesh becomes part of the dish. Like a colorful smoke-stained cauldron, the whole pumpkin makes an exciting centerpiece, and it is designed to be topped and eaten with a luminescent green Poblano-Avocado-Cucumber Salsa (page 100).

You can use 1-pound pumpkins, which are individual sized, or bake larger sizes and portion out the dish after it’s baked. The recommended squashes are those from the buttercup family, such as the kabocha, and others that have dense buttery flesh, such as the conical flame-orange Hokkaido and red kuri squashes; you can even eat the skins. Individual servings can also be baked in sweet dumpling or carnival squashes. Let the farmers’ market be your guide to the pumpkin of the hour.

For a shortcut, you can use one 15-ounce can of hominy (drained). If you want, leave out the cheese for a vegan version. No matter how you make it, this dish will cast a spell on all your guests.

1. Preheat the oven to 350ºF. Cover a baking sheet with parchment paper.
2. Place the pumpkins, whole, on the baking sheet and place in the oven for 10 minutes to make them easy to cut. Remove from the oven and let cool until you can handle them. Leave the oven on.
3. Warm 1 tablespoon of the oil in a medium pot over medium heat. Add the onions, garlic, and bell pepper; sauté for 7 minutes or until softened. Add the chile powder, cumin, and oregano; stir to combine and cook for 3 minutes more, until fragrant.
4. Stir in the tomatillos, hominy, 1/2 cup water, and 3/4 teaspoon salt. Cover and bring to boil. Lower the heat and simmer, partially covered, for 10 to 12 minutes, until the tomatillos are softened. Uncover and cook 5 minutes more if necessary to thicken the stew. Taste, and add more salt if desired.
5. Meanwhile, cut off the tops of the pumpkins, cutting around the stems to make lids. (If need be, shave a thin strip off the bottom of each so that the pumpkins stand upright.) Scoop out and discard the entangling cobwebs of seeds and strings. Rub the insides of the pumpkins with the remaining 1 tablespoon oil and sprinkle generously with salt. Divide and sprinkle the cheese on the bottom of each pumpkin.
6. Fill the pumpkins with stew, then top with the lids. Return to the baking sheet and bake until fork tender, 1 1/2 to 2 hours.
7. Remove the pumpkins from the oven and let sit for 5 minutes. Scoop out the stew, including the pumpkin flesh, into bowls (or eat it right from the pumpkins) and serve hot, topped with the salsa.

Cook’s Note
Hominy is dried corn that has been treated with an alkali, such as calcium hydroxide (lime), which creates a distinctive flavor (think corn tortillas), makes the niacin and protein in the corn more bioavailable to the body, and keeps the grain from sprouting while in storage. This whole traditional Amerindian process of treating the corn is called “nixtamalization.” You can nixtamalize corn yourself by boiling 1 pound (2 cups) dried flour corn with 2 tablespoons pickling lime (food-grade calcium hydroxide) and 6 cups water for 15 minutes, then soaking for 4 hours to overnight. Pour the corn into a colander and rub the kernels between your hands to eliminate the softened hulls. Once the corn has been rinsed repeatedly and thoroughly, it is ready to be used whole in recipes or ground into soft masa for tortillas or tamales.

Poet’s Note
The flesh of the drum-shaped, flame-skinned kabocha is especially flavorful, with a sweet, chestnutty quality. You can bake the stew in one large pumpkin, though you can often find smaller ones as well-in which case, just get more pumpkins, and divide up the filling. Others that run in large and small sizes are the buttercup type, the red kuri, and the related orange Hokkaido. The carnival and sweet dumpling are just individual sized. (Other options, such as the warty Hubbard squash, are tasty; but their shape isn’t optimal for this dish.)

Avoid the popular round, ribbed, thick-skinned pumpkin, such as the one developed from the less prolific Connecticut Field pumpkin in the 1970s. Stringy fleshed, tasteless, and almost inedible, it is suitable only for jack-o’-lantern carving and porch decorations. Cats like it, but it should never have dominated the American market.

Pumpkin carving was at one time a general harvest practice before it became a Halloween tradition. The jack-o’-lantern tradition was brought to America by Irish immigrants fleeing the potato famine in the mid-19th century. It is said that “Stingy Jack” sold his soul at a hefty price to the Devil and was later sent to hell; but, on the way, he scooped up a coal with a turnip he was eating. While waiting for Judgment Day, he has been using it as a lantern ever since. The turnip lantern gave way in popular practice to the pumpkin lantern, which has been referenced in the work of everyone from Washington Irving and James Whitcombe Riley to L. Frank Baum.

The giant pumpkin of the Cucurbita maxima clan is actually a cross between a Hubbard and a kabocha type. Growing giant pumpkins to ginormous proportions been a long American tradition, and the world’s record holder to date weighed in at over 2,000 pounds. When they grow especially large, though, such pumpkins develop severe cases of secretarial spread. They have been known to give way under all the pressure and explode.