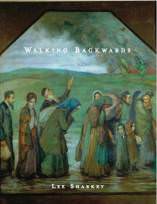 “The City” began as an exercise, an attempt to work with the form David Ferry invented in his “One Two Three Four Five”: a single word is repeated in each line of a five-line poem, placed initially toward the front of a line and with each succeeding line moving further toward its end. I didn’t adhere strictly to David’s form in my poem, but the principle of progressive repetition in his model helped me construct a parable that remains resonant for me.
I had been thinking about the idea of the City on the Hill and reading about Cities of Refuge in biblical-era Palestine, where those who had committed manslaughter were protected from acts of vengeance.
–– Lee Sharkey, in her Reader’s Companion to Walking Backwards
*
Whether you’re a teacher looking to supplement your classroom discussions or a reader wishing to dig deeper into a poet’s work, we have a Reader’s Companion for you!
*
Visit our large selection of free Reader’s Companions at Tupelo Press and see for yourself. With Reader’s Companions to Lee Sharkey’s just released Walking Backwards, Aimee Nezhukumatathil’s Lucky Fish, Thomas Gardner’s Poverty Creek Journal, and more, you’re sure to find just the right fit.