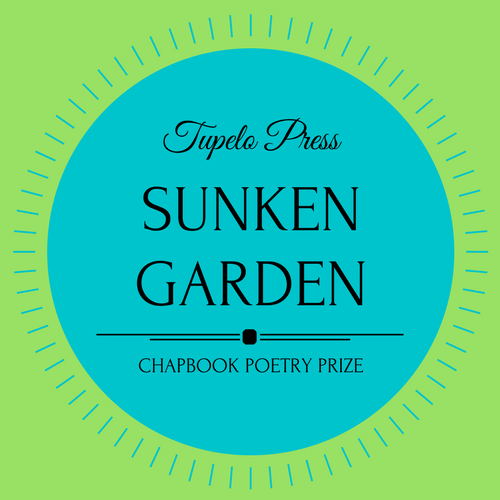 We’re pleased to announce the preliminary readers for our 2019 Sunken Garden Chapbook Prize. These talented writers will help choose which manuscripts should be honored as finalists and forwarded on to our final judge.

Ruth Awad is a Lebanese-American poet and the author of Set to Music a Wildfire (Southern Indiana Review Press, 2017), winner of the 2016 Michael Waters Poetry Prize. She is the recipient of a 2016 Ohio Arts Council Individual Excellence Award, and her work has appeared in The New Republic, The Missouri Review Poem of the Week, Sixth Finch, CALYX, BOAAT Journal, Diode, The Adroit Journal, Vinyl Poetry, Epiphany, Nashville Review, and elsewhere. Her work also appears in the anthologies Bettering American Poetry Volume 2 (Bettering Books, 2017), The Hundred Years’ War: Modern War Poems (Bloodaxe Books, 2014), New Poetry from the Midwest 2014 (New American Press, 2015), and Poets on Growth (Math Paper Press, 2015). She won the 2012 and 2013 Dorothy Sargent Rosenberg Poetry Prize and the 2011 Copper Nickel Poetry Contest. She has an MFA in poetry from Southern Illinois University Carbondale and she lives in Columbus, Ohio, with her two Pomeranians.

Anne Barngrover is the author of Brazen Creature (University of Akron Press) and Yell Hound Blues (Shipwreckt Books) and co-author with Avni Vyas of the chapbook Candy in Our Brains (CutBank Press). Her poems have appeared in Crazyhorse, Ecotone, Copper Nickel, North American Review, and elsewhere. She is an assistant professor of English at Saint Leo University, where she is on faculty in the low-residency MA program in Creative Writing, and lives in Tampa, Florida.

A writer and visual artist, Kristy Bowen is the author of six books of poetry, including the recent salvage (Black Lawrence Press, 2016) and major characters in minor films (Sundress Publications, 2015),   as well as a number of chapbook, zines, and artists book projects. Her work has appeared most recently in Paper Darts,  Handsome, and Midway Journal.  She lives in Chicago, where she runs dancing girl press & studio and spends much of her time writing, making papery things, and editing a chapbook series devoted to women authors.

Wendy Chen is the author of Unearthings (Tavern Books) and editor of Figure 1. Her work has appeared in Crazyhorse, Rattle, A Public Space, and elsewhere. Chen is the recipient of the Academy of American Poets Most Promising Young Poet Prize, and fellowships from the Kimmel Harding Nelson Center and the Barbara Deming Memorial Fund. She has been featured in the Culture Trip as one of “10 Young American Poets Changing the Face of Poetry.” For more, visit wendychenart.com.

Ruth Danon is the author of the poetry collections, Limitless Tiny Boat (BlazeVOX, 2015), Triangulation from a Known Point (North Star Line, 1990), a chapbook, Living with the Fireman (Ziesing Brothers, 1981), and a book of literary criticism, Work in the English Novel (Croom-Helm, 1985).  A new book of poems, Word Has It, will be published in spring 2018 by Nirala Press.  Her poetry has recently appeared in the anthologies, Eternal Snow (Nirala, 2017) and Resist Much, Obey Little (Spuyten Duyvil, 2017.) Her poem, “Long After (Mallarme)” was selected by Robert Creeley for Best American Poetry, 2002.  Her poetry and prose have appeared in The Florida Review, Tupelo Quarterly, Post Road, Versal, Mead, BOMB, Paris Review, Fence, Boston Review, 3rd Bed, Crayon, and many other publications in the U.S. and abroad. She teaches at the John Jay College of CUNY and has a private teaching practice in New York City and Beacon, New York.

Farrah Field is the author of RISING, WOLF AND PILOT, and the chapbook PARENTS. She lives in Brooklyn and is confounder of Berl’s Poetry Shop.

Ariel Francisco is the author of All My Heroes Are Broke (C&R Press, 2017) and Before Snowfall, After Rain (Glass Poetry Press, 2016). Born in the Bronx to Dominican and Guatemalan parents, he completed his MFA at Florida International University in Miami. His poems have appeared or are forthcoming in The Academy of American Poets, The American Poetry Review, Best New Poets 2016, Gulf Coast, and elsewhere. He lives in East New York.

Molly Gaudry is the author of We Take Me Apart, which was shortlisted for the PEN/Joyce Osterweil and a finalist for the Asian American Literary Award for Poetry. She teaches at the Yale Writers’ Workshop and is the founder of Lit Pub.

Catherine Kyle is the author of the poetry collection Parallel (Another New Calligraphy, 2017); the poetry chapbooks Gamer: A Role-Playing Poem (dancing girl press, 2015), Flotsam (Etched Press, 2015), and Saint: A Post-Dystopian Hagiography (dancing girl press, forthcoming); and the hybrid-genre collection Feral Domesticity (Robocup Press, 2014). Her writing has been honored by the Idaho Commission on the Arts, the Alexa Rose Foundation, and other organizations. She holds a PhD in English from Western Michigan University and is pursuing an MFA in Poetry through New England College. She currently teaches literature and creative writing at the College of Western Idaho, as well as through The Cabin, a literary nonprofit. Her website is www.catherinebaileykyle.com.

Carlo Matos has published ten books, including The Quitters (Tortoise Books) and It’s Best Not to Interrupt Her Experiments (Negative Capability Press). He also co-edited an anthology with Luis Gonçalves titled, Writers of the Portuguese Diaspora in the United States and Canada. His poems, stories, and essays have appeared in such journals as Another Chicago Magazine, Rhino, Diagram, and Black Ocean, among many others. Carlo has received grants and fellowships from CantoMundo, the Illinois Arts Council, the Fundação Luso-Americana, the Sundress Academy for the Arts, and the La Romita School of Art (Italy). He is also a winner of the Heartland Poetry Prize. He currently lives in Chicago, Illinois, is a professor at the City Colleges of Chicago, and is a former MMA fighter and kickboxer. These days he can be found writing poems on demand with Poems While You Wait and training in the exquisite art of the Italian rapier. Follow him on twitter @CarloMatos46. He blogs at carlomatos.blogspot.com.

Karyna McGlynn is the author of Hothouse (Sarabande 2017), The 9-Day Queen Gets Lost on Her Way to the Execution (Willow Springs 2016), and I Have to Go Back to 1994 and Kill a Girl (Sarabande 2009). Her writing has recently appeared in The Kenyon Review, Ninth Letter, Georgia Review, Ploughshares, and New England Review. Karyna earned her PhD in Literature and Creative Writing from the University of Houston and was recently the Diane Middlebrook Fellow in Poetry at the University of Wisconsin. She is an Assistant Professor of Creative Writing at Christian Brothers University in Memphis.

Sarah Ann Winn’s first book, Alma Almanac (Barrow Street, 2017), was selected by Elaine Equi as the winner of the 2016 Barrow Street Prize. Her fifth chapbook, Exhibition Catalog Pamphlet to the Grimm Forest Open Air Museum was released by Yellow Flag in 2018. Her writing has appeared in Five Points, Hayden’s Ferry Review, Kenyon Review Online, Massachusetts Review, and Smartish Pace, among others. She’s been the grateful recipient of residencies and fellowships, most recently from Virginia Center for the Creative Arts. She serves as reviews editor for Tinderbox Poetry Journal. Visit her at http://bluebirdwords.com or follow her @blueaisling.