“The poem should be a mixture of revelation and arrangement,” Charles Wright has said. So, ideally, should the manuscript. One hopes to find, through the arrangement of the poems, if not revelation then some over-arching structure that gives the book some larger if un-paraphrasable impression. Not everyone reads through a book of poems in order, but I believe that the experience of taking in the book as a whole should be available for those who do.

Look for all the different ways the poems can fit together—thematically, by literal subject, formally, through a specific image that can link a poem to the one that follows, more intuitively—and see what happens.

Or start by finding a poem you think would work well as a first poem, and look for the poem that could follow it, and keep going. I usually end up with my poems spread out in piles all over the floor, as if I were playing solitaire with a giant deck of cards. But it’s actually more like a game of gin rummy in which your hand is so complicated that you don’t know whether you’re going for runs of a particular suit or groups of cards of the same denomination (except that there are more than those two options).

Does the collection seem to be dividing into sections (which can give the reader breathing room) or is there an overall sectionless progression that is developing? Poems can also talk to each other across sections, and I’ve noticed that a poem that works well to begin a section (or a manuscript) often works well to end it… which means you can try flipping the whole section around, starting it with what you thought was the last poem, and seeing what happens (the order of the poems is definitely going to change).

If you have a bunch of poems that are similar in some way (ekphrastic poems, elegies for a specific person, etc.) do you put them together, or spread them throughout the manuscript like the stitches of a thread? There will be arguments for both. It can be complicated, it can take weeks or months (but get the poems off the floor at the end of each day so as not to annoy the people you are living with), and there is usually not one right answer. You can’t force it to make perfect sense, and in fact you shouldn’t. There needs to be some play, some mystery, as in a poem. Good luck! 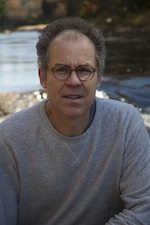 Jeffrey Harrison is author of five books of poetry, including The Singing Underneath, chosen by James Merrill for the National Poetry Series in 1987, and Incomplete Knowledge, runner-up for the Poets’ Prize in 2008. A volume of selected poems, The Names of Things, was published in 2006 in the United Kingdom. A recipient of Guggenheim and NEA Fellowships, he has published poems in The New Republic, The New Yorker, The Nation, The Yale Review, and many other magazines and anthologies, and has taught at a number of colleges and universities, and at Phillips Academy, where he was Writer-in-Residence. He lives in Dover, Massachusetts.

Learn more or submit to the Dorset Prize here!