If you’re reading this, you’ve likely been here before, casting your manuscript into the vast gray world of maybe. You know that most successful contest-winning manuscripts make the rounds for multiple years—certainly my own Dorset-prize winner, Biogeography, did—before finding their home. Your manuscript may have been a finalist or semi-finalist last year, for multiple years, for this contest, for others; you may have accumulated years of form letter rejections. You may be questioning the whole process of submission, your abilities as a writer, the point of going on. (Who doesn’t, I wonder?)

So, should you go on—meaning, should you submit this manuscript? Let me ask you—self-flagellation and ego aside, do you still believe, on good days, in these particular poems? Yes? Can you do anything to make them stronger? No? Then go on. Despite the odds, go on.

You’ve already revised and revised (and revised) every poem. You’ve likely reordered the manuscript multiple times, considering the arc of the whole, how the poems accrue and resonate. Perfect. Now, before you send the manuscript back out into the world, remember that for readers to travel through this gorgeous structure you’ve built, you first have to get them through the door. The first poem of a collection serves as that doorway.

Reconsider your opening poem. Ask yourself: which poem(s) in your manuscript best honors the identity of this marvelous, sui generis world you’ve created—its echoing music, its imagery, its voice, its story, its particular joys and sorrows? But also—which will encourage the reader to keep exploring, to turn the next page? The best first poem strikes this balance of introduction and intrigue.

Then, consider your collection’s final poem. Is this really the best poem to end with? Is there perhaps another that better creates an exit that makes the reader feel the travel was worthwhile, perhaps even transformative? Is there a poem that better resonates with your opening poem, perhaps serving as a kind of call and response, musically, imagistically? This you may be able to feel more than explain. Trust those feelings.

You’ve got a book manuscript now with poems you believe in as much as our human propensity for doubt will allow, with a doorway that readers can’t help but enter and an exit that leaves them at once wishing to linger and grateful for the journey. Now, let it go. Submit.

Wishing you all success—and keep writing! 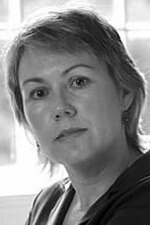 Sandra Meek is the author of five books of poems, An Ecology of Elsewhere (Persea Books, 2016), Road Scatter (Persea Books, 2012) , Biogeography, winner of the Dorset Prize (Tupelo, 2008), Burn (2005), and Nomadic Foundations (2002), as well as a chapbook, The Circumference of Arrival (2001). Her sixth book of poems, Still, is forthcoming from Persea Books in 2020. She is also the editor of an anthology, Deep Travel: Contemporary American Poets Abroad (Ninebark, 2007), which was awarded a 2008 Independent Publisher Book Award Gold Medal. A recipient of a 2011 National Endowment for the Arts Fellowship in Poetry and the 2015 Lucille Medwick Memorial Award from the Poetry Society of America, she has three times been awarded Georgia Author of the Year in Poetry.  She has also twice been awarded the Peace Corps Writers Award in Poetry. She is Co-founding Editor of Ninebark Press, Director of the Georgia Poetry Circuit, Poetry Editor of the Phi Kappa Phi Forum, and Dana Professor of English, Rhetoric, and Writing at Berry College.

Learn more about or submit to the Dorset Prize here!