Kill Class is based on Nomi Stone’s two years of fieldwork in mock Middle Eastern villages at military bases across the United States. The speaker in these poems, an anthropologist, both witnesses and participates in combat training exercises staged at “Pineland,” a simulated country in the woods of the American South, where actors of Middle Eastern origin are hired to theatricalize war, repetitively pretending to bargain and mourn and die. With deft lyrical attention, these documentary poems reveal the nuanced culture and violence of the war machine—alive and well within these basecamp villages, the American military, and, ultimately, the human heart.

“The poems weave recorded language from actors and soldiers with descriptions of the ‘games’ collected over Stone’s two-year anthropological study at Pineland….Pineland’s setting allows the poet to explore the morality of war from a perspective that is analytical and viscerally haunting.” —Publisher’s Weekly

“Stone’s Kill Class offers a searing and tender series of observations about the Iraq War. In these poems, Stone dissects violence and the vulnerability of being human with the stunning clarity and singular insight of her anthropologist’s eye. She observes, ‘The country/ is fat.  We eat/ from its side.’” —Eliza Griswold, journalist and New Yorker contributor

“Kill Class is unsettling, arresting, essential. The poems insist we listen to war’s distant cry, its close sigh, to the wreckage of language, to the questions buried and excavated, to worlds lost, to faces ‘sent to sea,’ to hearts incapable of translating other hearts. Nomi Stone is an invaluable voice.” —Nathalie Handal, award-winning poet

“The poems weave recorded language from actors and soldiers with descriptions of the “games” collected over Stone’s two-year anthropological study at Pineland….Pineland’s setting allows the poet to explore the morality of war from a perspective that is analytical and viscerally haunting.” —Publisher’s Weekly

“Just as tenderness is written into the poems, so is uncertainty. I loved Stone’s use of brackets and slashes: they cut up the poems, but also, enact a choice left to the anthropologist or to the reader: we are witnessing something staged.” —Jennifer Martelli, Up The Staircase Quarterly

Read the full Up The Staircase Quarterly review here.

“Stone has an edgy voice and a sharp sense of the music of words….she is able to make this anthropological excavation into something both beautiful and haunting, laced with double meanings: ‘The people speak// the language of a country we are trying/ to make into a kinder country.’”—Craig Morgan Teicher, NPR 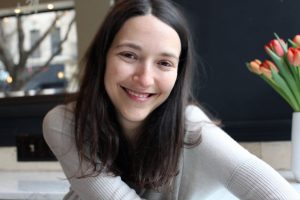 Nomi Stone is a poet, anthropologist, and author of a previous book of poems, Stranger’s Notebook (TriQuarterly, 2008). Winner of a 2018 Pushcart Prize, Stone’s poems appear recently in POETRY Magazine, American Poetry Review, The Best American Poetry, The New Republic, Tin House, New England Review, and elsewhere. Stone has a PhD in Cultural Anthropology from Columbia University, an MPhil in Middle East Studies from Oxford, and an MFA in Poetry from Warren Wilson College. She teaches at Princeton University and her ethnography in progress, Human Technology and American War, is a finalist for the University of California Press Atelier Series.

Stone will read from Kill Class at the following public readings:

To purchase the book, please visit this link.

A free Reader’s Companion, suitable for course adoptions for educators, is available for download here.

Tupelo Press is an independent, nonprofit literary press, in its 20th year of publishing transcendent poetry and prose in books that are as rewarding to hold as they are to read. Tupelo Press discovers and publishes works of poetry, literary fiction, and creative nonfiction by emerging and established writers, and publishes an online literary journal, Tupelo Quarterly. Its home office is in North Adams, Massachusetts. Learn more at www.tupelopress.org.