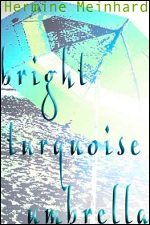 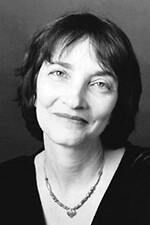 Hovering between the autobiography of a life and of a dream, Hermine Meinhard’s debut collection, Bright Turquoise Umbrella, revisits, and revises, a pantheon of scenes, objects, colors, and movements as the speaker strives to locate herself in her own life, in other words, to remember. The collection’s problem, or structuring anxiety, however, is that “When you have something to say, no one believes you.”

What is the difference between a dream and a memory? Both involve acts of recalling/retrieving that which has already been. While this collection is certainly inventive, its fictions seem more found than repositioned in these poems of prose and line, piece by piece, valued for their effects perhaps more than their integrity or personhood. Many are faceless; the speaker describes “a long haired man with no face,” “the child in the courtyard at home with the red eyes and no face—almost no face,” and makes “the inevitable contact—a man with no face. He, however, wore a grin.” This grin later connects two nameless figures—”…you were standing there wearing the last suit I saw you in. I said, ‘Stop grinning.'” These figures are slippery, and often traceable only through a gesture or isolated feature, or as I’d like to say, through their effects. More often than not the speaker herself is transformed, and every bit as difficult to lay hold of. Given the collection’s founding trauma, this may very well be the point.

If Meinhard’s collection were a wave, we would begin a its crest and then proceed down, occupying the curl between air and water, aware of the fact that though we’ve already seen as far as we will, there is more to be gleaned from the plunge downward. After all, it is the wave’s conclusion that makes the greatest impact. But let’s begin in the middle of the collection with its title poem, “Bright Turquoise Umbrella,” which operates like a pivot or hinge.

I asked the octopus a personal question
about his arms.
I bent back my thumb, separated my fingers
like scissors. He quietly moved away.

The sea was filled with red weed which wrapped
itself around my legs. When I emerged,
nothing was familiar: my knee, with the brown mark
like a chicken eye—my toes, little boxes, the pinky
straying like a wild hair.

On the beach was a red blanket, a beach ball, a bright
turquoise umbrella, and a man.
He was making lunch, slicing fish onto bread,
cutting up a peach.
There was orange juice and milk on the blanket,
and music from a radio—and the man’s feet,
which stuck out over the edge of the blanket,
moved to the music.

He looked up and gave a little wave. My hair was still wet.

Like the double-jointed thumb it invokes, this poem sends the reader both forward and backward in the collection. Questions posed, such as the one put to the octopus about his arms, are answered, albeit obliquely, a few pages on when the speaker confides: “…And in my body, my arms are / signs of God’s long fingers, which is how I know that I will love you.” Arms are signs of God’s fingers, of love, but recalibrated in terms of an octopus, too much of a go(o)d thing can start to frighten. This poem, “Web,” also suggests its own question: “And everywhere is some kind of sign. Like yesterday, on the soup can, / a little rip in the label, pointing to the ceiling, and when I looked up / there was a crack which meant—bad things in store. // You ask how I know when I see a sign.” Besides the joke about canned soup being something “bad in store,” this poem reveals the most coveted source of knowledge in the speaker’s world: the sign, and in close attendance, superstition, fear, and “all of the sadness of your life.”

We follow “Web” backwards along a thin thread to “The Mother,” appearing early in the collection, where we encounter other equivalents for rips and cracks: “a convex bicycle mirror” opens “like a hole on the dark street”; “You could see a small dark object… Through the torn slats which the Mother did not see”; and “You could see a rip in her brown dress like someone had made a peephole into some place black in the Mother which no one else could see.” Here a “hole,” “torn slats,” a “rip,” a “peephole,” connect what might be minor imperfections with profound acts of seeing or, on the other hand, going, even willfully, blind. Meinhard’s collection refuses such blindness; “a little blind dog” in “Planet” becomes in the adjacent poem, “Kinder,” “the little dog with one eye.” Opportunities for vision are offered relentlessly to combat the difficulty of seeing.

What is difficult to see? Here, the collection returns to its originating trauma, the speaker indicating: “On my body the marks of something, a long insect, a long strong insect.” In this case the “e” in insect acts as the hinge, transforming “insect” into “incest.” The title of this poem, “Flying,” might point to flying away or toward something, perhaps some knowledge, and also recalls the proverbial fly on the wall who stays and sees everything, hears and knows all: “and above me are the fans— / and a fly— / and the fans” and later “fly said it was a good wind / and the wind was lonely / and wanted you.” “The Wind” is the title of the collection’s first subsection in which the speaker’s trauma is most explicitly explored. In rapid succession we are introduced to “Father” who appears in various forms: as “a man with an axe, carrying a baby on his back”; as a refrain—”in the twilight of morning before Father comes to the room // And reaching under the bed and finding animal paste and pasting it all over me // And a terrible smell—a terrible smell—early in the morning—that comes from the alley after Father leaves the room,” and later in “Saturday Morning,” “On the ceiling, watching, a fish, / my jaw stuck / open when father left the room”; as a “wind blowing at the curtain, /wind, pushed through the last of something in her, / something was taken away”; and as himself:

There was a crack in the corner of the roof. I sat down and ran my
finger across it. The crack was a mosquito trapped forever.

My father laughed when he found me kneeling over it. He threw me
down. The sky was white. He laughed. He shoved himself into me
again and again.

There is not room to do justice here to the dense folds of equivalents, mimicries, tears, and transformations: all intimacies as canny as our own dreams, they cannot but preserve their mystery. The canny reader will relish this book as their own, learning steadily more about what cannot be known.