April at the Ruins

“Every poem in April at the Ruins is a powerhouse: rich, quietly essential, profoundly lucid. Many have flavors of the best parables or folk tales, bringing us into intimate relation with mysteries and transformations abounding around and inside us…. Raab’s sense of irony is unerring. These poems prove that one of the only true forms of consolation is giving darkness its due.”

Lawrence Raab has long been one of American poetry’s most authentic, most perfectly modulated voices. Yet in these new poems, he boldly risks unguarded measures and urgent sounds. This is a book of summonings: into the dark wood; into the night music which might be, if memory proves to be something other than an abyss, the frontier of eternity. There are supernal tensions on every page here, and everywhere, just at the horizon, unprecedented daybreak.

Every poem in April at the Ruins is a powerhouse: rich, quietly essential, profoundly lucid. Many have flavors of the best parables or folk tales, bringing us into intimate relation with mysteries and transformations abounding around and inside us. The book’s title accurately encapsulates Raab’s role as negative capability ninja, evoking both spring’s beginnings and the flotsam and jetsam of endings. Opposite possibilities and alternative scenarios thrive side by side within the marvelous, snow-globe-like worlds of his poems: what did happen or what might have, the questionable nature of revelation, the slipperiness of the stories we tell ourselves, how we live suspended between death and utter loveliness. Raab’s sense of irony is unerring. These poems prove that one of the only true forms of consolation is giving darkness its due.

The poems in Lawrence Raab’s April at the Ruins are rooted in the acknowledgment that the past we live with is in good part dream and fairy tale, that our present seems curiously frail and ephemeral, and that life viewed in retrospect appears by turns accidental and inevitable. By refusing to reach easy solutions, by a willingness to find a home in uncertainty and doubt, the poems achieve an integrity that is bracing and deeply moving.

Lawrence Raab is a genuinely dark philosophical poet, a lifelong and expert student of lucid dreaming and paradox— the sensation of waking up to the fact of being asleep. His poems lead you into, then trap you, in strange worlds, boxes constructed of story, logic, and aphorism, which are then revealed to be exactly like life itself.

In these poems Lawrence Raab confirms what his fans have known for years, that he curates the Museum of the World, an institution of the mind that will outlast all the brick and mortar ones. Everything is here, and in the right amount. Like the monks who light their candles even after all the monasteries close “because / they always had,” Raab comforts us, shapes our days, makes gifts of them. How grateful I am to have these poems in my life.

As your ophthalmologist knows “peripheral vision” so do Lawrence Raab’s brilliantly quiet poems know the wisdom, the eureka moment, the terror, and the ecstasy, that slip away to the side of us, tantalizingly half-seen…the way it is in “real life,” that is, your life and mine. Raab is our best explorer of our parallel existences, of not-knowing, of unaccountable absence, of things hinted at but hidden—and in a time of poem-as-shrill-declamation, his grown-up’s forays into that misty realm of daily mysteriousness provide a deep pleasure. (Not that he can’t be funny, mind you: check out “Twilight.”) The train, as depicted by Magritte or de Chirico, is about to leave the station: all adults aboard! 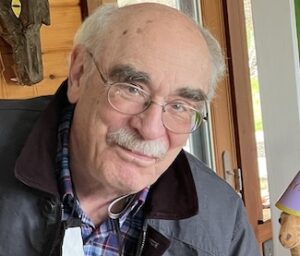 Lawrence Raab is the author of nine books of poems, including Mistaking Each Other for Ghosts (Tupelo, 2015), which was longlisted for the National Book Award, and named one of the Ten Best Poetry Books of 2015 by The New York Times. An earlier collection, What We Don’t Know About Each Other (Penguin, 1993) was a winner of the National Poetry Series and a finalist for the National Book Award. His most recent book of poems is The Life Beside This One (Tupelo 2017). He is also the co-author (with Stephen Dunn) of a chapbook of collaborative poems, Winter at the Caspian Sea.  In 2016 Tupelo published his collected essays, Why Don’t We Say What We Mean? He is the Harry C. Payne Professor of Poetry Emeritus at Williams College, where he taught for forty-two years.