“Bellini in Istanbul (Tupelo Press) by Lillias Bever is a collection of poems that combines an assaying of Bellini’s being hired as court painter for Mehmet in 1479, notions of Cesarean delivery and archaeological excavation, with memoirs of a love affair between a visiting American and a Turk.”–Kirk Robertson, Lahontan Valley News and Fallen Eagle Standard

“Bellini in Istanbul has the finish of voice present in the best poetry, the report on experience and travel of the most interesting people, and the reflective tone of a cultivated inner voice. Though I treasure its descriptive pieces—Italian scenes, Turkish fish markets, comments on and condensations of The Blue Guide—what is the most touching are the poems that intermingle the exotic with the deeply personal—the assessment of a relationship gone bad in a foreign land, then considering a new one aborning; the carrying and birthing of a child thought in terms of Greek myth, and the crisp observations of the world turned into signifiers of the dreamwork which is poetry. Lillias Bever is a gorgeous poet, traveled and travailed, seeking a home in her own strophes.”—Garrett Hongo, author of Volcano: A Memoir of Hawaii

“Reading Bellini in Istanbul, I was constantly reminded of Calvino’s Invisible Cities, for Lillias Bever’s richly-textured poems ‘arrive,’ as she tells us, at ‘the boundary or our lives… saddled in the smoke of the other world.’ This smoke is a form of memory and invention, a gauze or veil, through which we find the borderlands of experience to be an expansive geography, where what is real is imagined and what is imagined is real. Bellini in Istanbul is a sophisticated book, a formal and imaginative tour de force.”—Michael Collier, Judge, 2004 Tupelo Press Contest for First Books of Poetry

“Winner of the Tupelo Press Judge’s Prize, Bellini in Istanbul is a compilation of free-verse poetry featuring absorbing descriptions of Italian scenes, Turkish fish markets, and other exotic locales as well as deeply personal difficulties. The end of a relationship turned sour in a foreign land, followed by the creation of a new one; the pain and wonder of bringing a child into the world; and the eternal search for meaning in life make for an unforgettable poetic experience. ‘Ezan’: ‘In Bebek, a famous tenor calls / the ezan from Kemalettin’s elegant, dove-grey mosque, // his voice spilling like noon light over the park. / It’s Friday. The devout are washing // off the morning’s dust, their shoes lined up / neatly at the lip of the public fountains.’”–Wisconsin Bookwatch

The Baltimore Review’s Colleen M. Webster has written a erudite and thoroughly compelling review of Bellini in Istanbul.

“While these poems plunge the reader back five centuries, they also serve to remind us that poets, too, often serve a harsh muse. Surely one of these ministers to Bever, who as we move back and forth, museums, to dusty roads, to operating tables, parses out stringently her own suffering and her awareness of it in others.”

The rest of this this review can be read here.

Bellini in Istanbul (Tupelo Press) by Lillias Bever is a collection of poems that combines an assaying of Bellini’s being hired as court painter for Mehmet in 1479, notions of Cesarean delivery and archaeological excavation, with memoirs of a love affair between a visiting American and a Turk.

The metaphors take on personal resonance in evocations of the cultural clash in contemporary Istanbul, her doomed romance across the straits that separate us, and meditations on the presence of blue in everything: evil eyes, the breath of possibility, how memory becomes mnemonic.”

Alexis M. Smith, reviews editor for Tarpaulin Sky, has written with great perception about Bellini in Istanbul, concluding with the lines,

“The simile of stepping away from a book is an apt one, because it conveys the sense of history as a series of narratives—books written or not, stories told and forgotten, rediscovered and told again. Throughout Bellini in Istanbul we sense the poet’s yearning to preserve experience for the sake of the narrative; and that, ultimately, is what makes Bever’s efforts so satisfying—it feels as if we are participating in a small part of the chronicle of human experience.”

The Oregonian’s BT Shaw  has reviewed Bellini in Istanbul., which reads in part:

In all three sections, Bever’s ideas—like William Carlos Williams’—are in things. ‘Teaspoons, dental probes, scalpels, ladles / spoons with bowls bent back at an angle’ is the way a poem called ‘Tools’ begins. Another, ‘Catalogue,’ makes a list—‘Bullets that collide / in mid-air, / broken tobacco pipes, / a shoe / with the foot still in it’—and becomes itself proof that the whole is, sometimes, more than the sum of its parts.

The event at the center of this refreshingly conceived cycle of poems is Italian painter Gentile Bellini’s sojourn in Istanbul in 1479. Poems undulate out from this experience as the poet carves poetic sculptures that explore the themes of art, archaeology, and the idea of cultural transmission. These insightful contemplations are delicately honed by the author’s own experience in Turkey, ultimately fashioning a mirror to history that reflects the landscape of self. 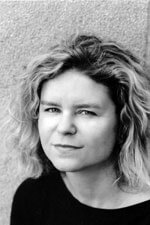 Lillias Bever grew up in Princeton, N.J., received a B.A. from Vassar College, and an M.F.A. from the University of Oregon. Her work has appeared in Poetry, Gettysburg Review, New England Review, Seneca Review, Pleiades, among others, and has been featured on Poetry Daily. She has been a resident at the MacDowell Colony and the Millay Colony for the Arts, and the recipient of a Seattle Arts Commission award.

From nicks and scratches on a vessel
she can trace its life, how it was used
to hold or pour liquids, wine, water—
and the place, worn thin, where hands gripped it
by its ear-shaped handle, the small chip
where it perhaps survived a fall, but
bounced to live again—to her, gorgeous
with use, even more than, or despite
its design of underwater life:
fishes and octopi in black paint,
seaweed, fins, spiraling tentacles
weaving and interlacing across
its surface: a submarine vision
she thinks of now, looking down
at her submerged self, which once held life—
tracing across her belly, her thighs,
the use-marks, fluent patterns of wear.

CALLED TO THE OTTOMAN

In 1479, after sixteen years of war,
an uneasy truce has sprung up
between the two republics:

Venice, most powerful of the Italian states,
and Istanbul, new capital of the Ottoman Empire
and scourge of the Western world:

European monarchs are urged to launch
a fifth crusade: the Pope, the Holy Roman Emperor,
the King of France; the Sultan is surrounded

by foes: Hungary, Austria, Genoa—
Venice alone has made fourteen attempts to poison him.
When, in this dark time, a Jewish orator from the Lord Turk

arrived with an invitation to a wedding, and a request
for “a good painter,” the Doge, declining
the invitation, complied

with the request; and in September
Gentile Bellini, son of Jacopo,
brother of Giovanni

and official painter of the Venetian Republic,
took passage aboard a Romanian galley
and watched the Serenissima dwindle into the mist;

as the silver sweep of the Adriatic opened before him
like a vast canvas
on which nothing is written, but light.

IN THE TREASURY OF SWORDS

Tribute Sword
My hilt was fashioned in Samarkand,
inlaid with Indian emeralds and Persian gold.
My scabbard is of parrot’s beak.
With my hand-painted girdles
set with glittery diamonds, I’m lovely.
I can see myself reflected in every mirror.
My desires are aesthetic;
I’ve never tasted blood.
But handle me with care: I’m sharp
with idle luxury.

Janissary’s Sword
I’ve slain six viziers, three pashas, an aspiring sultan.
I’ve a majestic heft: a weight I’m proud
only the strongest hands can bear.
Victory’s mine, I never fail—
I swagger to the mehter’s trumpet and drum—
See these two jeweled balls
on either side of my hilt?
After I’ve plunged
as far as I am able, I feel them ring.

Harem Sword
For years I rode the chief eunuch’s
silken hips.What he could not deliver
I gave for free. Steam misted
my blade, I cut the perfumed air—
when the women saw me
dance, they cried
out loud and tore their hair.

Executioner’s Sword
I’m stately and precise.
I adore a ritual.
To execute something well
is my greatest delight.
If life’s a play, I see it through
to the final act: the heads
roll, the crowd roars—
afterwards, I take a bow
in the cool waters of the fountain.

Dessert Knife
I was stolen from a sherbet tray.
She keeps me close. I can feel her breathe.
Her skin smells lovely, like a rose
at the moment of its opening—
I could live here forever, in the nook
between her breasts.
I know she has a plan for me.
At night she touches
my blade, strokes its modest length.
Murder, revenge, selfprotection,
I don’t care—
I’d do anything to stay
close to her pounding chest.

Jeweled Scimitar
What do you see in me?
Do you think I sleep
the sleep of the innocent
inside my dark red velvet case?
The slave spent hours
trying to clean the blood
off my handle: répoussé work engraved
by hand, emeralds and diamonds
set within their stone compartments,
and at my handle’s tip, the stopped
clock with the ruby lid
that had carefully counted down the moments.

Small Knife
Palace politics. I do the dirty work.
I know what it is to be a slave.
I know I’m plain: I’m kept inside
the palace guard’s leather boot,
snug against his hairy ankle.
Assassinations, conspiracies,
I’ve played my petty part—
but this last time something changed.
The girl was cornered, stared
transfixed as I leapt flashing out
then clattered to the pavement stones.
No one knows the role I took
at the final moment: how I broke
myself in two, and saved her.