“[D]ivulges the spirit of a sensualist and the habits of a contemplative; sometimes vice versa. Colors are separated with the veracity of paint. Shifts in temperature are registered and background noises distinguished, not only for texture’s sake but for their essential contribution to the poems’ substance. Fine foods are sung and individual words lit. For company Sajé summons a curious assortment of lettered forbears including Cotton Mather, Henry Vaughan, Nietzsche, Proust, Gertrude Stein, and Mary Shelley. A virtuous and subtly depraved book is Bend.”
—C.D. Wright

Bend is  reviewed in Redactions.

Bend is reviewed by Andrea Ludlow for the October 3, 2004 issue of  Deseret Morning News.

Bend celebrates the pleasures of language with wit and great humanity.

Bend is a literary tour-de-force exploring themes of transformation.

Bend is fun to read; it offers its substance with a smile.

“Natasha Sajé’s new book Bend divulges the spirit of a sensualist and the habits of a contemplative; sometimes vice versa. Colors are separated with the veracity of paint. Shifts in temperature are registered and background noises distinguished, not only for texture’s sake but for their essential contribution to the poems’ substance. Fine foods are sung and individual words lit. For company Sajé summons a curious assortment of lettered forbears including Cotton Mather, Henry Vaughan, Nietzsche, Proust, Gertrude Stein, and Mary Shelley. A virtuous and subtly depraved book is Bend”—C.D. Wright

“The language of Sajé’s poems dares the world to be delightful and I’m delighted to see it rise to the challenge. Guillevic once hoped that poetry would “do to things what light does to them,” and Sajé’s poems do just that, waking up the plants, pleating the landscape like an accordion, giving fruits their Zurbaran-like precision in bowls of perfect sunlight. There is also the sure-footed gliding into the absence of light for an occasional raid of revenge into the past. Sajé’s light-language reflects and shocks the objects it considers before they know what touched them. A second reading is inevitable”—Andrei Codrescu 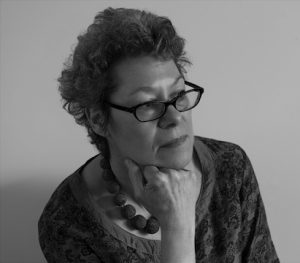 Natasha Sajé’s first book of poems, Red Under the Skin (Pittsburgh, 1994), won the Agnes Lynch Starrett Prize, and her second collection, Bend (Tupelo, 2004), was given the Utah Book Award in Poetry. Her book of essays Windows and Doors: A Poet Reads Literary Theory will be published by the University of Michigan Press in 2014. She teaches at Westminster College in Salt Lake City and in the Vermont College of Fine Arts MFA program.

A Minor Riot at the Mint

Custome is the most certain Mistresse of language, as the publicke stampe makes
current money. But we must not be too frequent with the mint, every day coyning.
—Ben Jonson

Into my pocket slips a folded note, creased
like labia, cached with private promise.
Pea blossoms in broth. And my in petto
pleasure in thinking the missive
for me, the edges keen against
my thumb, my plotting to be alone and open it.
Is it tame as a Hepplewhite chair
or nubile as a pitchfork?

The ship rolls through open water,
dirty in the bay around Rio.
I’m a crazy sailor on the gravy boat,
a woman of means. This letter’s mine only
till St. Geoffrey’s Day, and if
the paper degrades, that’s how it goes
with money. I’ll wave the wealth
where any frigate bird can snatch it.

O my mackintosh,
my bilbo, my cistern, my confiture,

I love you so much you breathe me away.

We Saw No Caribou

except on metal signs, the cartooned
antlers ungainly, black against yellow.

made their way into the blue dusk?
We drank their water, ruddled from the rocks,

and shared their air, as clean as absence.
We would have photographed them, of course,

along with the Montmorency Falls, the Île
d’Orleans, notched on memory’s belt, accreted.

And if we had beheld caribou, moose—or cougar!—
would the sight have blessed us

like the Shroud of Turin
or simply been allied with one moment,

contained in time by the word vacation?
In a Bierstadt painting, they’d be larger

than the Indians, smaller than the sky, part
of the grandeur. Disney would make them

friendly, laughable and safe. In a zoo
we’d call them forlorn, circumscribed by fake

rocks and pools. In our photographs
a sheared fur of trees wraps the hills.

Below us the lakes stretch and curl.
Around our bodies an altitude, around

our heads a nimbus. And in the center,
freed of their anchor in God, our eyes

look back at our immanent selves.

The Philosopher’s Name Was Misspelled Everywhere

Man is the cruelest animal. She wanted to sleep with the philosopher, she wanted to feel the warmth of his back against her chest. Some people had trouble with the consonants, others reversed the vowels. He made her think—that was his gift. She wanted to name a restaurant after him, the offerings cued to his epigrams: Bellwether Pie, Christian Vice Pudding.  The abdomen is the reason why man does not easily take himself for a god, he had said. She was always hungry but she knew words wouldn’t feed her or save the Tutsis in Rwanda. When she thought of genocide, she wished she could lose her appetite. Of course he’d been dead longer than the million Tutsis who had been macheted into pieces. A low-tech war. Unimaginable, she would have said, a hundred years after the philosopher’s wisdom: the savage appetites of ordinary people turned to killers turned back to ordinary people.

Marcel at the Station House

If you find yourself being questioned about a crime you did not commit,
resist at all costs the impulse to be helpful.
—Social psychologist Richard Ofshe

Where were you the night of July 10?

I am unable to say from what place, from which dream, anything comes.

If you were to commit a crime…

I would prepare the hundred masks that must fit a single face.

You would plan it?

How many persons, cities, or roads does jealousy make us eager to know? I’d think about details.

You went out to dinner that night?

I observe, I speak with servants, I remember.

But sometimes you do the things you think about?

Nothing is as satisfying as the imagination’s rendering of it.

Because you have a bad memory?

Hours go by and I remember the tremors in my thighs.

So how do you…

I like to watch famished rats clawing and biting each other.

The day my mother died she took her little Marcel with her.

And how did it feel when you first put your hands around her neck?

A slight ripple, like sipping linden tea or feeling a fingernail trail against a taut stomach.

What was she wearing?

A Fortuny gown, pleated red silk, and diamonds. Red shoes, of course. Everything of those days has perished, but everything was born again.

Did you love her?

I prefer to remain closeted with the little person inside me, hymning the rising sun. He would make me happier than she.

I’d curl it to face the photographer. I’d wear my velvet jacket, and the apple trees would expose their broad petals of white.

You were nervous? You pitched the body in the trunk?

I am acquainted with sin, in one form or another. Dostoevsky writes about murder, but did he commit it? Laclos was the best of husbands.

I don’t invent things. I’ve become braver, thinking of my journey into the self like rappelling down a well without a rope.

You used a rope?

I’d like to try a polygraph, if that’s all right with you.

Wonders of the Invisible World

Muses are no better than harlots
—Cotton Mather, 1726

Strange that he mentions muses.
Demons, yes. God, of course.
But harlots? Perhaps

in his last year, nearly
destitute, having out-lived
thirteen of his children,

another sorceress nuzzling
his ears about the price of flesh
before spinning it into words,

and he knew that she too would leave
him bereft of a sweet and wicked
sustenance. Or perhaps he remembered

thirty years before, the Time of the Devils
coming down in great Wrath,
too many Tongues and Hearts

set on fire of Hell,
and imagined a world pervaded
by a cutting yellow wind

with wraithlike women moving
soul to soul, streaming like water
off a roof, flooding the mouth of every man

who had ever meant to hang them.

The Art of the Novel

or a man who is penniless. A Simple Story.
Ruined. As if a woman were a building and love

centuries of bad weather.  A mirror carried on a highway,
said Stendhal, and in the case of Emma Bovary

or Lily Bart, a highway to hell, with me riding shotgun.
Did I like the relentless bleakness because Emma’s not

me, or because she could be me? Years spent in a haze
of fiction, living through characters, writing about them,

except today she starts her own company.
But I’ve had it with this form of desire, this

continuous dream: I can’t read in the past tense,
those surprising but inevitable endings. So farewell, Tess,

Moll, and Clarissa; Miss Bennett and Miss Milner;
Isabel and Scarlett. And for the record, novel,

I abandon you—you who are, Lukacs said,
the epic of a world abandoned by God,

you who made my world bigger and kept me on the beltway,
life transformed into destiny. My odometer’s clicked

past the point of counting. I now prefer footpaths, or no paths,
and thickly wooded country, the moon.

you are, not were nor will be—

as cataracts & creeks, as river brown as trout,
as kidney and as skin.

Water you are, not were
nor will be

without wind enough to twirl the one red leaf.

What channel does my soul seek?

snow melting from trees like rain, a clean rinsing,
a quickness the sun has kissed—

and this—siphoned through sulfurous rock, glacier
old as amaranth.

I stray and roam.

To be useful, to be clear—