“Christopher Merrill’s Boat is an extraordinary and complex collection of dissident poetry. Merrill’s gift lies in the laser-like precision with which he dissects memory, love, politics, and faith. The poems assume forms as diverse as traditional narrative and prose poems as well as translations. His human rights message is simple and direct. Our highest ethical imperative as human beings is to question injustice and the abuse of power no matter where it occurs.”
— Sonja James, The Journal of West Virginia

Like Neruda and Paz, Perse and Milosz, Christopher Merrill is both a writer and a cultural envoy, crisscrossing the globe as chronicler and courier. Boat records a series of passages over a decade, employing varied formal strategies: meditations and fantasias, prose poems and versets, lyric sequences and narratives, translations and ghazals. Composed in war zones and embassies, refugee camps and monasteries, Boat is a logbook tracking questions of memory, the body and body politic, faith, mortality, and the ways of knowledge moves through generations. Reflecting ten years of life on the wing and forty years of writing, including extensive translation from other languages, Boat bears witness to what Merrill has heard and seen in places most Americans will never visit. 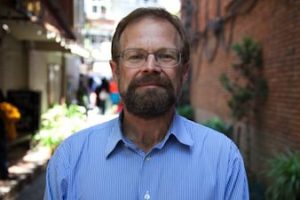 Christopher Merrill has published six collections of poetry, including Watch Fire, for which he received the Lavan Younger Poets Award from the Academy of American Poets; many edited volumes and translations; and six books of nonfiction, among them, Only the Nails Remain: Scenes from the Balkan Wars, Things of the Hidden God: Journey to the Holy Mountain, The Tree of the Doves: Ceremony, Expedition, War, and Self-Portrait with Dogwood. His writings have been translated into nearly forty languages; his journalism appears widely; his honors include a Chevalier from the French government in the Order of Arts and Letters. As director of the International Writing Program at the University of Iowa, Merrill has conducted cultural diplomacy missions to more than fifty countries. He serves on the U.S. National Commission for UNESCO, and in April 2012 President Obama appointed him to the National Council on the Humanities. Merrill was awarded a 2019 Guggenheim Fellowship in General Nonfiction.

All’s aslant—the tilted shade of the lamp
Flickering in the living room; the flashing
Torn from the chimney and the roof; the rain
That lodges in the walls. How far I’ve strayed
From everything I loved. The ceiling sags
Under boxes of correspondence. Leaves
Fall on the stalks of the sunflowers severed
In the wind storm. The turret of a tank
Parked on the ruins of a theater
Swivels to aim at the archaeologists
Entering stage left, where the prophet waved
A rod cut from an almond tree. Called
To root out and pull down, to build and plant,
He would become a city unto himself,
Walled off from everyone. A car packed with explosives
Stalls at a school. A teacher squints. Nothing.