“While these poems are the inner songs of the intriguing and elusive speaker, their capaciousness—including hemlock, marigolds, a menacing menagerie of animals, God, pumpkins, and paper cranes—Militello explodes open the self, making her speaker both a maze of internality and the source of the whole natural world.”
— Abigail Lee, storySouth

“While these poems are the inner songs of the intriguing and elusive speaker, their capaciousness—including hemlock, marigolds, a menacing menagerie of animals, God, pumpkins, and paper cranes—Militello explodes open the self, making her speaker both a maze of internality and the source of the whole natural world.”
— Abigail Lee, storySouth

“With echos of Plath and Sexton, a conjuring of confessionalism in the housing of myth-making, Militello manages the cult of me beautifully and deftly, letting her readers offer themselves — or any other figures they want to place within these woods and waysides — as the personalities. She provides the circumstances, the parameters of the spaces.”
— Christine Holm, The Volta blog

“Her poems are paradoxical lyrics—disorienting syntax mixes parts of speech to create strange and uneven shifts of sound and meaning. … Her speakers trudge through circumstance, confronting the futility, fleetingness, and finalities of everyday life.”
— Gabrielle Flam, Boston Review

Jennifer Militello’s poems are neither lyric meditations nor plain narratives. On the one hand, she doesn’t use ‘big’ words no one would understand, and she rarely eschews normal sentences; on the other, her figures of speech and juxtapositions almost refuse to be possible, and she doesn’t explain anything. When I read her poems in this book, I feel a wind from the north blowing a few leaves, flakes of early snow, and scraps of old paper over dry grass and streets by an empty town square on an overcast afternoon. There is no shelter; what there is is an empirical exposure to raw experience.

In the poems of Body Thesaurus, we enter Militello’s world of dream: singular, defiant, and boldly beautiful. These poems prove that language always holds the promise of the new for the poet willing to take risks. Body Thesaurus thus celebrates the raw pleasure of the psyche as it lends order to the chaos of the unconscious and thereby teaches us one of the most essential lessons of human creativity.

When I was a graduate student at Western Washington University, my favorite courses were designated “studies in.” This designation implied a hybrid class that incorporated both the scholar’s approach to a text (e.g. literary criticism) and the creator’s approach to the same text (e.g. creative writing). In these classes, we wrote critical responses to the texts we read as well as creative emulations “in the spirit” of these texts. I always imagined my professors selected books for “studies in” courses with extra care, in order that we might have the richest possible wellspring for our literary explorations. If I were teaching such a class right now, I would place Jennifer Militello’s provocative new collection of poems, Body Thesaurus, atop of my challenging, multi-valent reading list.

In her second book, Jennifer Militello uses symptoms, diagnostic tests, and antidotes to illuminate tensions of identity that are central to illness and health. An endangered psyche confronts maladies and faces gods in poems that embody the complexities of self. Selected by Marilyn Hacker as a finalist for the Poetry Society of America’s Alice Fay di Castagnola Award, Body Thesaurus examines the failing conduit of human physicality, offering beauty as a counter-stream to struggle.

“Militello is one of our richest younger poets, and the poems of Body Thesaurus are opulent in their ‘goldrush want.’ ‘Dear body I do not resent, / experiment with me,’ she implores.  Body Thesaurus is a haunted and haunting voyage through the body’s analogies, which expand to embrace whole worlds: the sensual, the material, and the spiritual.”
— G. C. Waldrep

“In the face of supreme, and therefore extreme, quietude (‘The mouth of me is bitten off’), Jennifer Militello’s poems hand us over to that other life we nightly receive in dream, a dimension at once seamless and yet so strange. Body Thesaurus proves the self in despair is a self in a state of repair. As such, these poems prove the wrongs, wrong the rights, and disarm. Wronged enough by the world (which is god) to be compelled to conduct the many instruments of the body to sing their senses disharmonious, these poems don’t merely delve the psyche’s depths, they harrow, and they harrow fantastic.”
— Cate Marvin 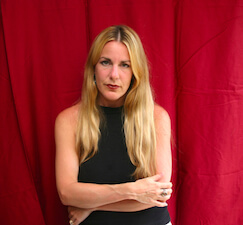 Jennifer Militello is the author of Body Thesaurus, named one of 2013’s top ten poetry books by Best American Poetry, and Flinch of Song, winner of the Tupelo Press First Book Award. She has been awarded the Barbara Bradley Award from the New England Poetry Club, the Ruskin Art Club Poetry Award from Red Hen Press, and the 49th Parallel Award from Bellingham Review, as well as grants and fellowships from the New Hampshire State Council on the Arts, the Barbara Deming Memorial Fund, Writers at Work, and the Millay Colony for the Arts. Militello teaches in the MFA program at New England College.

long in my veins like a country
of water, long like whispers darker
than the bronze of plums, than
the silence prized from the layman’s
mouth. No counting down
to the catastrophe here.
No autumns mixes of laughter.