“Finch is more shaman than formalist. She is keenly aware of the shape and sound of her poems. Whether in a chant, sonnet, ghazal, or even Billy Collins’ contrived paradelle, her skill is effortless: Form is merely the skin that allows her poems to breathe with ease.”  – Cindy Williams Gutiérrez, CALYX

CALYX, a Journal of Art and Literature by Women, has published a laudatory review of Annie Finch’s Calendars. Part of Cindy Williams Gutiérrez’s review reads: “In Calendars, Finch is more shaman than formalist. She is keenly aware of the shape and sound of her poems. Whether in a chant, sonnet, ghazal, or even Billy Collins’ contrived paradelle, her skill is effortless: Form is merely the skin that allows her poems to breathe with ease.”

Tim Morris, a faculty member of the University of Texas at Arlington, writes on enjoying the fact that Annie Finch, the author of Calendars, has no truck with gloomy poetry. A sample of his review: “… Annie Finch has never hesitated to buck a trend. An exacting technical critic in an age when most poetics is vague, a parsable formalist in an age when the strongest trends in poetry lead toward the free and the obscure, she is also a happy poet in an age (like most ages) when poets are bleak and blear.”

Michael Parker has written a glowing review of Annie Finch’s Calendars in the online journal MiPOesias. In it, he writes “At the heart of Annie Finch lies a soul whose groundwork is tilled in the art of quietude, a ’sincerity of the individual self, or soul.’ And it is this foundation that gives Finch not only an endearing quality but the credibility to represent the art in her essays….”

Calenders received a starred review from Publishers Weekly, and you can read it here

Web del Sol has published a review of Calendars.

“Annie Finch is an American original, a master of control who shows no fear of excess, and none of quietness either. With a perfect-pitch ear for the American tongue, she is a formalist as much in the tradition of Robert Duncan and Bernadette Mayer as of Hart Crane and John Berryman. Calendars is a marvelous book, filled with poems whose directness and simplicity are deceptive — they have depths and delights that appear to go on forever.” —Ron Silliman 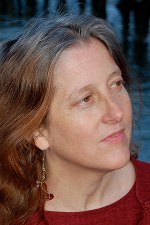 Annie Finch is author of the poetry collections Among the Goddesses (Red Hen), Calendars (Tupelo), The Encyclopedia of Scotland (Salt), and her first book Eve, recently reissued in Carnegie Mellon’s Classic Contemporaries Poetry Series. Her numerous other works include libretti; music, art, and theater collaborations; and several influential poetry anthologies. She has translated the poetry of Louise Lab (University of Chicago Press) and written books on poetics, most recently The Body of Poetry, A Poet’s Ear, and A Poet’s Craft (all from University of Michigan Press). Finch has been featured in diverse venues including Voice of America, the Metropolitan Museum of Art, NPR’s Writers’ Almanac, and Def Poetry Jam. She is a Fellow of the Black Earth Institute and was awarded the Robert Fitzgerald Prize in 2009. Educated at Yale and Stanford, she is currently Professor of English and Director of the Stonecoast MFA Program in Creative Writing at the University of Southern Maine.

Landing Under Water, I See Roots

When I cut words you never may have said
into fresh patterns, pierced in place with pins,
ready to hold them down with my own thread,
they change and twist sometimes, their color spins
loose, and your spider generosity
lends them from language that will never be
free of you after all. My sampler reads,
“called back.” It says, “she scribbled out these screeds.”
It calls, “she left this trace, and now we start”—
in stitched directions that follow the leads
I take from you, as you take me apart.

You wrote some of your lines while baking bread,
propping a sheet of paper by the bins
of salt and flour, so if your kneading led
to words, you’d tether them as if in thin
black loops on paper. When they sang to be free,
you captured those quick birds relentlessly
and kept a slow, sure mercy in your deeds,
leaving them room to peck and hunt their seeds
in the white cages your vast iron art
had made by moving books, and lives, and creeds.
I take from you as you take me apart.

Fill the earth’s belly full.
Bring the food, bring the grain.
There are cold months ahead
Give them peace in the ground.

Bring the food, bring the grain.

Fill the earth’s belly full.
bring the food, bring the grain.
There are cold months ahead.
Give them peace in the ground.

There are cold months ahead.
Give them peace in the ground.

Fill the earth’s belly full;
bring the food, bring the grain.
There are cold months ahead.
Give them peace in the ground.

Light and shadow
frame a window
that comes reaching
past a roof-edge
and becomes a hole. Sky goes
funneling to
any darkness,
cut by warped
wooden framing,
long-abandoned
by the glass that
could reflect us.

Rumbling a way up my dough’s heavy throat to its head,
seeping the trailed, airborne daughters down into the core,
bubbles go rioting through my long-kneaded new bread;
softly, now, breath of the wildest yeast starts to roar.
My hands work the peaked foam, push insides out into the light,
edge shining new sinews back under the generous arch
that time’s final sigh will conclude. (Dry time will stretch tight
whistling stops of quick heat through my long-darkened starch.)

How could I send quiet through this resonant, strange, vaulting roof
murmuring, sounding with spores and the long-simple air,
and the bright free road moving? I sing as I terrace a loaf
out of my hands it has filled like a long-answered prayer.
Now the worshipping savage cathedral our mouths make will lace
death and its food, in the moment that refracts this place.

Tupelo Press is pleased to provide the Reader’s Companion for Calendars in free, downloadable PDF format. Click on the image or this link to download. (325 K)