“Perhaps it is not a logical assumption that a collection of poems inspired by the philosophical musings in Ralph Waldo Emerson’s essay ‘Circles,’ would be especially exciting. Intelligent, yes, but compelling? Whimsical? In Dan Beachy-Quick’s Circle’s Apprentice, he conjures forth poems out of Emerson’s concepts which become not only compelling, but romantic and wild.” — Layla Benitez-James, Gulf Coast

“Perhaps it is not a logical assumption that a collection of poems inspired by the philosophical musings in Ralph Waldo Emerson’s essay ‘Circles,’ would be especially exciting. Intelligent, yes, but compelling? Whimsical? In Dan Beachy-Quick’s Circle’s Apprentice, he conjures forth poems out of Emerson’s concepts which become not only compelling, but romantic and wild.” — Layla Benitez-James, Gulf Coast

“In the quick movement of the starling and then the thrush, Beachy-Quick acknowledges the child’s circular existence—one songbird following another in disappearing succession, so similar and yet so different, kin to imagining a body’s transition to its future ghost. And only a comma separates the child from its ghost: this is not a poem of time frozen; it is a poem of time passing.”— Jenny Gropp Hess, Drunken Boat

“It is often the case that books (or perhaps more accurately poems) are a poet’s continuous, evolving response to a “something” they just can’t get to the bottom of — a place, in some cases; a person, in others. Reading Dan Beachy-Quick, I am persuaded that the compulsion to make a language for experience and memory — and the anxieties attending that necessity — together comprise just such a “something”. For though this book very much belongs to the poet’s growing oeuvre, it serves splendidly to enlarge not only a library shelf but also (especially) a realm of inquiry.”— Rebecca Lindenberg, Quarterly West

“The field is integral, too, to Dan Beachy-Quick’s Circle’s Apprentice—the field of vision, field of the empty page and of the populated page, field of self/ body/maker, absence of field. It is from these fields that Beachy-Quick enters into a conversation with Emerson et al.”— Alexis Orgera, The Rumpus

“[I]f Emerson provides Beachy-Quick with a metaphysics, it is American modernism that gives the book its formal and rhetorical peculiarities. The shape and tone of the poetry allude to T.S. Eliot’s fragments, Olson’s projective verse, and Howe’s elliptical lyricism. Lines from poetic mentors (Wallace Stevens in particular) drift in and out. Ezra Pound’s Pisan Cantos anchor the meditations of ‘Fragile Elegy,’ one of the most compelling poems in the book, and we might find in this relationship a helpful gloss on Beachy-Quick’s poetics.”— Justin Sider, Make Magazine

Dan Beachy-Quick has produced six collections of solo or collaborative poetry and a unique prose companion to Moby Dick. In the process, this amazingly productive writer has become recognized as one of the nation’s most exciting dramatists of the mind in ferment, and of our urgent and ongoing connections with a tradition that extends back to the origins of literature.

After a series of book-length poems, Beachy-Quick’s new volume is as carefully structured as a suite of chamber music pieces, yet made of distinctly individual poems. Building upon the visceral and conceptual fascinations of Ralph Waldo Emerson’s essay, “Circles,” these poems trace patterned tensions to connections in existence on many levels, from molecular to millennial.

“Dan Beachy-Quick’s splendid new collection reveals the echoes between the measure of verse and the measure of time. If it is true, as Thoreau suggests, that the poem of creation is ongoing, this ambitious and prolific poet shows us that learning to listen for that music of daily life involves a lifetime. Circle’s Apprentice vividly reminds us that all our human life may be marked by ritual but is returned to us through song. ‘The minute gears mutely whir. / To put your ear / against it is to put your ear inside it.’”—Susan Howe 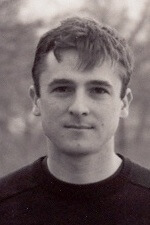 Author or co-author of fourteen books of poetry, exploratory prose, and fiction, Dan Beachy-Quick’s previous Tupelo volumes are Mulberry (2006), This Nest, Swift Passerine (2009), and Circle’s Apprentice (2011). His work has been supported by the Lannan Foundation, and he has taught at The School of the Art Institute of Chicago and Colorado State University. He lives in Fort Collins, Colorado, with his family.

Little whale, little ghost,
The world grows quiet
When you speak it most–
When you see it most
It grows blank as ocean
Grows blank at noon–
No boat but a coffin,
And horizon for a coast.