Shahr-e-jaanaan: The City of the Beloved

Winner of the Kundiman Poetry Prize

Shahr-e-jaanaan sets out to recreate the universe of Urdu and Persian poetic tradition. As the speaker maps her romances onto legends, directing their characters perform her own tragedy, their fantastical metaphors easily lend themselves to her fluctuating mental state. Cycling between delirious grandeur and wretched despair, she is torn between two selves— the pitiable lover continually rejected, and the cruel, unattainable beloved comparable in her exaltation to a god.

“Talukder’s poetry immediately transported me to an elsewhere both otherworldly and viscerally recognizable… one cannot enter this collection unchanged.” — Siham Karami, writing in Poetry International

“I stayed in a perpetual state of goosebumps while reading Adeeba Talukder’s debut collection, Shahr-e-jaanan, no lie. Maybe because the settings evoked are familiar and tangible but also magical, otherworldly. Maybe it’s that I fell, despite myself, captive to the spells of its stories—Scheherezade and her command over wild nights of imagination come to mind. Maybe it’s the way Talukder manages to both evoke Urdu poetic tradition and create her own—these poems swoon with the restrained sensuality of the old world while dancing with the glittering passions of the new. Let yourself get caught up in this book’s wondrous whorls and whirls—you won’t regret it.”

—Tarfia Faizullah, author of Registers of Illuminated Villages and Seam

“When I have questions about… how to write poems that ask after the divine, I find myself returning to Shahr-e-jaanaan: The City of the Beloved by Adeeba Shahid Talukder.”

“The only way for any literature to grow is to be in conversation with other traditions, other voices. Where would the intricate and deeply moving tradition of English sonnets be without Sir Thomas Wyatt and Henry Howard’s bringing it from Italy in the 16th century? Or, more recently, where would we be without Agha Shahid Ali’s passionate pursuit of ghazal in English, expanding American tradition in ways that no one could have predicted. Adeeba Shahid Talukder enters this conversation between traditions with elegance and insight. Herein we discover Urdu poetics of giants as different as Mirza Ghalib and Faiz Ahmed Faiz, gently brought into English by Talukder’s own hand. Opening this book in the middle— starting with short lyrics such as ‘The Scaffold’s Branch’ and ‘Exotica’— I was immediately taken with their elegance of striking yet tender tonal shifts. Then, I dove into the the longer poem, ‘On Beauty,’ marveling at its integrities of the unsaid, its singing, its questions. This is one of those books that truly teaches us how to read it. After everything we thought we knew about the moon, herein is a chance to see it with new eyes. After everything we thought we knew about ourselves, and our loss, there is more to find: ‘When the color left / my cheeks,’ the poet writes, ‘You / left too.’ This book is an exquisite lyrical feast.”

— Ilya Kaminsky, author of Deaf Republic and Dancing in Odessa

“Adeeba Talukder’s City of the Beloved hovers on the nexus of heartache and joy, a meeting of point of arrival and exodus, and where love is the revolving door to the world of the unknown. Recalling the concision and scintillating acumen of Emily Dickinson, Mirabai, Rabia and Sappho, and drawing on the masters of Urdu and Persian poetry, Talukder renders a full world of heart, soul, and body, profound and dauting, sensual and sacred, enchanting and redeemable. This is a beautiful, stunning and unforgettable book.”

“Beauty and urgency, lyricism and violence are carefully orchestrated into conversation. The beauty of these poems arises from their complexity, the infinite ways they bring together lyricism and urgency, femininity and violence, adornment and danger. ‘In this intricacy is power.’ This is a first book you will not soon forget.”

Shahr-e-jaanaan sets out to recreate the universe of Urdu and Persian poetic tradition, its tropes both lenses and mirrors for the speaker’s reality. As she maps her romances onto legends, directing their characters perform her own tragedy, their fantastical metaphors easily lend themselves to her fluctuating mental state. Cycling between delirious grandeur and wretched despair, she is torn between two selves— the pitiable lover continually rejected, and the cruel, unattainable beloved comparable in her exaltation to a god. Shahr-e-jaanaan explores, interrogates, and distorts these dichotomies and their symbolism, calling into question the forces that elevate some to divinity even as they damn others to injustice and oppression. 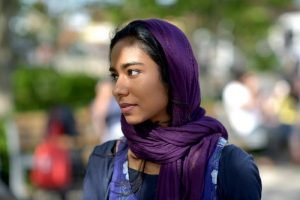 Adeeba Shahid Talukder is a Pakistani American poet, singer, and translator of Urdu and Persian poetry. She is the author of What Is Not Beautiful (Glass Poetry Press, 2018) and her book Shahr-e-jaanaan: The City of the Beloved, is a winner of the Kundiman Poetry Prize. Her poetry has appeared in Poem-A-Day, Gulf Coast, Meridian, The Margins, and elsewhere. A Best of the Net finalist and a Pushcart nominee, Adeeba holds an MFA in Creative Writing from the University of Michigan and is the recipient of an Emerging Poets Fellowship from Poets House.

When in the dark/ my mind brightened

I realized I could no longer
wait to be beautiful. Thus, I pushed
bangles upon bangles
onto my wrist, rubbing
my hands raw with metal
and glass.

Each time a bangle broke, I watched
the blood at my veins
with a grim face,
feeling more like a woman.

No symmetry or sequence.
All colors clanged upon my arms,
bright, jeweled, and dissonant.

That night, the window air was open,
the full moon luminous. I waited
for my mother to turn, to see me
as a bride.
.
I wanted to tell her:

The world is adorning itself
for my wedding.

That night, my mother looked
into my eyes with terror. That night,
she wouldn’t let me leave.

Kathak: The Dance of the Courtesans

i.
In the mirror, tilt
your chin
higher.
At the end of each
chakkar, return to your own
eyes.

Your breath, a spool of thread—
thin, sharp,
unravels. Pull, pull
it back in.

Shackle yourself until
your ankles
are gold;
hold your wrists
delicate
beneath your jewels.

Now dance; the city awaits you.

Goddess, beloved, flame, they say:
all beauty converges in you.
Men gather at saints’ tombs,
but rush to your doorstep
with greater madness.
Let them gaze at you

until you begin to tremble;
allow yourself to be slight-

ed. You, fragile
as glass, will learn:

In the final scene of the 1972 Hindi film Pakeezah, Meena Kumari’s love is getting married to someone else, and she is performing at the wedding. She shatters a lamp, then dances upon its shards, leaving crimson footprints all over the white sheets.
excerpt from title poem, Shahr-e-jaanaan: The City of the Beloved —

I smeared lipstick on
without a mirror,

spread my scarves across
the dirtied carpet,

smothered my palms
with lotion and talc
until they silvered

for I was wrathful.

My aunt pulled
Mina into the kitchen,

said, Now listen closely,
and promise me you’ll be strong:

your sister has gone mad.