Diurne is a procedural project, “a line each hour of waking / a poem each day of making,” that explores how poetry is durational rather than inspirational, work rather than epiphany.

Chaotically weaving witticisms, adages, and inquiries with metaphors and non sequiturs, the second book from Bagdanov (Fossils in the Making) attempts to embody the mystery and mayhem churning beneath the surface of everyday life. -Publishers Weekly

“Kristin George Bagdanov has a gift of being able to make lyrics from our daily moments; she finds depth where others only see surfaces; she finds mystery and sets that mystery to music. Her method is impersonal intimacy, she says. This is the intimacy of living with our 21st century vocabulary, our 21st century problems, our 21st century issues—and, yet, finding in all of that the music of waking thought. ‘I am on a verge of waking,’ she says, ‘I find an edge inside myself and push.’ This is an intricate, compelling, necessary work.” —Ilya Kaminsky, author of Deaf Republic and Dancing in Odessa

“Every morning the mind wakes up and reminds itself it is itself, and every night, tired of the endeavor, it lets itself forget. In between, in those waking hours, we think, or think we think, and it is in those skeptical, hypothetical, insecure, brazen, shallow, wonder-struck, wanting, worrying hours that Kristin George Bagdanov’s small book of poetry-philosophy works its necessary work. Her method—a line for every waking hour—lets us glimpse the ever-wounded mind who in its myriad cares knows everything but how to make sense of it all, how exactly to say ‘I.’ So it is she offers us a gift, as real poetry must, not of knowledge, but of learning ever more honestly to say ‘I don’t know’—& yet, so much is known, so much knows us. I want to say this book teaches me that we all wake every day into a Daedalean labyrinth, none of us think we have a thread, but we have the threads that are thoughts, thousands of them. They might not rescue us, but as George Bagdanov so beautifully knows, it isn’t rescue we want, but learning to be more mindfully lost.” —Dan Beachy-Quick, author of gentlessness and Of Silence and Song

“‘Many still set the aesthetic against the political,’ worries the text, refusing to do the same, also refusing to pretend the difficulty has been overcome. Instead it lies down with the difficulty and says, ‘I wait for a poem to wake me up,’ while generously offering poem after poem that does the trick and sets us leaping.” —Joshua Clover, poet and professor at the University of California Davis.

“Daily writing projects come as no surprise, and seldom offer any. The products of self-imposed and -regulated poetic labor often read like not much more than that: output. Diurne, which presents itself as the record of one poet’s ritual writing practice (“a line each hour of waking / a poem each day of making”), is among the great exceptions. Whip-smart, allusive, aphoristic, cheekily instructive (“Catered lunches humanize the workplace”), shot with lyricism, endlessly playful, intimate, anxious, and often laugh-out-loud funny, Diurne achieves with great grace and relative efficiency what the best examples of its subgenre have to offer: it limns a sense of consciousness through whatever’s at hand as it places the noteworthy on equal footing with the banal…What truly distinguishes Diurne is the affective force with which it undertakes its given task: “This is a poem written under duress,” the text professes, and there is never any doubt of it. Rooted in confusions of desire and of the work of being one among many; in questions of subjectivity, economy, and ecology (here at the “postpartum of the world finally giving up its human”), Diurne drags the reader through its divagations in such a fever that it should probably go home, relax, take the rest of the day off…from where I’m standing, it’s pretty much a masterpiece.” —Timothy Donnelly, final judge for the Sunken Garden Poetry Prize

Diurne is a procedural project, “a line each hour of waking / a poem each day of making,” that explores how poetry is durational rather than inspirational, work rather than epiphany.  It is part autobiography, part journalism, part theory, and part apology for not being traditional “poetry.”

“Whip-smart, allusive, aphoristic, cheekily instructive…shot with lyricism, endlessly playful, intimate, anxious, and often laugh-out-loud funny, Diurne achieves with great grace and relative efficiency what the best examples of its subgenre have to offer: it limns a sense of consciousness through whatever’s at hand as it places the noteworthy on equal footing with the banal.” –Timothy Donnelly 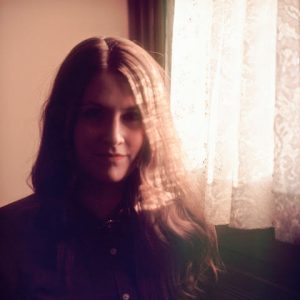 Kristin George Bagdanov earned her M.F.A. in poetry from Colorado State University and is currently a Ph.D. candidate in English Literature at U.C. Davis. Her poems have recently appeared in Boston Review, Colorado Review, Denver Quarterly, Puerto Del Sol, and other journals. Her first full-length collection of poetry, Fossils in the Making, was published in April 2019 by Black Ocean. She is the poetry editor of Ruminate Magazine. More at kristingeorgebagdanov.com or @KristinGeorgeB.

Acknowledgements: Poems 3 & 4 of Diurne were first published in Omniverse.

My body refuses to learn its edges

I haven’t written about my mother for a while. Maybe I solved it. Maybe
this poem is my mother.

I’m not sure which crisis this poem is responding to

Not everyone will use the OED to read your poem

We’ve all written a poem about murmuration

I’m not making anything new here

An accrual poem
In 2015, 55% of Americans who accrued vacation didn’t use all of it. A
lot of people like to hoard their vacation days so that when they leave
then job they can “cash out” and give themselves a little bonus for never
missing work. Corporations prefer to call vacation days “Paid Time Off ”
so that you forget that vacation is the opposite of working. Vacation, as
in, vacate: to be empty, free, etc.

My mother is a fish, said someone