Everyone Coming Toward You

These poems speak with a breezy candor and wit—reminiscent of Campbell McGrath’s own narrative work. The language is warm and highly accessible, the themes inviting (working for a Long Island escort service, having the great Jackson Pollock reach into his baby crib), and the stories are compelling. These are stories the guy sitting on the next bar stool might tell you, if the guy had a poet’s gift for language.

The March – April, 2006 issue of the American Book Review reviews David Petruzelli’s Everyone Coming Toward You.

Everyone Coming Toward You (Tupelo Press, 2005) author David Petruzelli gives a fabulous interview at Mipoesias.

Poet Jenni Russell posted an enthusiastic review of Everyone Coming Toward You on her July 12th chanticleer blog (http://jenniandjack.blogspot.com).

Joanna Pearson reviewed Everyone Coming Toward You for Small Spiral Notebook.

These poems speak with a breezy candor and wit—reminiscent of Campbell McGrath’s own narrative work. The language is warm and highly accessible, the themes inviting (working for a Long Island escort service, having the great Jackson Pollock reach into his baby crib), and the stories are compelling. These are stories the guy sitting on the next bar stool might tell you, if the guy had a poet’s gift for language. 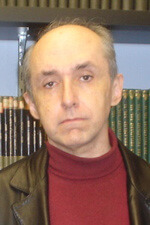 David Petruzelli grew up in New Jersey, and for more than twenty years worked as a writer and appraiser for auction houses in the US and Switzerland. His poetry has appeared in The New Yorker, Gettysburg Review, Partisan Review, and elsewhere. He lives in New York City.

but the unaccustomed dark
helped us bow our heads;
the classroom lights were welcome.
I think we grew quiet then

and began to concentrate,
as though this was September
and we would behave.

But the sound outside continued.
It was something we had to hear again.

Father Listens to the Artists

When I was eight months old, Jackson Pollock
stuck his hand in my crib and let me squeeze
one of his fingers. He was in my parents’ kitchen
in Hoboken, where we lived for three years;
he said the new linoleum reminded him
of one of his paintings. Every time my mother
tells the story, she always adds, “this is true”;
but my mother can’t tell stories.
And my father has stopped remembering.
What never changes is my hand touching Pollock’s
and who was watching; my parents and my father’s
best friend from childhood—Nick Carone,
a painter who had brought along his famous pal
partly to show off, partly in the hope
Pollock would notice that the work my parents
loyally hung in our living room was Nick’s.
But all Pollock cared about, my mother says,
was how much beer was left, how much money
Nick could con my father into giving them,
until the bottles on the table clinked happily
and the artists looked at each other
like lovers who had forgotten our world.
Then Nick placed his hands on my father’s shoulders,
Pollock called over to my mother,
who had gone to my crib. Without looking up
she broke her train of baby talk to say goodbye,
but watched my father follow them out
into the hall and stand at the top of the stairs,
waiting as both men began the long walk down.
It’s at this point my mother always stops to ask,
Do I remember we lived on the fifth floor?
And by now I’ve learned to answer, yes I do.

Maybe it’s easier to buy new clothes
rather than wash the old,

to let her boyfriend entertain himself
while she dozes on the couch all afternoon,

and now he wanders through each room,
pausing to view the cartons of old take-outs

and retrieve her underwear — all yellows
and pale blues — folding them, starting to remember.

and now, it seems, of his, if only
for the black & white photos of young girls

or the endpapers marbled by hand in Paris,
and which he touches now

as if nothing found on her floor could compare.
But at five he says, “I’ll call you later,”

as coming from the hall; her eyes closing
forgo the door’s rough kiss. She touches her face,

remembers the feel of his hand,
and that earlier she said please come over;

that she had really said please;
that he brushed one cheek as if checking for dust.