Featuring “Good Bones,” which has made a difference to so many people around the globe—called “Official Poem of 2016” by Public Radio International

These poems stare down darkness while cultivating and sustaining possibility and addressing a larger world.

“How does one poem speak to so many people at once? I wonder. I’m tempted to call Maggie Smith a soothsayer, someone who heard the future’s sad, exasperated call a few months early so she wrote: ‘For every bird there is a stone thrown at a bird. / For every loved child, a child broken, bagged, / sunk in a lake.’ We think we know that stone better now, from our new vantage outside the orchard. We think we know that lake better, too, but the truth is, they’ve always been here, these stones and lakes. If anything, perhaps we see them clearer now. Perhaps we’re more aware than ever before of their multivalence, the many ways that elemental things like stones and lakes can mean.” — Julie Marie Wade, The Rumpus

“While the now-famous poem lends its name to Smith’s third poetry collection, and remains one of the book’s highlights, readers will find a far greater bounty within. Informed by the sacrifice, trepidation, and awe of early motherhood—’a spell/that is only now beginning to break’—Good Bones presents a rollicking array of lyrics, myths, and meditations. Notable for their heart, understatement, and deceptive accessibility, Smith’s poems yearn to reconcile how a world of wonders can remain a world of thorns.” — Adam Tavel, Plume

“The title poem of Good Bones went viral this year because its central theme — wanting to believe in the goodness of the world for the sake of one’s children — connected with so many people. The other pieces in this collection, Smith’s third, provide a fuller understanding of the complexities faced by the speaker, who tries to teach everything a child needs for survival, while admitting, ‘What can I say but stay/ alive? You’re new, and there’s too much to learn.’ No matter the style or subject, the writing remains honest, compassionate and graceful, and the speaker maintains her determination to ‘love the world like a mother.'” — Elizabeth Lund, Washington Post, “The Best Poetry of 2017“

“The truth of these poems flies out of the honesty and realness of Smith’s experiences, her language richly accurate, deep and yet readable as if it were our own thoughts written down, brimming with feeling, and attuned through imagination’s watery grasp.” — Z.G. Tomaszewski, Michigan Quarterly Review

“In this collection titled for a poem that became an unlikely viral sensation, Smith follows The Well Speaks of Its Own Poison by exploring the sensorium mothers and children share in a place where ‘deer still find their way to the backyard.’ Suburban as it may be, strangeness and terror manifest in this setting, while surreal sound and color imbue the ordinary with surprising affect, as in the ‘glitter-black overlap of shingles’ or ‘lit/ windows painting yellow Rothkos on the water.’ The collection features many meditations—on past and future, life and death—but the ones that stand out revolve around motherhood, particularly the magic and trauma of motherhood and motherlessness. Smith considers, from a personal perspective, the violence of Caesarean section (‘Twice/ they cut babies from my body’) and miscarriage (‘you who have me/ in common—not-mother, mother// you weren’t to have’). She elevates motherhood to something akin to an aesthetic or theology. ‘The mother is glass through which/ you see, in excruciating detail, yourself,’ she writes. For mothers and non-mothers alike, Smith shares one possible orientation to the world whose rottenness she catalogues along with all that makes it, in her view, still worth loving: ‘Let me love the world like a mother./ Let me be tender when it lets me down.’” — Publishers Weekly

“Come for Smith’s viral title poem, but stay for her range as she builds a notable collection, one suffused with grace, and—dare I say it—hope. ” — Nick Ripatrazone, The Millions, “Must Read Poetry: October 2017“

“As if lost in the soft, bewitching world of fairy tale, Maggie Smith conceives and brings forth this metaphysical Baedeker, a guidebook for mother and child to lead each other into a hopeful present. Smith’s poems affirm the virtues of humanity: compassion, empathy, and the ability to comfort one another when darkness falls. ‘There is a light,’ she tells us, ‘and the light is good.’” —D. A. Powell

“Smith’s voice is clear and unmistakable as she unravels the universe, pulls at a loose thread and lets the whole thing tumble around us, sometimes beautiful, sometimes achingly hard. Truthful, tender, and unafraid of the dark, the poems in Good Bones are lyrically charged love letters to a world in desperate need of her generous eye.” —Ada Limón

“In her wondrous new poetry collection, Maggie Smith has much to tell us. And she does so with such a clean, aching clarity of lyricism that I freshly discover with real surprise now frequently exhausted human touchstones. It’s Smith’s dynamically precise and vivid images, and her uncanny ability to find just the right word or action to crack open our known experience, that make Good Bones an extraordinary book. Maggie Smith demonstrates what happens when an abundance of heart and intelligence meets the hands of a master craftsperson.” —Erin Belieu

Featuring “Good Bones,” which has made a difference to so many people around the globe—called “Official Poem of 2016” by Public Radio International

Maggie Smith writes out of the experience of motherhood, inspired by watching her own children read the world like a book they’ve just opened, knowing nothing of the characters or plot. These poems stare down darkness while cultivating and sustaining possibility and addressing a larger world.

Maggie Smith’s previous books are The Well Speaks of Its Own Poison (Tupelo 2015), Lamp of the Body (Red Hen 2005), and three prizewinning chapbooks. Smith is the recipient of fellowships from the National Endowment for the Arts, the Ohio Arts Council, and the Sustainable Arts Foundation, among others.

Her poem “Good Bones” has gone viral—tweeted and translated across the world, featured on the TV drama Madam Secretary, and called the “Official Poem of 2016” by Public Radio International, earning news coverage in the Washington Post, Slate, the Guardian, and beyond. Maggie Smith was named the 2016 Ohio Poet of the Year.

A child of, say, six knows you’re not the shape
she’s learned to make by drawing half along a fold,
cutting, then opening. Where do you open?
Where do you carry your dead? There’s no locket
for that—hinged, hanging on a chain that greens
your throat. And the dead inside you, don’t you
hear them breathing? You must have a hole
they can press their gray lips to. If you open—
when you open—will we find them folded inside?
In what shape? I mean what cut shape is made
whole by opening? I mean besides the heart. 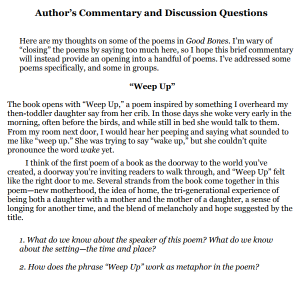