Invitation to a Secret Feast

Haddad’s passionate, poetic voice is renowned throughout Europe and the Middle East, and Tupelo is very proud to be the first to publish her work in this country.

P.J. Gallo reviews Invitation to a Secret Feast for the online journal coldfront.

Invitation to a Secret Feast is the 5th book of poetry by noted Lebanese poet Joumana Haddad, edited and with an introduction by Khaled Mattawa (who also did some of the translations). Haddad’s passionate, poetic voice is renowned throughout Europe and the Middle East, and Tupelo is very proud to be the first to publish her work in this country.

In these gorgeous translations, her voice sings, celebrating sexuality, femininity and womanhood.

About the Translators:
This volume includes the works of several translators, whose names are indicated by their initials at the bottom of each poem. The translators who contributed to this volume are:
Najib Awad (ND) • Issa Boullata (IB) • Marilyn Hacker (MH) Joumana Haddad (JH) • Khaled Mattawa (KM) • David Matthews (DM) 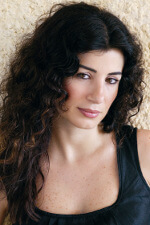 Joumana Haddad was born in 1970 in Beirut, Lebanon, where she lives and works. A poet, journalist and translator, she is editor of the cultural pages of the Lebanese daily An-Nahar, and Administrator of the Arab Booker Prize. She has published five collections of poetry, including Daawa il Ashaa Sirri (Invitation to A Secret Dinner) and Aawdat Lilith (Lilith’s Return). Her books have been translated into French, German, Spanish, and Italian. Speaking seven languages, she has translated several works of poetry and prose into and from Arabic. Her most recent is an anthology of modern Lebanese poetry translated into Spanish and published in Spain and in various Latin American countries.

I don’t remember
that I undressed in daylight
for a man
whose eyes are closed.

I don’t remember, don’t remember
that I conquered a man like a storm
and he was the open windows that faced my weakness,
that I pounced on him like a fever
and his hallucinations swallowed my tongue.

I knew men’s bodies as travel
and my body as arrival and easy farewell.

I knew that men’s hearts are pairs of hands,
and knew my heart was a promise of asphyxiation
that remains false even when it wins.

I knew that men’s arrival was a gentle flood
and their departure a temporary ruin.
I knew how to forget them even as they stormed the dust of memory.

I had never known a man
whose heart professed rupture like a foretold catastrophe.

I never knew a man
who could turn me
from an Eve into woman.

My mouth will slide from your forehead to your neck
from your neck to that most significant crux.
I will unload my dreams on your shoulders
and you will let me wander.
Come along.

You barge into my head
and I veil myself with fantasy and chase you.
Come, I won’t call out to you again.
Come, cling to me
and don’t waste my dizzy madness.
Beware not to let my fragrance linger.
Don’t let it remain behind
once I am gone!