Written in the aftermath of his father’s death, Mark Halliday proves to be one of America’s most intimate poets. Like Frank O’Hara and Kenneth Koch, Halliday’s poems chat with the reader in earnest yet humorous ways and in wholly believable voices. Whether exploring grief or desire or loneliness, these poems never forget the human longing for permanence.

In this, his fifth book of poems, written in the aftermath of his father’s death, Mark Halliday proves to be one of America’s most intimate poets. Like Frank O’Hara and Kenneth Koch, Halliday’s poems chat with the reader in earnest yet humorous ways and in wholly believable voices. Whether exploring grief or desire or loneliness, these poems never forget the human longing for permanence.

“He is prolix and quotidian, a Whitman in a supermarket, a confessional poet who does not take himself very seriously? His cool patter skewers pomposity…”—The New Yorker 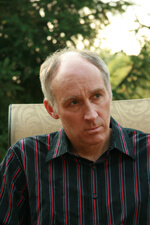 Mark Halliday was born in Ann Arbor, MI and grew up in Raleigh, NC and Westport, CT. He earned a BA at Brown University in 1971, an MA in creative writing at Brown, and a Ph.D. in English at Brandeis University. He has taught at Wellesley College, the University of Pennsylvania, Wilmington Friends School, Indiana University, Western Michigan University, and Ohio University, where he has been since 1996.

Twenty days after my father died I threw away
all the letters between him and Sally Pierce
written in the mid-Thirties—
all that yearning and uncertainty, admiration and doubt—
the love of Milt and Sally;
she was the one he didn’t marry
and in sixty-some further years he didn’t forget…
Sally died young. Milt died very old.
Twenty days later I swam down into the files

So I chucked the Sally letters, unread,
because I was not God.
God would be the Omnivorous Reader.
God might not see the little sparrow’s fall
but if the sparrow or its mate wrote an account of it—
My Lamentable Fall From the Sky—
God would read every page;
Our Lord would savor every sentence.
And never put it back on the shelf!

My father was quite sure God didn’t exist
and for most of his life he felt sure this was
a good thing, or at least extremely acceptable.
In his last two years I think he felt more
a sad irritation or that God’s nonexistence is (as he would say)
a hell of a note.

Not being God, I tossed the entire yellowed bundle
and a wraith, or invisible powder of old paper,
rose from the black bag to watch me
from the ceiling of the littered posthumous apartment.
Surely the wraith could see my predicament.
Not being God, I had to be Nature.

Milt was confused by too many desires,
and more romantic than he knew.
Sally was more cautious than her flamboyance implied,
and less romantic than she believed.
Milt and Sally— like their friends,
a bit overcomplicated for this green and blooded world,
but a damned good read.

Some people just seem to exist, as opposed to live,
in a foggy drift. I am so glad that’s not me!

I am certainly so glad I have such thumping
zest for life. The way I dig into life
like a bowl of hot Texas chili with sour cream
and shredded sharp cheddar— I’m so glad

and so for example when I see young couples
groobling moistly at each other’s burger-fed gamoofs
I certainly don’t waste my time with any type of envy,
I’m just like Yeah you kids go for it!—
Meanwhile I am going to listen to Let It Bleed LOUD
and totally rock out with all my teeth bared!
I figure I am at least as alive as Little Richard was in 1958
and it’s such a kick!

Does it get tiring?
Well, sure, occasionally,
but who cares? I embrace the fatigue,
I KISS it till it flips and becomes defiantly voracious vim
and when I read that line in Wallace Stevens
“being part is an exertion that declines”
I’m like What in heck is that old guy talking about?

DORIE OFF TO ATLANTA

Jen? Hi, it’s Dorie. I’m on the bus to La Guardia. … Atlanta.
What? … Maybe. I’m not really sure. I mean his schedule is so whacked,
y’know? … But anyway, I was telling you about Marcie. Yeah. So
I said to her, I said Marcie, this one seems different, y’know?
I said the last few guys you’ve dated— from what you’ve told me—
I mean frankly—… Yeah. I said Marcie, they might be
like very charming, y’know, and with great jobs, but frankly—
what it comes down to is Let’s hit the bed,
and in the morning Thanks for the excellent coffee. Y’know?
But this guy—… What? It’s Jason. Yeah.
So I said Marcie, from what you’ve said, Jason sounds different—
and from what Bob said about him also. … Bob knows him
from some project last fall. So I said Marcie, you’ve had, what,
two coffees, two lunches and a dinner and he still hasn’t—…
No, Bob says he’s definitely straight. …
I think there was a divorce like six years ago or something. But my—
What? … That’s right, yeah, I did. At Nathan’s party after some show.
. . . Yeah, “The Duchess of Malfi,” I forgot I told you. What? …
Only for five minutes— one cigarette, y’know? … Kind of low-key,
like thoughtful. But my point is— … Yeah, exactly! So I said
Marcie, this is a guy who understands, y’know,
that bed is like part of something, y’know?
Like it’s not the big objective for godsake. It’s like an aspect—
What? … Exactly— it’s an expression of something much more—
yes!— it’s like Can we be companions in life, y’know?
So I said Marcie, for godsake—if you don’t give this guy
like a serious chance, somebody else—y’know? . . . Right,
I mean let’s face it— not that I… What? Yeah, it’s like reality is
what actually happens! … Jen?
I’m losing you here— am I breaking up?
Jen, I’ll call you from the airport— Okay bye.