“In poem after poem of this solid collection, Nezhukumatathil does what Marianne Moore suggests poetry ought to do, place readers in ‘imaginary gardens with real toads in them’—as such she guides us through the imaginary realm, ‘with all its rawness,’ of the poet’s world attuned to our senses.” – Newpages

Also available in ebook through Amazon, Barnes and Noble, iTunes and Kobo.

Very few poets have a world within a collection, perhaps because the point of view is not always so absolute. Nezhukumatathil, however, flattens that paper asterisk globe and plays with the ends until she pushes together whichever parts she wants. That is her gift; she brings her worlds together and creates a new one. It is a kind of magical realism, in which magic and reality are strung together and carefully cultivated into something new.

Not only does each poem possess a fierce insight at its core, but they also reveal the sheen and wink of each facet that makes up their subjects. The poems shift from the microscopic to the macro and back again with just a flicker; they marvel at the spectral color of both the individual cell and the entire forest[.]

The tone of these lines is that of a subtle storyteller who we want to believe in spite of the fantastic nature of the narrative. Her skill in depicting exact detail helps readers dive into her imagined world without qualms; delicate lyrical lines such as “[l]ight water on the walls of an already warm glass” and the repetition in “[t]here is the sink and the soap but nothing to scrub… / [t]here is the sink, the violet eye, the squawk, the fright” helps readers navigate the subtle tonal register of the tale. We might forget ourselves in this poem; this is one of the great joys of reading Lucky Fish.

In poem after poem of this solid collection, Nezhukumatathil does what Marianne Moore suggests poetry ought to do, place readers in ‘imaginary gardens with real toads in them’—as such she guides us through the imaginary realm, ‘with all its rawness,’ of the poet’s world attuned to our senses.

Aimee Nezhukumatathil’s third book, recently released by Tupelo Press (which also published Miracle Fruit andAt the Drive-In Volcano) affirms her reputation as one of the master miners of the curios fact in science, history, nature and culture. With unparalleled ease, she’s able to weave each intriguing detail into a nuanced, thought-provoking poem that also reads like a startling modern-day fable.

The online journal Pirene’s Fountain features a showcase on Aimee as well as an interview with her:

I have always felt a pull and push to record the landscape, first starting as a way of remembrance, I think. My family moved five times before I started high school and it was my way of remembering the smell of creosote shrubs in Phoenix, catalpa seeds and wide skies in Kansas, fruit and veggie stands and showy maple displays of Western New York. And then I had the same impulse to record and try to make sense of my travels to India and Philippines, lands where my parents are from and where I feel both strangely at home and yet very much a stranger.

There’s a symmetry, I think, to the sections with Nezhukumatathil’s wonderment of the world, even down to such tiny levels as thorough examinations of something like red dye, on one side of her personal poems, and then the motherhood inspired poems on the other side of her more personal poems.

Lucky Fish travels along a lush current — a confluence of leaping vocabulary and startling formal variety, with upwelling gratitude at its source: for love, motherhood, “new hope,” and the fluid and rich possibilities of words themselves. With an exuberant appetite for “my morning song, my scurry-step, my dew,” anchored in complicated human situations, this astounding young poet’s third collection of poems is her strongest yet.

Nezhukumatathil’s third book is fascinated with the small mechanisms of being, whether natural, personal, or imagined. Everything from eating eels in the Ozark mountains to the history of red dye finds a rich life in her poems. At times her lush settings and small stories are reminiscent of fairy tales, while at others Nezhukumatathil speaks with resonance and fierceness. Even as the poems jump from the Philippines to India to New York, they still take their time, stopping to notice that ’there is no mystery on water/ greater than the absence of rust,’ and to draw small but wonderful parallels.

A farmer is devoured by a flower in one of the many beguiling poems of Lucky Fish. This is the sensation I often had reading Aimee Nezhukumatathil’s wonderful new collection—that of being immersed in a limber intelligence. Rooted in the terrains of culture, place, and parenthood, and buoyed by inventive language that is joyous and sincere, Lucky Fish is a book of copious heart and imagination. How wonderful to watch a writer who was already among the best young poets get even better!

Aimee Nezhukumatathil’s latest collection of fanciful and carefully wrought poems are once again far-reaching in geographic scope and linguistic imagination. Here is a poet willing to praise the earth, the animals, the ’mud and its confusion,’ as well as the human ’sleep-sloppy mouths.’ These are sensual dreamscapes of allegory and fable, but with a righteous bite and the razor sting of perception, Lucky Fish is alive with the poet writing well and passionately in a world she cares deeply about.

The sense of wonder in Aimee Nezhukumatathil’s poetry has the quality of a cool breeze on a hot day. These poems convey affection for and passionate involvement with the world. ’I want to always know the brightness/of a gumball,’ she writes, and I believe her, believe she wants and is capable of such luster, such innocence. 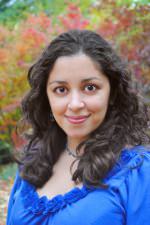 Aimee Nezhukumatathil is the author of Lucky Fish (2011). Her previous books are At the Drive-In Volcano (2007), winner of the Balcones Prize, and Miracle Fruit (2003), winner of the Tupelo Press Prize, the ForeWord Magazine Book of the Year Award in poetry, and the Global Filipino Award. Her poetry and essays have been widely anthologized and have appeared inPrairie Schooner, Black Warrior Review, FIELD, Mid-American Review, and Tin House.

ARE ALL THE BREAK-UPS IN YOUR POEMS REAL?

If by real you mean as real as a shark tooth stuck
in your heel, the wetness of a finished lollipop stick,
the surprise of a thumbtack in your purse—
then Yes, every last page is true, every nuance,
bit, and bite. Wait. I have made them up—all of them—
and when I say I am married, it means I married
all of them, a whole neighborhood of past loves.
Can you imagine the number of bouquets, how many
slices of cake? Even now, my husbands plan a great meal
for us—one chops up some parsley, one stirs a bubbling pot
on the stove. One changes the baby, and one sleeps
in a fat chair. One flips through the newspaper, another
whistles while he shaves in the shower, and every single
one of them wonders what time I am coming home.

She’s been warned not to sleep with moonlight
on her face or she will be taken from her house.

She wears eel-skin to protect herself. She tilts
her face to the night sky when no one is looking.
During the eclipse, eels bubble in their dark

and secret caves. Toads frenzy in pastures
just outside of town, surrounding the dumb cows

in a wet mess of croak and sizzle. Years later,
she would touch the hand of a green-eyed man
by the weird light. Because of him, she plants

a moon garden: freesia, snowdrops, fotherfilla,
bugbane. She is a runner-bean, stretching best

and brilliant in this light. Their child is moon-faced.
She is crazy about them. She is lunatic. She
is taken. She is a hymn book flipped open. 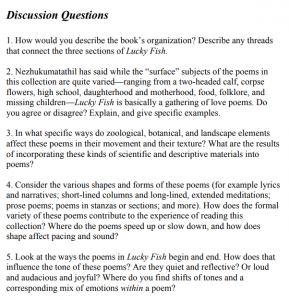