“In Manoleria, the body, broken apart ‘in elegant stress,’ recongregates. Formally, the poet is taking us through the emotional work of picking up pieces. Despite the splintering, despite the hemorrhage, somehow ‘all is accounted for.’ A cardinal debut.…” – D.A. Powell

“The passive reception of torture in these poems presents an obvious and effective symbol for the dire effects of American mob mentality and its political/economic system on everyday people. These impossible situations also unify a collection otherwise driven more by music and lyrical leaps.”— Andrew McFadyen-Ketchum, Kenyon Review Online

“He tackles the natural world and its forthcoming disintegration with a striking physically ill narrator, who leads his readers through wild and potentially destructive surroundings. His protagonist—distinctly masculine with eerily feminine echoes—struggles with babies, tails, rot and decay emanating from his sickly frame. The environment revolts and attacks our speaker with hysterical call girls, eroding sands, and torn limbs—both of the body and of the surrounding trees.” —Megan Fishmann, Algonquin Books Blog

“Our personal decisions, despite what political discourse, or American values may try to teach us, inherently affect the communities we are a part of. Again and again in Manoleria, we encounter personal agonies made public, emotional agonies made physical; the speaker resigned to a punishment meted out by a community, often as seemingly routine entertainment [.]” — Adam Fell, H_NGM_N

“Daniel Khalastchi’s first prize-winning book, Manoleria, might best be approached through a combination of folkloristic motif and Kafka, especially The Prisoner. The beauty of the book is that there is nothing, really, specifically political about it, and yet, like Kafka, it is entirely political. In contrast to Fabu’s Journey, there is likewise no specific setting or period. No specific reality, even, except the narrative I, which is not the author, not anyone, not even, much of the time, recognizably human—except in the fact of the identity’s continued use of, and enunciation through, language. And yet, in the cheery attempt to adapt to and cooperate with every horror that occurs in the confined landscape of his own constantly changing, tortured, suffering body, he is Everyman.” —Wendy Vardaman, Verse Wisconsin

“The poems in this magnificent volume ask us to consider the nature of selfhood when the body becomes unrecognizable, a concern that is skillfully enacted in the style of the work as Khalastchi appropriates, revises, and dismantles received literary forms.” — Kristina Marie Darling, Colorado Review

Winner of the Tupelo Press / Crazyhorse First Book Prize
Under the influence of broadcasts such as public radio’s “Marketplace” (a daily roundup of stock reports and business news), Daniel Khalastchi composed a series of character-driven poems whose recurrent narrator is physically and mentally manipulated while the world around him takes little notice. Through their chaos and horror, these poems ask a reader to question the ways in which our careening healthcare system, crumbling financial/housing/job markets, and war on multiple fronts are actually affecting us — both inside and out.

“In Manoleria, the body, broken apart ‘in elegant stress,’ recongregates. Formally, the poet is taking us through the emotional work of picking up pieces. Despite the splintering, despite the hemorrhage, somehow ‘all is accounted for.’ A cardinal debut.…”—D. A. Powell

“With composure so unflinching as to be unnerving, the speaker of this mysterious, deft collection explicates what would be, in other hands, unimaginable and unspeakable atrocity.… Khalastchi uses a steady, steady hand to reach into the quiver.”—Robyn Schiff

“Part nightmare journal, part survivor’s narrative, this haunting volume recounts one soul’s journey through the selva oscura within.… [A] music emerges that bears ultimate promise, for ‘somewhere inside I hear calling a shepherd.’”—Srikanth Reddy

“Uncertain as to whether they are buried or planted, growing or dead, the poems in Manoleria know when they are pushed up out of the dirt by some unholy hand what they can claim is a world punctuated by gasps, loneliness, and shadows that may be nothing more than wreckage. These poems remind me of Beckett’s Lucky (slave, clown, stranger, preacher); they are as terrifying and beautiful. Like Lucky they bring with them an indecipherable hope. Like Lucky they know to be fully alive means to embrace the soft panic only language can bring.”—Sabrina Orah Mark

Born and raised in Iowa, Daniel Khalastchi is a first-generation Iraqi Jewish American. A graduate of the Iowa Writers’ Workshop and a recent fellow at the Fine Arts Work Center in Provincetown, he is currently the Assistant Director of the Undergraduate Certificate in Writing Program at the University of Iowa. He lives in Iowa City and is a co-founder and editor of Rescue Press. 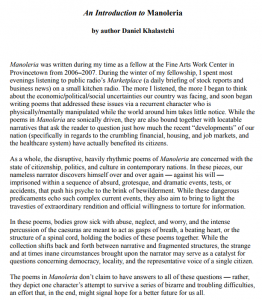