In 2007, the Tupelo Press Poetry Project was established to provide poets and creative writing teachers with engaging, challenging prompts or provocations for writing new poems. 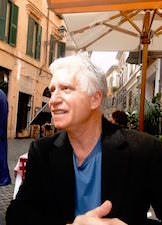 Jeffrey Levine is the editor-in-chief and publisher of Tupelo Press and author of two prize-winning books of poems, Rumor of Cortez and Mortal, Everlasting.

Marie Gauthier, Director of Sales & Marketing of Tupelo Press, is the author of a chapbook, Hunger All Inside (Finishing Line Press, 2009). Recent poems can be read or are forthcoming in The Common, Cave Wall, Salamander, Poetry Northwest, and elsewhere. She won a 2008 Dorothy Sargent Rosenberg Poetry Prize in addition to Honorable Mention in 2010.

“Dialogue with Gaps”
by Jeneva Stone

These meadows themselves open, brush the horizon

Some meadows flayed by wind, pinned by trees

what he says
don’t
the matter was her

These trees in these meadows green at the tips

That grass coarse against which some lay back

A meadow, distant now, each line of grass arrayed against another

her green fingers reach
he rides
she reaches further
he rides

Jeneva Stone’s poems and nonfiction have appeared in Beloit Poetry Journal, Colorado Review, The Collagist, RHINO, and many others. She is the recipient of 2012 fellowships from the MacDowell and Millay Colonies for her memoir about her disabled son’s undiagnosed illness. She most hopes, though, you will respect her in the morning.

“O Honey, Won’t You Rock My World Up North”
by Aubrey Ryan

The snow will go for days, our road
keep trackless, and the lamplight
spill then stay. You’re gold
in wool and overalls; you’re a sight

to see: my man. One pear, one pound
of chestnuts in a paper bag, one kettle set
to burst. I’m smooth and round;
I’m a shallow bowl of oil: so sweet

for flame. Bring shovel, bring
salt and light a match to me—my bones
will melt. Honey, ring me
in garland: I’m a festival. Our home

is in the branches of jack pine. Our bedposts hum
like hives. Take this body. We’ll make a wet thaw come.

Aubrey Ryan’s work has appeared recently or is soon-to-be in Best New Poets 2011, Quarterly West, Booth, Squat Birth Journal and Cellpoems. Aubrey lives in Iowa with her husband and their son, who is the best muse of all.

A week of nonnegotiable fantasy, days
of unmovable image—in a locked room,

against a door, in front of the window.

I, of course, am wearing a skirt, stockings
holding onto my thighs. You look

and then look down. You think

what you think. There’s only this table
between us – a slight expanse

of wood and steel, file cabinets,

note-taking. You rely on me and I you, not to. But I’m undependable

with the right kind of pressure.

I look outside at the land you love
clearing its throat, preparation

for singing. We have an understanding.

A bridge arches over the river, river
rises to meet it, pigeons fly out

from the dark underneath, and starlings

rise and fall in parabolic sweeps, glissandos
drawn from architecture and math, music

Amy Dryansky’s first book, How I Got Lost So Close To Home, was published by Alice James Books and her second, Grass Whistle, is forthcoming from Salmon Poetry in 2013. She teaches at Hampshire College and writes about the territory of mother/poet at her blog, Pokey Mama.