“A searching not so much for the why of love as for the how—how we can love given what we know, what we’ve already lost.” —Carine Topal, poet

In a review in the Winter 2010 issue of Agni Online, Kate Northrup has observed, “In Narcissus, Cecilia Woloch has fashioned a gorgeous, rigid world. It is silvery, of course, and glittering. It is full, especially at first, of shifts and fractures resulting from the limits of the speaker’s fixed positions.” Read the full review.

Prose poems alternate with brief lyrics to describe a narrative arc of failed and renewed romantic love—a turning inward, turning outward again, and no turning back, even in the face of loss.

Like the narcissus flower—delicate petals that bloom from a poisonous bulb, a flower named for the Greek myth of the youth who falls in love with his own reflection—the poems offer a sense of both beauty and danger. The danger of love and of love’s beautiful illusions, and the beauty that’s revealed after those illusions have been stripped away and what remains is the shimmer beneath the shimmering reflection, some deeper shine. Here, the meadows bare themselves to the moon, the new beloved steps out of the shadows, one enters “into a new love as into a mirror,” and the mirror turns to rain.

“A searching not so much for the why of love as for the how—how we can love given what we know, what we’ve already lost.” —Carine Topal, poet 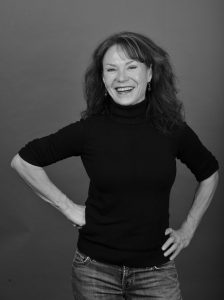 Cecilia Woloch is a poet, writer, teacher, and traveler based in Los Angeles but “on the road” across the US and Europe six months each year. She has published essays, reviews, fiction and six award-winning collections of poems—most recently Earth (Two Sylvias Press, 2015) and Carpathia (BOA Editions, 2009), in addition to NARCISSUS (Tupelo, 2008). Her honors include a Pushcart Prize, fellowships from the National Endowment for the Arts, the California Arts Council, Chateau de La Napoule Retreat for Artists, CEC/ArtsLink International and the Center for International Theatre Development. Maxine Kumin said of Cecilia Woloch’s work: “To write movingly about love in an era infused with hate requires a special gift: nostalgia hard-edged with realism. She has that gift.”

Didn’t I stand there once,
white-knuckled, gripping the just-lit taper,
swearing I’d never go back?
And hadn’t you kissed the rain from my mouth?
And weren’t we gentle and awed and afraid,
knowing we’d stepped from the room of desire
into the further room of love?
And wasn’t it sacred, the sweetness
we licked from each other’s hands?
And were we not lovely, then, were we not
as lovely as thunder, and damp grass, and flame?

POSTCARD WITH SARAH, TO SARAH, FROM A BRIDGE IN PARIS — WHICH?

It’s late and we’ve stopped to lean against the rail of the Pont Marie. Or the Pont Louis-Phillipe.  Or some other bridge — which bridge?  It’s cloudy; the moon is veiled.  Or it’s  clear, but we can’t see the Tour Eiffel.  Below us, on the quai, there’s a kind of party going on.  Someone’s about to fall into the river, or about to plunge, or he’s being pushed.  Or, no, it was only a game, after all.  See? — they’re laughing. A joke among friends.  My friend who leans beside me is saying she wants another child.  Now she’s sure of it.  A boy.  Or another girl like the girl she has.  Or different.  More like the father. Or darker, this time, like herself.  What does it matter?  Either one. Either one of us could be the other, sometimes.  In shadow, like this. She sighs. We both stare down at the glittering river knowing we’ll find no answers there.  We’ve agreed there’s no right or wrong, no answers at all when it comes to love.  And there are so many we might have loved, might yet love, or love again.  Her husband, she says, still recovering from the shock of her being his wife. I’m not winking, it’s just my eye.  And we’re falling down laughing.  We’re standing here. So beautiful, one of us says.  Or the other thinks.  The river, the wind.  It’s cold and our coats are thin.  It’s spring and the blossoms the trees breathe scatter like petals of snow at our feet.  It’s the middle of our lives and night and we walk toward everything.