The work of exile poet Phan Nhien Hao, although he is not permitted to publish in his native Vietnam, is exceptionally well known there. Swaying between poems of the immigrant experience and poems that recollect his homeland’s trauma after the war, his strong, sometimes surreal voice is always intoxicating. (dual language, English/Vietnamese)

An overwhelming sense of liminality pervades these poems: “I walk on bridges connecting two alien shores,” says the poet; “my country; which country, I asked.” Surrealism also suffuses Phan’s work, as does jazz: “all I love is jazz jazz jazz and lots of gasoline in my bloody abyss.” Phan draws from Vietnamese, French, and American literatures, mixing traditional and modern Vietnamese cultures with French literature, “imbued with philosophy, with lots of experimentations”: and American literature “suitable to a consumer society and a pragmatic culture, with that American emphasis on results” (as he told translator Linh Dinh in an interview included at the end of the book). Phan adds, “an investigation into American literature would greatly benefit Vietnamese writers. It would [. . .] improve their sense of humor.” All of these qualities are combined in Phan’s work, as glimpsed in the book’s title Night, Fish, and Charlie Parker—especially humor. Phan’s poetry is a distinctly American immigrant text, melancholy and celebratory at the same time. Read this book.

The work of exile poet Phan Nhien Hao, although he is not permitted to publish in his native Vietnam, is exceptionally well known there. Swaying between poems of the immigrant experience and poems that recollect his homeland’s trauma after the war, his strong, sometimes surreal voice is always intoxicating.

This is a dual language edition (Vietnamese and English). 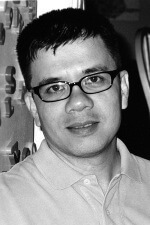 Phan Nhien Hao, born in Vietnam, immigrated to the US in 1991. He has a BA in Vietnamese Literature from The Teachers College of Saigon, a BA in American Literature from UCLA, and a Masters in Library Science from UCLA. He is the author of two collections of poems, Paradise of Paper Bells (1998) and Manufacturing Poetry 99-04 (2004). He currently lives in Los Angeles.

Night negotiation a plastic spoon
on a table littered with fish bones
all the illusions have been picked clean
Charlie Parker, a piece of bread not yet moldy
a black ocean and black notes
a few million years, a few small changes
at the bend in the road on the horizon
grows a strong type of tree
the black cat is in labor
gives birth to a few blue eggs.

The Sea and Vegetables

I keep the remembrances
returning each night
here’s something overly sharp
piercing the top of the head
to die many times in dreams
I sit up evening is already out there
water spinach drifts all over the ocean
common truths
erode the rocks year round
and I’m only wearing one shoe
to step on the scattered clam shells
the other foot hurting
my left eye sinks deep beneath the white foam
my right eye looks up at the sky
to see the seagulls
dance in the deep blue sky.

the brief long-distance phone conversation
interrupted by a civil war and coup d’états
in the middle of the square there’s a broken bench
where I sit holding flowers
then you are a tourist photographing
me among courteous people
arriving from afar.