In the introduction to O Woolly City, Priscilla Sneff’s debut collection, David Baker describes Sneff as “an old troubador poet brandishing the wand of a postmodern trickster, a mixer of syntax and matter, self-conscious song and wild ceremony.” This bold and mature first book inhabits a wide range of forms—from prose to villanelles and rhymes quatrains—while traversing a strange and intoxicating urban landscape. … Sneff’s poems speak in complex and playful voices rendered with such certainty that the reader deeply trusts the author and surrenders to her twists and turns of diction and direction.

“Riddles and puns, pastorals and lullabies. O Woolly City is an anthology of poetic types and rhetorical varieties, reminding me at times of the elliptical histories of Geoffrey Hill, the syntactic densities of Gerard Manley Hopkins, and enticing me with the barely revealed biographical details of her own curious speakers. As the poems proceed, and just out of focus, we see the shape, decay, and reformation of family and marriage, the (imagined?) birth of a daughter, even as we marvel at Sneff’s many forms of knowing and unknowing, her restless science. She assumes in turn the masks of zoologist and alchemist, mapmaker and wanderer, chemotherapist and mythologist.… This is the real thing, reader. Priscilla Sneff writes with the authority and commanding depth of second sight, haunted, experienced, and revisionary.” —David Baker, poetry editor, Kenyon Book Review 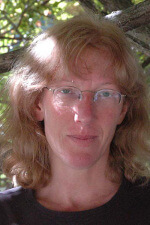 Priscilla Sneff has published poetry in the Yale Review, Sulfur, Ploughshares, The Partisan Review, Southern Review, and other magazines. She has received grants from the National Endowment of the Arts and the Massachusetts Cultural Council, was a George Bennett Fellow at Phillips Exeter Academy in New Hampshire, and was granted residencies at Yaddo and MacDowell Colonies. She teaches writing at Tufts University and lives in Cambridge, Massachusetts.

O Woolly City, each thing dings dully as an acorn
And nothing that’s glittery-clad, no sting, is found: swan-necked
Flasks (for don’t we all crave beauty and contamination)
Aren’t, and faetted gold’s drammed with the gorgeous salts underground
Where love’s brooklike dagger shivers.  Drat love’s daggery thirst.
And drat this woolliness: I promise you that there’ll be facts
But many other things are, City, necessary first
And a person’s in my pent house.  A person or a spook
Who flits from opaque to Opaque.  Away!  And segue
In ultima; say our knees hurt and our elbows and backs;
Say it’s growth phrasing its formal demands; say our bodies
As they each stand now, are the volumes of how, in the past,
They gave one graceful reply after the next….  Lover’s love,
Till the last word unproofed is, say, pretext: a romance of
Manner.  Say, Man or Ghost, more exactly: how difficult it is
To learn to speak our language fluently and correctly!