Orpheus on the Red Line

“Deppe’s scrupulous attention is tender, uncompromising, and full of a rare quality of moral weight. Witness has been raised to an art. Everything is at stake in these painstaking, loving observations.”—Mark Doty

The title drew my eye—I’ve always been a sucker for Greek mythology—but I didn’t read the book right away. It went into a stack by my favorite chair for a couple of months until one early morning I picked it up, intending to read just a little before getting down to my own writing. Soon I felt a prickle of excitement, hairs rising at the nape of the neck, and my morning plans went out the window.—Penelope Moffet, Rattle

For more than two decades a nurse in coronary care units and psychiatric hospitals, Theodore Deppe has also been an influential teacher of writing. His poems are genuinely and precisely dramatic as they embrace complicated human relationships in flux, with “compact lyrical narratives” (Eamon Grennan) that embody remarkable people in encounters with each other and their landscapes.

“Deppe’s scrupulous attention is tender, uncompromising, and full of a rare quality of moral weight. Witness has been raised to an art. Everything is at stake in these painstaking, loving observations.”—Mark Doty

And for Orpheus on the Red Line:

“Ted Deppe’s poems, which a reader might admire for their narrative gift and the beauty and force of their language alone, also look unflinchingly into the heart of human suffering while equally acknowledging the joy and peace that are possible in our lives. These poems, which chart Deppe’s peripatetic life in Ireland and the United States, trade the lack of a permanent home for an at-homeness in the moment…. Orpheus on the Red Line finds those improbable but real moments when we all can toast the peace and mystery of a ‘superabundance of being.’”—Robert Cording

“For that moment,” says Ted Deppe in the opening poem of his rich new collection, ‘it was the house of the world.’ He speaks of a pine tree, but the description might be applied with justice to his own poetry, for it is precisely this house of the world—the ordinary world lovingly seen—that he throws open for us, filling it moment by moment with luminous details. One comes away from these compact lyrical narratives with a sense that whatever the poet’s eye or mind has fallen on, been compelled to attention by, is somehow cared for, cherished, allowed to be its own full self.”—Eamon Grennan 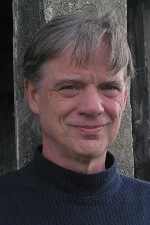 Ted Deppe was born in Minnesota, and grew up in Indiana. He worked for many years as a coronary-care and psychiatric nurse and has taught creative writing in high schools, universities, and graduate programs in the United States, England, and Ireland. His previous books include Children of the Air and The Wanderer King (Alice James, 1990 and 1996), and Cape Clear: New and Selected Poems (Salmon, 2003). He currently teaches in the Stonecoast M.F.A. Program and directs Stonecoast in Ireland, where he now lives with his wife, poet Annie Deppe.

almost skim the narrow road
before lifting
above hedgerows

then looping back past fresh-
mown fields, and I know
that movement—

from the car window
and let it ride and sculpt the wind—
know, and can’t name it.

We don’t live on this island now.
these days we’re
just summer visitors,

and since this could be our last time
to see friends,
we’re lingering

while the sea doubles the light
and the evening
keeps growing larger.

Marisol. Strange to have named this stunned tree
for a suicidal eight-year-old I worked with years ago—

surely she doesn’t remember me, yet here she is,
bent almost parallel to the ground, three thousand miles

from the children’s unit. November rain
in the last few coppery leaves. And the absurd

little grace notes of lichen and moss. Olive trees
in Tuscany have this same stubborn shape,

as do gnarled pines in T’ang Dynasty paintings.
So, a Taoist Italian tree is Donegal with a Puerto Rican soul:

I know I’m home when I reach this crooked rowan.
Axe-cuts a quarter way through the trunk:

why would anyone want to fell
one of the glen’s only trees? Marisol, I doubt

sweet music in its branches. Downhill,
the smooth scar of the abandoned railway

disappears into the bog. Nothing much left in this gale
but one hobbled tree. From which a girl might step.