“The overall feeling of the book is of waiting, of speakers about to act but frozen in the moment before action. And in that moment is beauty, unspoken yet actual, brought to terrible fruition by speaking in/of the poem.” — North American Review

“The overall feeling of the book is of waiting, of speakers about to act but frozen in the moment before action. And in that moment is beauty, unspoken yet actual, brought to terrible fruition by speaking in/of the poem[.]”— Vince Gotera, North American Review

In the Capital Times of Madison Wisconsin, Heather Lee Schroeder has written a feature article on Red Summer, illuminating Amaud Jamaul Johnson’s writing process, and how he came to write an award-winning volume of gorgeous poems about the lynchings that gave the summer of 1919 the name “Red Summer.” In it she states:

These lyrical poems offer insight into the summer of 1919, when nearly 100 African-Americans were publicly executed (14 of them were soldiers who served in World War I), even as they illuminate the lives of African-American men today.

Winner of the 2004 Dorset Prize selected by Carl Phillips

A brilliant African-American poet writes of lynching, domestic abuse and love as he examines the race riots that swept the United States in 1919 in haunting, passionate poems, marked by a tender lyrical quality inspired by the blues.

“Equally confident within the lyric and narrative modes, Johnson’s Red Summer startles and impresses with its sheer range of vision, at one moment giving us a hushed, confessional poem, at another a poem of public, political consciousness… Johnson speaks from a space he describes at one point as “between gravity and god”—that is, past the provable, material world, but just shy of any clear confirmation of prayer or faith—and it’s a particular kind of faith that these poems at once enact and point to, what Robert Hayden called “The deep immortal human wish,/the timeless will,” the will to believe. Johnson’s poems remind us that the human record is at last a mixed one: violence, shame, betrayal, and fear, but also joy, courage, love and, yes, hope. Red Summer gives us the stirring debut of a restorative new American voice.”—Carl Phillips 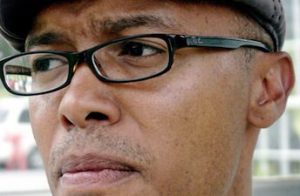 Born and raised in Compton, California, Amaud Jamaul Johnson was educated at Howard University and Cornell University. His first book, Red Summer (Tupelo, 2006), was winner of the Dorset Prize. A former Wallace Stegner Fellow in Poetry at Stanford University, his honors include fellowships from the Bread Loaf Writers’ Conference, the Hurston/Wright Foundation, and Cave Canem. He teaches in the MFA Program in Creative Writing at the University of Wisconsin—Madison.

By the end of the first,
blood, sweat and saliva
pooled at their feet, swirled like
dashes of hot sauce in a bucket
of egg whites, fell first in drops
then by the drum.

Across a field of straw
hats and seersucker suits,
Toledo’s finest, wet with
Willard’s insides. One woman,

genteel in dress, leaned forward
with her lace handkerchief
and asked the referee for a tooth.

Dempsey’s now freckled face,
calm and careful as a butcher’s
before the final chop.

Chicago Citizen Testifies in His Defense

July 27th, 1919: Eugene Williams, 17, found dead at the 26th Street Beach, who apparently drowned after being struck on the head by a blunt object.

What might seem like dumb luck
isn’t, it’s not happenstance, or being
in the wrong place at the right time,
it’s about learning to see a certain point
in the air, and wanting to touch it
with the stone. What I know about
religion, I know what the sky calls
from your hand, you deliver. I know
the angle of ascent, the pitch and point
of the line, and I’m not ashamed.
The fate of the rock, like that of the boy,
falls somewhere between gravity and god.

After her divorce
The first thing my mother
Bought was a Firebird;
Candy apple with a phoenix

Spread-eagled on the hood,
The words “Formula One”
In two-tone racing stripes
Along the sides.

My stepfather drove an olive
Toronado. He had a habit of hitting
Stray dogs in our neighborhood;
Three by my count, and one

So big it dented the grill
And bloodied his windshield.
He walked the hallways
Of our house that way

Reckless and always ready
To run somebody down.
Sometimes, I wonder how many
Miles we tiptoed in those years.

He promises a canary dress, white gloves,
says they’ll eat chops, thick as her thighs,
that they’ll order doubles of the “finest,”
see all the Big Names when they arrive.
But it’s the thought of them dead:
half of what they own draped around them,
her head against his chest, his back slack
against the headboard, all their letters unopened,
bills not paid, long knocks, the notices tacked
outside their door. It’s not knowing
whether some smell would introduce them
to their neighbors or a landlord wheeling
them out into the hallway; the highboy
he’ll chip on the drive up, the silver
she inherited from her mother, her hatboxes,
stacked high next to them like a wedding cake
waiting to be buried. He heard that “up there”
the wind had talons sharp enough to hook
a grown man beneath his collarbone and carry
him a full city block. He heard that you learned
the months by measuring the length of their shadows
and even summer was like a quality of night.

Watch the fire undress him,
how flame fingers each button,
rolls back his collar, unzips him
without sweet talk or mystery.

See how the skin begins to gather
at his ankles, how it slips into
the embers, how it shimmers
beneath him, unshapen, iridescent,

as candlelight on a dark negligee.
Come, look at him, at all his goods,
how his whole body becomes song,
an aria of light, a psalm’s kaleidoscope.

Listen as he lets loose an opus,
night’s national anthem, the tune
you can’t name, but can’t stop humming.
There, he burns brilliant as a blue note.