In his third full-length book of poems, Joshua Corey puts the sonnet to the test with this sequence of fractured, ventilated, and unrhymed poems written in the aftermath of 9/11 while Corey was living at a pastoral remove from war and terror in upstate New York. The tension between idyllic personal circumstances and horrific world-historical events led Corey to produce this series of layered poems, variously sardonic and sincere in tone.

Beyond pastoral—or perhaps in keeping with the tensions by which pastoral is generated—Severance Songs is also a specimen of that other thoroughly outdated and suspect mode, serial love poetry (in this case addressed to the poet’s future wife). It is a work of improvised yet layered experimentalism, commendable both for its deep engagement with the thorny philosophical problems of writing pastoral in the 21st century and for the smart, sensual verve of its verse-craft.

Corey’s Severance Songs reinterprets the sonnet form. What is a sonnet in the world of Severance Songs? A poem of fourteen lines, a meditation or prayer, a flash of ether fitted with internal and feminine rhymes. There were moments of grandeur, and importantly, fealty to the art of poetry and print culture.

[Corey’s] poems are sonnet-like less for their containers than for the bright shapes they contain. The sense of a sonnet, these poems suggest, isn’t in formal configuration but in a manner of speaking, of talking to oneself, of talking things through. In Severance Songs, this manner reels through landscape to render the ‘pool of newsworthy airs’ that ‘surrounds my perception.’

In terms of lineation and the lack of recognizable rhyme schemes and rhythmic patterns, these fourteen-liners are unlike traditional sonnets, but almost each one of them is rich with allusion to the English and American literary canons

Winner of the Dorset Prize
Selected by Ilya Kaminsky

In his third full-length book of poems, Joshua Corey puts the sonnet to the test with this sequence of fractured, ventilated, and unrhymed poems written in the aftermath of 9/11 while Corey was living at a pastoral remove from war and terror in upstate New York. The tension between idyllic personal circumstances and horrific world-historical events led Corey to produce this series of layered poems, variously sardonic and sincere in tone.

Joshua Corey’s book of sonnets is formally playful and emotionally raw, with an intensity of expression that is at times harrowing….[A]n extraordinary volume.

These songs shuttle between a past and a future, cast adrift or severed from a violent, ashen present into a necessary untimeliness…. What then of the sonnet, repository of desire and enemy of time? It is, as ever, that form by which we re-imagine subjectivity to confro t altered circumstances, and to assess ‘the shipwreck of the singular’ in the maelstrom of the many….

—Michael Palmer, from “On Joshua Corey” in Conjunctions 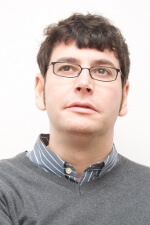 Joshua Corey graduated from Vassar College in 1993 and earned an M.A. in English literature and an M.F.A. in creative writing from the University of Montana. He was awarded a Stegner Fellowship in creative writing from Stanford University in 1999, and received his Ph.D. in English from Cornell University in 2007. He is the author of Selah (Barrow Street, 2003), Fourier Series (Spineless Books, 2005), and two chapbooks. He teaches at Lake Forest College in Illinois.

The music man wears a high hat. Laugh while you can.

Striped by his uniform, his xylophone back, the vaude-
villian’s whip and trombone lipstick.

Instead of walking on water he sets Matilda to waltzing.

This was always a small town on the edge of the plains. Thunderheads in the east. We never inquired,
even when a lightning bolt rattled the steeple.

He came for the children and rats, for classical learning
and Lydian airs. Gave us a pleasing, intolerable scare.
Left the west, plinking.

That temple horn
lifted out of roofs the tornado sky, finger of wind
like an answer to thinking our kneedcapped imaginations.

His lips’ thin horizon cut a smile of the eyes
into law’s human keeping. Fled—
music—

answers a human’s humid sprawl. So eyes seek
a line of hills where napalm walked. Anniversary

forswears the details in a triptych, foresees
the third as an artificial lake hemmed
by red dams surrounding creeping mists

into which civilian legs go scissoring.
A made thing, a view of delving, an ack-ack
trembling the Palestine Hotel. Of the earth,
of this foundry, I hew cold knowledge
by handle. At peace I do piece-work, at war

I warehouse for wiser generations
these culpability cantos, weary to put down.

Sunshine. We know about that. Light keeps
its covenant with the eye and lends it seeming.
A flicker. With a fiberoptic wand the surgeon
introduced his gaze to a sundered system
of stars and polyps, stray cells sex-drunk,
splitting and slick in secret. Sibilance tickling
the inner ear, anxious itch. Gray matter.
We know about it. We know all’s gray
till the sun or sun’s proxy peels a life
for what looks back. Uncanny now in the presence
of my mind, bones never suspected shiver
against each other, sparking songs I can almost see.

We know. When I look to find you asleep
until your skin is a sun that stares. 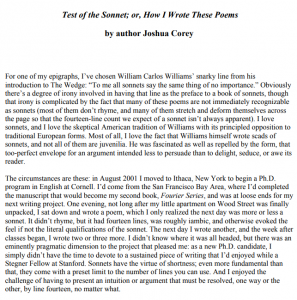