Using essays, diary entries, prose maps, and verse fragments, Kazim Ali marks a path through quantum physics, sixth-century Chola Empire sculptures, the challenges of literary translation and of climate change, and destruction of a priceless set of handmade flutes by airport security. Amid shards from far-flung histories and geographies he finds the cosmos.

“Award-winning poet Kazim Ali….unveils a multitude of facets in this jewel of a book.”—RHINO.

“Here is a vast, courageous text investigating race, separation, the molecules of space, the love of his man, and many other parts of this Living Universe in an entirely fresh and exhilarating perspective. Here is the harmony I have been seeking.” —CAConrad

“Kazim Ali extends to us a living and moving wondering in Silver Road — an active and rational thinking, yes, though poured from the vessel of body, its clay, breath and frailty. . . . Here, I can ‘stare into the dark of Nothing to see.’ Then see both ancient and newborn constellations of theory, beliefs and dreaming; see the intersections; see relationships. . . Ali’s admission of aloneness . . . causes the space of loneliness itself to collapse.” —Layli Long Soldier

“Poet Ali (The Far Mosque) combines smatterings of verse with memoir-tinged prose in an exploration of our spiritual and physical connections, or lack thereof, to the Earth and one another. He transforms readers into his companions on his travels around the globe and on an interior philosophical quest. Are humans essentially alone, the book asks, or does this essential loneliness connect us all? Ali pulls in scientific concepts, comparing the “intuitive leaps that quantum and particle physics make about the nature of reality” to those made by poets, and spiritual concepts such as the Islamic tenet of kismet, which he parses as the “net of infinite relationships” between people. Ali synthesizes imagery from poets such as Emily Dickinson and Amiri Baraka that examine feelings of loneliness and the effect of the world’s material conditions on personal relationships. The author also examines how his identity as a queer person of color has influenced his perception of connections between himself and others, especially to his conservative religious family. These connections, he explains, are weakened by the “rules of gender and sexuality” among other “codes” used to categorize people. His queerness “reveals better that latent quality of loneliness shared by any mortal thing.” Ali cleverly spurns convention for this excellent mixed-genre collection.” —Publishers Weekly

“Award-winning poet Kazim Ali….unveils a multitude of facets in this jewel of a book. Silver Road invites readers to examine and mull over a variety of forms and fragments, molecules of compressed thought and feeling. Lyric essays and meditations, journal entries, prose poems, and prismatic detours convey us through a variety of settings….From juncture to juncture on his Silver Road, Kazim Ali considers the infinite network of connections that binds things to each other as well as jars them loose. The book is a quantum universe where poetry and music, complex family relationships, and climate change are discussed together; where glaciers become rivers as they ‘cross the border from Chile down into the lakes of Argentina…transitioning throughout their journey from liquid to ice to liquid again, rolling down with the same deliberate and thunderous force that plates of continents roll together.’…it is comforting to have Kazim’s Silver Road as travel guide.”—Luisa A. Igloria, RHINO

In 1953, Yoko Ono wrote a score called “Secret Piece,” an open-ended formula for musical performance in a forest at daybreak. Beginning with this invitation to creation, and using essays, diary entries, prose maps, and verse fragments, Kazim Ali marks a path through quantum physics, sixth-century Chola Empire sculptures, the challenges of literary translation and of climate change, and destruction of a priceless set of handmade flutes by airport security. Amid shards from far-flung histories and geographies he finds the cosmos. 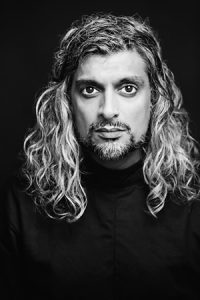 Kazim Ali is author of eighteen previous books, including poetry, novels, memoirs, and translations. Born in the United Kingdom to Muslim parents of Indian, Iranian, and Egyptian descent, he grew up in Canada and the U.S. Ali has taught at various colleges and universities, including Oberlin College, Davidson College, St. Mary’s College of California, and Naropa University. He is currently a professor of Literature and Writing at the University of California, San Diego.