“If you love the idea that poets are whacked-out crazies driven to drink, drugs and suicide by souls too sensitive for this brutal world, Spill by Michael Chitwood…will break your heart.” – Raleigh News & Observer

Reviewer Evan Gurney of Carolina Quarterly takes a moment to meditate on Michael Chitwood’s Spill. He is especially taken by Chitwood’s occasionally Puckish sense of humor in the midst of reverent contemplation: ‘We reach the sublime heights of bathos in the culminating pun of “On Being Asked to Pray for a Van,” when the speaker ends a long litany of ironic requests with a delightful snicker: “Creator Spirit, Holy Maker of the Universe, / give them gas.” That same subtle hint of derisive humor courses through “If I Should Die before I Wake” until the sarcasm transforms into a genuine appeal for divine protection: “Old last thing said, / before I die / let me wake.”’

The Raleigh News & Observer contains a wonderful review by noted poet Andrew Hudgins of Michael Chitwood’s Spill, (recently named a finalist for the ForeWord Book of the Year Award!) that begins with this wonderful paragraph: “If you love the idea that poets are whacked-out crazies driven to drink, drugs and suicide by souls too sensitive for this brutal world, Spill by Michael Chitwood and Old War by Alan Shapiro will break your heart. … [B]ecause they write with the sensitivity of poets, they will break your hearts anyway — just in different, smarter and more useful ways than the wild men.”

Spill has been named one of the ten books to buy in in post-Thanksgiving 2007 by Susan Davis, who writes for the Raleigh News & Observer. Her recommendation reads, “These are poems that manage to examine the tiny miracles of nature while praising the most profound truths of the universe. Chitwood is imminently[sic] readable and accessible, which can’t be said about all poets or poetry.”

Spill is a book of spiritual yearning, grounded in the here and now of airport terminals, the backyard, a rainy morning, and a broken down church van. With finely honed, vibrant imagery, this poet’s audacious imagination chisels away at the mundane and unearths the miraculous in his eighth poetry collection. The book is divided into three sections. Chitwood’s distinctive vision begins simply, as he evokes an Appalachian upbringing mired in pious certainty and yet haunted by spiritual craving. We follow the pilgrim’s path in the following segment, as he attempts to wring holiness from the merely terrestrial, finding only fleeting glimpses of the divine. The final section turns contemplative, as the speaker tries to comprehend the course he has taken and find solace and wisdom in his journey.

Chitwood’s verse is sharp, spare and unpretentious, wonderfully surprising and yet deeply profound. Words are neither wasted nor superfluous; he never forgets that this is an honest conversation with the reader, and he uses the common tongue and humor of a man in thoughtful dialogue with his fellow creatures.

Tupelo Press is pleased to provide the Spill Reader’s Companion in free, downloadable PDF format. Click on the link to download. (139 K) 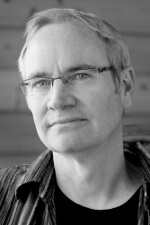 Michael Chitwood has worked on a construction crew, in a textile mill, and for a highway department; he is also the author of seven volumes of poetry and two books of essays. Having graduated from the only high school in rural Franklin County, Virginia, he earned a BA in English at Emory & Henry College and went on to work for the University of Virginia Medical Center as a science writer and editor for Helix magazine, meanwhile earning an MFA. For a number of years, he was a science writer and editor at Duke University Medical Center and Research Triangle Institute; he is now a professor at the University of North Carolina — Chapel Hill.

Even when the Ford Torino
went down the bank to the creek
and three people got where they hadn’t intended to go,
one a little girl,
yea, even then.

Because we make mistakes doesn’t mean God does.
The tall grass beside the creek was mashed flat.
There was one woman’s red shoe for a slender foot.
No one thought to pick it up.

No one said the sky was only blue and empty.
That terrible canopy was thunder full
of the hot hating of sin.

The Morning After Being Saved

That he woke up was wrong.
He would discover later
that he was hung over,
not exactly sure what was said and done.
Spirits were invoked
but with a pair of eggs staring at him
the Lord seemed off somewhere,
snagging dust bunnies in a corner of the Celestial Palace.
That afternoon he recalls
the blue, eye-stinging water of the pool
was troubled as it always was
after the big boys did their cannonballs.

To Be Saved You Must Be Spent

The blast from the bees’ wings
is enough to knock the blossoms
from the wisteria, late spring
and the sexual clouds of pollen
are dissipating in the backyard.
The blooms’ purple confetti litters
the yard, the parade gone by,
and the dogwood is dropping pieces
of a letter it’s shredded,
white scraps with just a dab
of ink staining each one.
The words might have proclaimed love
or been an official notice of death.
All that can be said for sure
is that the blue torque of the sky
has tightened. 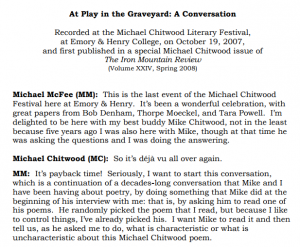