A work of uncanny originality, David Huddle’s nineteenth book is the account of an extraordinary death trip taken by a charismatic and beloved woman, her husband, and an astonishing number of offspring, from infants to young adults. The Faulkes Chronicle explores how children grieve, and shows how the wit and courage of even the littlest brothers and sisters can be a source of resilience.

Also available for iPad – click here to buy on iTunes.

“The Faulkes Chronicle will reward the reader with a portrait of an American family both ordinary and extraordinary, a portrait so sweeping it calls for landscape mode. I do not wish to lay an interpretive burden on this marvelously readable, touching novel, which has the elegance of simplicity without being simple in the least. However, the book resonates deeply on the theme of saying goodbye to one’s mother, whether that occurs through the literal death of a parent or the natural, inevitable maturing of the child into adulthood.”— Ward Raymond, The Pulse

“Death comes for everyone, of course, but when it comes for the mother of the improbably large Faulkes family, it takes on a transformative aspect that astonishes her children, mesmerizes strangers, and confounds her caregivers. As observed by one of the more than 30 children ascribed to the Faulkes clan, their mother’s capitulation to cancer is less a battle, more an internal pas de deux; she grows thinner and frailer, but in doing so she sheds the hefty plainness that the Faulkeses wear as a badge of pride and abandons the famous Faulkes stoicism for whimsy and guile. Their mother’s emerging beauty draws each child, from adult to infant, into her aura as they greedily monopolize and gratefully share their remaining moments together. A vividly striking yet subtly nuanced portrait of a family’s past and future emerges despite, or perhaps because of, a present mired in perplexing uncertainty and assured grief. Children pop up like toadstools, offering nothing more than a pithy observation or plaintive memory, yet in Huddle’s (Nothing Can Make Me Do This, 2011) dexterous hands a few words can convey volumes. The Faulkes clan is indomitable, and Huddle is a master at mining the depths of a discomfiting situation. A marvel.”— Carol Haggas, STARRED review, Booklist

A work of uncanny originality, David Huddle’s nineteenth book is the account of an extraordinary death trip taken by a charismatic and beloved woman, her husband, and an astonishing number of offspring, from infants to young adults. The Faulkes Chronicle explores how children grieve, and shows how the wit and courage of even the littlest brothers and sisters can be a source of resiliance.

Familial conversation composes an intimate requiem, transforming loss into comprehension. Only one of our finest writers could manage this delicate material. The Faulkes Chronicle is a brief, autumnal novel — made of momentary details yet with an encompassing grandeur.

“I was swept away by David Huddle’s utterly unique novel, which is ultimately a profoundly moving meditation on death, on a great and unsentimental familial love, on the role of storytelling, and finally on how hard it is to say goodbye to a beautiful life. By aligning us with the dying character and those who love her, we get to see a charged, particular world as if we too are looking at it for the last time. I’ll never forget the achingly beautiful scene of this family at the beach. And yet, for all its’ contemplation of death, this is somehow also, mysteriously, a very funny book. The Faulkeses are funny in their great solidity and their rejection of all things fanciful. Their interconnectedness shines a light on our relative isolation in a culture long obsessed with the individual. This is a stirring, deeply imaginative and beautiful book.” — Jane McCafferty

“The slow death of the matriarch of the Faulkes clan becomes an occasion, in this lovely, moving novel, for a meditation not on death but on life. Over the months during which their beloved mother both gradually fades away and yet becomes, as her end approaches, incandescently present, her many children — and her husband and her physician — make their way along grief’s hard road by telling stories about her, about each other, and about themselves. Only a novelist as gifted as David Huddle is could make a tale whose sad conclusion is already known both mesmerizing and ultimately affirming. To chronicle something is to document its events and occasions, of course, and The Faulkes Chronicle is a beautiful, triumphant record of the ties that bind a family together in the face of its greatest tragedy.”
— Carrie Brown, author of The Last First Day 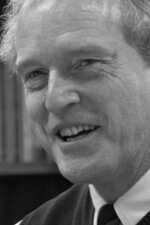 Originally from Ivanhoe, Virginia, David Huddle taught for thirty-eight years at the University of Vermont, then served three years as Distinguished Visiting Professor of Creative Writing at Hollins University. He now teaches at the Bread Loaf School of English, the Ranier Writing Workshop, and the Sewanee School of Letters. Huddle’s writing has appeared in The New Yorker, The American Scholar,Esquire, Harper’s, The Georgia Review, and in many other publications. His novel Nothing Can Make Me Do This won the 2012 Library of Virginia Award for Fiction, and his collection Black Snake at the Family Reunion won the 2013 PEN New England Award for Poetry.  (photo by Chip Reigel) 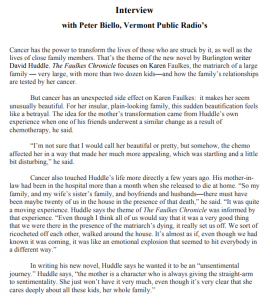