“Kathy Nilsson’s poems hold about as many promises as any I’ve encountered. … Her work astonishes me.”
— Lucie Brock-Broido

Each poem in The Infant Scholar is an homage to those born brilliant and vulnerable, those who carry around with them a great comprehension at odds with their age. These poems are built upon facts and observations unearthed while panning the world for gold: diamonds sewn into the Romanov corsets that deflected bullets, or a lift-off in some early space flight to the moon, with a chimpanzee at the helm; Iphigenia saying goodbye to her beloved daylight, and Edward R. Murrow describing what soldiers heard as they entered prison camps at the end of World War II: “the handclapping of babies.”

“Kathy Nilsson’s poems hold about as many promises as any I’ve encountered. … Her work astonishes me.”
— Lucie Brock-Broido

“These poems startle me into happiness. They distract me from the dull matters at hand. They remind me of what it’s like to live.”
— Timothy Donnelly 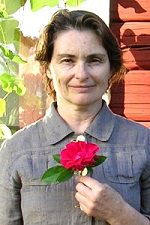 Kathy Nilsson earned a BA from Mount Holyoke College and an MFA from the Bennington Writing Seminars. Her poems have appeared in Ploughshares, Boston Review, Poetry Daily, Columbia, and Volt, among other journals. Her chapbook The Abattoir was published by Finishing Line Press in 2008, and in 2011 she received the Poetry Society of America’s Robert H. Winner Award. She lives in Cambridge, Massachusetts, with her husband and son.

THE PILLS you take to help you sleep, sleep for you

When daylight eases in illuminating planks

Your kids will walk into the ocean, walls made

Ballooning with fat, a mammoth in the driveway

Laced with insects and glistening THANK-YOU

RED—— by afternoon the thief has fled with sacks

Of diamonds the size of birds’ eggs—— your life is

Fake instead of a masterpiece and your dog is a sphinx.