“The Us is like nothing I have ever read or seen. These poems are just extraordinary: wildly hewn, classically construed and skewed by an imagined lexicon.… In a voice that is elemental ancient, animistic, pre-lingual even, the speaker manages, with nothing short of magic, to communicate… in a language both syntactically inventive and radically simple.” – Lucie Brock-Broido

Few contemporary poets dare brave the epic; the shadow of the Ancients is not just long but consuming. Houlihan’s courageous The Us is an allegorical epic of the first order: an affecting tale of otherness, modernity, violence, and identity.

Although the book is mythological in its scope, it is lyric rather than epic in its approach, proceeding not with heroic pomp and encyclopedic comprehensiveness but instead with lyric delicacy and attention to carefully chosen particulars. The Us is not monumental, nor is it meant to be.

Also includes an interview with Joan Houlihan and new poems.

“If this book sounds like nothing else you’ve read, it isn’t. The distinctiveness of The Us from the one-thousand or so single volumes of poetry published each year in the United States is remarkable. From the first section, in which we encounter the ‘us’ ‘portrayed in everyday life,’ to the last, in which a tenuous order is restored to the tribe, again and again the reader is struck with the question: who else could’ve written this? The answer of course is no one.”

The Us is a breathtakingly memorable collection which celebrates the startling things language and story can do. These poems touch on raw power in their invention. With The Us, Joan Houlihan has pushed the possibilities of poetry.

Jack Tres has posted a great description of the uncanny texture and arc of The Us at the Mowgli, Esq. blog:

In this string of narrative poems, Joan Houlihan gifts an imagined tribe with English. The language the nomads return to us is begrimed, streaked with sweat, stinking of smoke, wild of eye, and three-fourths feral. ‘Ice-taught, bit by sun’s low arc,’ the tribe foots a hard route and gives rise to a poetry as rough and exciting as an arrowhead clawed free from a patch of land we all thought had been picked over and parceled out.

Craftwork abounds. Houlihan looses iambs as taut as skin and with all the rum-pum of a tribal drum (‘A smoke struck high on a night’s half-light….’) and sometimes steers the poems into rhymes so tidy you’d sing them in the nursery if only they weren’t about, say, the final hours of fetid, fly-festooned livestock (‘…hog and cow, sheep and fowl / bled black and brayed to blue- / wide-eyed and the light gone through.’) Can’t bed down baby with that one, but the point remains.

Running through each of these poems is a vein of ungrammatical speech, all of it arrestingly nascent and novel. When some wronged horses prove uncooperative, the tribe tells us, ‘Thems sickened to us. All the light went out / inside thems coats.’ Impossible not to read aloud a language so textured and freshly-forged, so don’t resist. Intone alone in your bedroom. Clear yourself some space on the subway.

Embark. Houlihan’s wanderers will have your heart louding while they’re here, colding like a cookfire forgotten once they’re gone.

Read the original review (and see a beautiful collage made in response to the book) here.

Dean Rader speculates about broader implications of the controversy sparked by The Us as readers have responded to Fiona Sampson’s critical review in Poetry magazine:

“… Joan Houlihan’s wild new book of poems, The Us,… tells the story of a nomadic group of hunter-gatherers (the Us) who are at odds with the hegemonic band of hunter-gatherers (Thems).… With its ritualistic rhythms and gestures and its Yoda-like syntax, it is one bold book. I’ve never encountered anything quite like it.…

“… The Us is the Twin Peaks of American poetry. It weaves in and out of reality, it plays with perspective, it sets up a moral dichotomy, and it splits its audience into camps that think it’s genius and those that think it’s gibberish.

“Perhaps the riskiest move of all is Houlihan’s decision to play with vocabulary. Like Twin Peaks, there are experiments with language, word order, and plurals. It recalls novels like A Clockwork Orange or those Hobbit movies where people speak a funked-up English. This move is probably both the strength and the weakness of the collection. I thought most of the attempts worked; some did not. But, I was always amazed by how brave the project is.

“… You’re either willing to go along with the project, to suspend disbelief and be invited into the wacky world of The Us, or you’re not. But, the problem is, if you side with the latter, then you’re not an us anymore… you’re a them. And, I think they all watch Fox.”

Kirk Etherton reviewed The Us from the Ibbetsen Press blog:

Joan Houlihan’s new book The Us is truly Something New, in all the best ways: it is completely original, thought-provoking, timeless, and written in a way such that any intelligent reader—from the pre-undergraduate to the most jaded professional poet—will quickly be captivated and intrigued.

The Us is a novel-like sequence of poems spoken in a collective voice. ‘Us’ is identified at the outset as a ‘group of primitive people who speak as one.’ Us is comprised of six individuals, including ‘father’ (leader of the us), ‘ay’ (oldest son of father), ‘brae’ (the second son) and ‘g’wen’ (the wife and mother). What follows is a description of everyday life, travels, pivotal events, successes and setbacks faced by this tribe of hunter-gatherers as they make their way in the world—a world which includes a stronger, more advanced group (‘Thems’), with whom they can exist only as slaves.

Houlihan has achieved something remarkable in the way the Us speak to us: you may feel as though you’ve stumbled across something written thousands of years ago in an unknown language—something almost pre-literate you can, for some reason, understand without difficulty. The writing manages to be simultaneously primitive and poetic. (The last place I encountered language this unexpected was in the beginning of The Sound and the Fury. )

The Us, Joan Houlihan’s tantalizing third book of poetry, is a poetic sequence spoken in the collective voice of nomadic hunter-gatherers. Incompatible with a stronger, more advanced culture (“Thems”), the Us must live outside civilization in order to be free and fully alive. Practical and canny, the Us are also possessed by a sense of awe expressed in superstition and ritual. With echoes of classical mythology, age-old legends, and resilient allegory, this is an absorbing and altogether unique book of poetry. Houlihan’s language is ancient in sound and texture yet entirely modern in impact.

Tupelo Press is pleased to provide The Us Reader’s Companion in free, downloadable PDF format. (196 K) 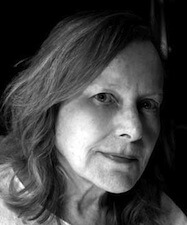 In addition to Ay, Joan Houlihan’s previous books are The Us, named a must-read of 2009 by Massachusetts Center for the Book, The Mending Worm, winner of the Green Rose Award from New Issues Press, and Hand-Held Executions: Poems & Essays. Her work has been anthologized in The Iowa Anthology of New American Poetries (University of Iowa Press) and The Book of Irish-American Poetry—Eighteenth Century to Present (University of Notre Dame Press). She is a contributing critic for the Contemporary Poetry Review and author of Boston Comment, a series of essays on contemporary American poetry archived at bostoncomment.com. She is founder and director of the Concord Poetry Center and the Colrain Poetry Manuscript Conference and she has taught at Columbia University and Emerson College. Currently on the faculty of Lesley University’s Low-Residency MFA Program in Cambridge, Massachusetts, she also teaches part-time at Clark University in Worcester, Massachusetts.

A kind of cold

A kind of cold and moon rise
changed the air and told us
coming dark. Us cut the elk
apart — hoofs tossed —
and by antlers pulled
hims head, eyes alive.

Hail the kill and all it bring!

Ours father, bowed and slow, behind,
would point us on, not keep to him.

As fruit begins by seed and shows itself in time
the gleam that sees from night grew in.

From dirt, a stir

From dirt, a stir put forth its mix, smell
of weed and green-held bud, deep cups
sweet and sharp. Warmer started day.
Sun lay wider where us walked.

And ay had seeing out to hers — long cloth tied
with hemp, of smaller head than ay, and that head bent
to sounds from brae, hers hair a gleam-fall over him,
the weaker, full of noise for her and lifting up.

And ay would turn to watch the smoke
go high in thin and thinner twist
the way the sun must bring its burning home.

From branch shaked out

From branch shaked out and speckled egg,
us made new eating, not to harm
the ones of hoof and horn
and ground were dug and seeded
taking those to plow who were ours tame.

Night and day, day and night,
sun and rain took up the work
and gave a take of all the fruited
riped and sweet from green.

Us lived, and us of all, as to a light
and drinking from the sun.
Night kept us as would a pelt
of highest fur, the stars its eyes around. 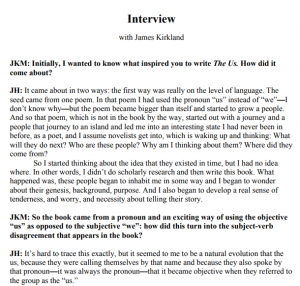