This novel is everything I want in a road trip and hardly ever get: cheap thrills, oddball epiphanies, big laughs, chance encounters and lots and lots of great, great talk. – Daniel Handler, author of the Lemony Snicket books

Poet Richman’s debut novel unfolds as a series of vignettes in which characters ‘appear and disappear, to gather and scatter accordingly.’ Because of the book’s nonlinear structure, the parts add up to far more than the sum, which may be the point. While much of the story is set in 2001, when the narrator, also named Jan Richman, is 39, many episodes occur 10, 20, or 30 years in the past. As a writer for BadMouth Magazine, ‘NYC’s Premier Cultural Crap Detector,’ Jan’s new assignment is to report on roller coasters around the country set for demolition. Her final stop is in California, where she grew up, and where her estranged and widowed father, who suffers from Tourette’s, is preparing to marry a much younger woman. The setting and narrator’s age are both withheld for longer than seems necessary, which may frustrate readers as much as the many abrupt changes in setting. Yet the author’s observational adroitness, skill with words, and clever use of cultural references mitigate those issues, particularly for anyone who came of age at a similar time as the narrator. Richman’s (Because the Brain Can Be Talked Into Anything) fine language falters during the book’s surprising sexual encounters, lurching between the funkiness of Tom Robbins in Still Life with Woodpecker and plain old purple prose.

With support from the Irvine Foundation, Tupelo Press is proud to partner with Small Press Distribution and BookMobile to create our publication available as an e-book!

Journalist and armchair thrill-seeker Jan Richman gets a freelance assignment to write about the nation’s old-fashioned wooden roller coasters. Jan takes off across the U.S. to report on a fanatical sub-culture. This picaresque research junket dovetails with the wedding of her Tourette’s-riddled father, whom she hasn’t seen in years. Brazen and stingingly funny, Thrill-Bent zooms from Coney Island to New Orleans to the San Fernando Valley as our heroine learns how to be truly impulsive in a buttoned-down world.

— Suzzy Roche, singer and songwriter, co-founder of The Roches

This novel is everything I want in a road trip and hardly ever get: cheap thrills, oddball epiphanies, big laughs, chance encounters and lots and lots of great, great talk.

By turns outrageous, beautiful, sexy, and hilarious. And without warning quite moving. Jan Richman is a terrific writer and Thrill-Bent is an amazing ride. 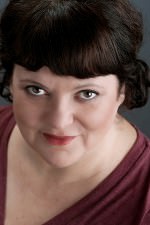 Jan Richman’s Because the Brain Can Be Talked Into Anything (Louisiana State University Press) was chosen by Robert Pinsky for the 1994 Walt Whitman Award from the Academy of American Poets. She has received an NEA grant in Literature, a Nation/Discovery Award, the Celia B. Wagner Award from the Poetry Society of America, the Felix Pollack Poetry Prize from the University of Wisconsin, and a San Francisco Bay Guardian Poetry Prize. She has a B.A. in English from San Francisco State University and an M.A. in Creative Writing from New York University, and has taught writing at Brooklyn College, the Academy of Art University, and San Francisco City College. Richman lives in Oakland, California.

“When the chain dogs bark and we are ratcheted up the first magnificent lift-hill, even though it’s early March and there are only a handful of customers in the park, I get that feeling I always get. I was born to ride…. This is my favorite part of any roller coaster experience…. The thrill of elevation, of being mechanically lifted to an outpost with an aerial view of the landscape — in this case a spectacular sweep all the way from Gravesend in the north, to the aquarium and Brighton Beach in the east, straight down the boardwalk in slatted increments, not to mention the ocean and the sky and the mammoth dinosaur Parachute Jump still standing on Coney’s shore from the 1939 World’s Fair. My head is bobbing back and forth like I’m watching a fervent tennis match….”