Szporluk’s fifth collection evokes an atmosphere as darkly portentous as that of Shakespeare’s play: the book is a wild, clever assembly of lyrics that work through a world of molder and rot, entrapment and transformation, love and—unabashedly—hate. –Publisher’s Weekly

“Like Shakespeare’s play, Traffic with Macbeth is a fearless journey into the depths of myth, the human psyche, and often violence. There is a density to many of the poems, which at times renders them a bit opaque. Yet, so well-crafted are the lyrics that the hard shells of her images beg to be cracked. Images that are impenetrable are simultaneously beautiful and terrible and remind the reader of the artistry of mystery. However, no matter the difficulty of meaning, Szporluk’s tone always rings clear.” — Erik Fuhrer, NewPages

“That we have seen sparse, direct, hyper-paratactic lyricism like this before does not mean we ought not celebrate one of its most talented practitioners. Szporluk is a master of the brief lyric, that focused brand of poetic intelligence that seems but a wisp until it adheres to the soul. Indeed, while the sounds and sights of Traffic with Macbeth are undoubtedly grave and gorgeous, there is also something incantatory—elusively uncanny—in the work. The spell this book weaves is at first too slight to notice; soon enough, however, Szporluk’s dark magic alights on your shoulder and begins its terrible, sublime, irreversible whispering. Haunting and lovely.”— Seth Abramson, Huffington Post

“In order to survive, the poem in its tiny ink must also offer a window into everything. Larissa Szporluk—whose name cannot help but always conjure for the reader its slant rhyme, warlock—is a poet who seeks to answer to this. In her latest collection of poems, Traffic with Macbeth, Szporluk demonstrates for us her own poetic periodic table of elements. Skin and womb, crickets and water, motherliness and eternity—these are the most basic structures of the world rendered in Traffic with Macbeth. They are terrifying, they are pleasing, but above all they are true.”— Sarah Crossland, Devil’s Lake

“Szporluk’s fifth collection evokes an atmosphere as darkly portentous as that of Shakespeare’s play: the book is a wild, clever assembly of lyrics that work through a world of molder and rot, entrapment and transformation, love and—unabashedly—hate. The hallucinatory delight of many of the monologues in this book comes from the poet’s assumption of a variety of speakers who are not psychologized but rather realized at the level of language: in the poem ‘Gargoyle,’ we hear the strange dimeter of the speaker’s ‘feeble dream/ of a mauve wet gut/ of a unicorn-dove,’ or, in ‘Windmill,’ the circling music of heavy enjambment: ‘I can’t cry so I/ smack the extent/ of my face but I/ can’t so I hate/ the oblique of my/ vanes.’ Throughout the collection, Szporluk’s verse, which ranges from dreamy to strange to grotesque, sounds like neither Shakespeare’s pentameter, the rhythm of natural speech, nor like the free verse favored by most contemporary poets, but rather most resembles the clipped, rollicking incantation of the charm of Macbeth’s three witches. Desperate, dense, horrible, and lovely, Szporluk’s work is, to use those witches’ words, a similar ‘charm of powerful trouble.’” — Publishers Weekly

A buffeting sequence of dramatic monologues that provoke and disturb, Larissa Szporluk’s Traffic with Macbeth evokes a dark world linked to the black magic of Shakespeare’s tortured Scottish assassin, usurper of kings. Baroque in their sweep of high style and low slang, melody and dissonance, these poems use shifting animate and inanimate speakers and surrealist leaps to convey human brutality, the vulnerability of women and children, madness, and the struggle to escape the limitations of this world. 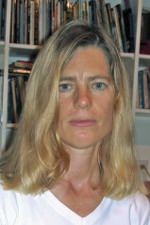 She is the author of four previous books of poetry: Embryos & Idiots (Tupelo, 2007), Dark Sky Question, winner of the Barnard Poetry Prize (Beacon Pres 1998), Isolato, winner of the Iowa Poetry Prize (Univ of Iowa, 2000), and The Wind, Master Cherry, The Wind (Alice James Books, 2003). Her work is included in Best American Poetry 1991 and 2001, New American Voices, and numerous other anthologies. In 2003, she received a National Endowment for the Arts grant to work on Embryos and Idiots.

Once at war, always at war.
Healing? I am healing in the field
by charging forth. Retreat?
Not when the fodder’s slopping
through mud, fizzing and flaring
where I chewed as a filly. Not
when the lousy house of a snail
blows its fuse and bursts.
Once a mount, always a mount—
the rawhide balls of bullies
still break with my bucking wave.
In childhood, battery meant
“beating on it.” Beating on a thing
to make it work. Truce? I was told
it would pass, whatever it was,
and we’d all sign the dotted line.
When the rye was shoulder-high,
they lit my tail and laughed
while I plowed the freaking acre.
The future ate my boneyard,
but viva, I’m on fire, I’m the rage.

The flower life,
at eventide,
falls to cloven ruin.

He turns his face
from Venus, that shiny
jumping bean, and broods

upon the magnitude
of stars he’s yet
to chew. Looking

down between his feet—
something sickly blue
astir—his niece,

like sauce, has spread
herself across his
world view.