Vacationland is reviewed on the Emerging Writers Forum.

The literary journal Boston Review features a review of Vacationland.

Vacationland is a 2005 Summer Reading Recommendation on NPR along with Monson’s Other Electricities. You can hear the full program including the Monson coverage by selecting the “Listen” button.

These are pleasure-inducing lamentations with an enticingly experimental edge. They elegize Michigan’s Upper Peninsula, the copper mines, tourism, family, amateur radio, winter, and much more. These poems are affected by the claustrophobic, half-year Michigan winters, where the nearest city is a four-hour car ride. Monson’s is a wildly original mind, creating exotic variations on traditional forms. 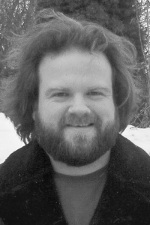 Ander Monson draws from his life in Michigan, Illinois, Iowa, the Deep South, and Saudi Arabia. He has an MFA from the University of Alabama. He edits the magazine DIAGRAM and the New Michigan Press, and publishes widely. His novel in stories, Other Electricities, has been newly released by Sarabande Books.

It covers everything, a glossy January rind
along tires. Sunny days have brought it out,
burned away the ice, left
the calcified tidelines to gloat
on the hoods and sun-warm trunks
of cars queued up along the curb,
parking close as they can get
to each other, to the raised
sidewalk that’s buried
beneath the dirt crust next to the neon-lit
sign for the funeral home.

The body of the boy we knew is still
inside, the cheeks teased
back to cheery life with rouge.

The ice on the canal
the faulty floor through which he descended
blazing on the back of his Arctic Cat
is black as slate
which means it’s thin
and boys on the shore
throw aimless stones that yield
ricochets with laser sounds.

The outdoor rink is bare, festooned
with bits of the Canadian flag
fragments of the maple leaf
glistening starlike after storm.

The Vacationland Motel’s swimming pool is filled
with dread and droppings, wings of desiccated bugs.
They refuse to hum and fill the air with that peculiar music.

The oldest fish in the world looms underneath the lake.
We drain our drinks, think of smelt, and set
the tumblers on the table that is made of frosted glass
where they will leave rings behind like angel skins or sickness.

My brother clucks his tongue at me.

Dad is in the woods behind;
you can tell by the pines’ parting motion
and that smell of work and blood and dog.

A woman wanders by with bags on her hands,
says nothing. She reeks of pitch and gristle.

Meat scent suggests a nearby grill.

Early evening stars are colander holes
through which the sky drains out.

This is the year where we define deceased.