“Step by step, line by free-floating line, Lee Sharkey walks backwards into the Jewish catastrophe in this deep book of remembrance—a collection of parables, an ongoing conversation with the dead, a tablet of fire.” — Edward Hirsch

“Step by step, line by free-floating line, Lee Sharkey walks backwards into the Jewish catastrophe in this deep book of remembrance—a collection of parables, an ongoing conversation with the dead, a tablet of fire.” — Edward Hirsch

“In Walking Backwards, Lee Sharkey deftly gleans the ancient stories and old cities for news, picking from Biblical narratives and old poems the grains that might feed us in our hunger. Like Walter Benjamin’s Angel of History–whose wings are buffeted inexorably into the future while facing the past—Sharkey walks backwards through Jerusalem and Vilno, witnessing the ghosts of refugees and concentration camp victims, while cradling a tender vision of kindness and hope. ‘So we mark our dark accomplishment,’ she writes, ‘Drawn between us, a line like living hair.’ I’m so grateful for Walking Backwards, its ‘scalded beauty’ and words that ‘light the long slumber.’” — Philip Metres

“These are poems of moral urgency. Through the refining fire of her art, Lee Sharkey transforms that urgency into form and voice. Her lines resonate deeply within us. The boundaries between the living and the dead, between past and present, self and other become permeable, and communal. ‘Even now, a century later: ink stain on my fingers,’ the poet says, as she explores how we both write and are written by history.” — Betsy Scholl

“You have to listen to these poems with the eye of your heart. What arises before that eye is an expansive plea for universal compassion — a sensibility we all may need to cultivate with creative determination in the coming years, given recent political events.” — Dana Wilde, Kennebec Journal | Morning Sentinel

“There is a Primo Levi-like honesty here, a capacity, beyond romanticization, for recognizing psycho-cultural forces that create folktales and archetypes, bridge present to past. The eternal question: Can we learn from the past? How can we know those who were once as alive as we — we who will one day become tales and images? How can we, as ancestors, bridge to our children’s children? And they to us? Lee’s poetry calls to those who share the healing mission of planting for the children.” — Anna Bat-Chai Wrobel, Jewish Currents

“On these pages we face the faces that have drifted off to the war: a war here unnamed and thus unlimited, yet filled with references to Jewish writers who faced Hitler and Stalin and thus genocide and the night of murdered poets. It is this company Sharkey invites us to keep with caution and moral plea. She obliges her readers as she does herself to become, in Susan Gubar’s words, the ‘proxy witness’ for those whose testimony sounds from the past and now draws our face to turn war-ward with them.” — Karl Plank, Consequence Magazine

“Lee Sharkey’s Walking Backwards powerfully resurrects the agony of the Holocaust, not by creating images of genocide, but by inventing a relationship with the language of the Jewish poets who protest the world’s barbarity. With humanity, skill, and lyric intensity, Sharkey communes with Markish and Sutzkever, and this dynamic, fearless interplay of poetic identities affirms the role of language as humanity’s most effective weapon against its own cruelty.” — Sonja James, The Journal

“Cautionary tales, in folk tradition, were warnings against dangers, threats, hazards listeners should learn how to avoid. ‘Cautionaries’ is a poem in eight sections, warning us not sure about what. Like a spread of tarots cards, each number describes a different scene, but they work together. Images are precise, vivid yet wild—they have the haunting fragmentation of dreams and their ambiguity. One word suddenly introduces doubt, shattering the surface linearity of the narrative.” — Toti O’Brien, Heavy Feather Review

Walking Backwards examines resistance to violence and repression through evocations of contemporary events and conversations with poets and artists whose voices arise from the Holocaust. Employing a remarkable variety of formal strategies— lyrics, parables, testimony, paratactic narratives and re-castings of Torah stories, inter-leavings with other texts—these poems offer a complex vantage on cultural erasure and persistence. Sharkey conjures a simultaneous present to reclaim a heritage expressed by gaps and silencing. Paul Celan, Nelly Sachs, and the Yiddish language poets Abraham Sutzkever and Peretz Markish become contemporaries, as her words mingle with theirs to bear the weight of the unspoken. “What have we come for,” the poet asks, “to sleep where the dead slept in the bed of our absence?” What redemption she finds is in language. 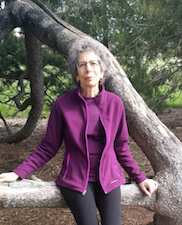 Lee Sharkey is the author of Calendars of Fire (Tupelo, 2013), A Darker, Sweeter String (Off the Grid, 2008), and eight earlier poetry collections. Her work has appeared in Crazyhorse, FIELD, Kenyon Review, Massachusetts Review, Nimrod, Pleiades,and Seattle Review. She is the recipient of the Abraham Sutzkever Centennial Translation Prize, the Maine Arts Commission’s Fellowship in Literary Arts, the Shadowgraph Poetry Prize, and Zone 3’s Rainmaker Award in Poetry, and she is a Senior Editor of the Beloit Poetry Journal.

Because the hands remembered what they had done
they exiled themselves from the house of the body.
From time to time they crept to the back door
where the kitchen girl would toss them scraps

and the hands, a little bit in love,
would do errands for her—tie her laces,
shelter the flame for her cigarette—
while her face drifted off to the war. 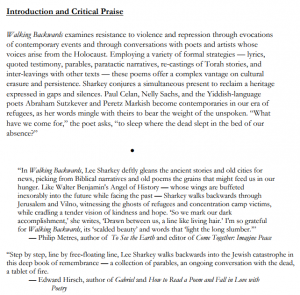 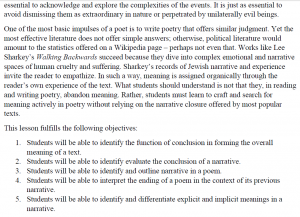