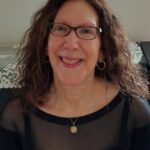 Nancy Naomi Carlson has authored ten titles (six translated). An Infusion of Violets (Seagull Books, 2019) was named “New & Noteworthy” by The New York Times. She has received two NEA literature translation fellowships, was a finalist for the Best Translated Book Award, as well as for the CLMP Firecracker awards, and was decorated by the French government with the French Academic Palms. Her poetry, translations, and essays have appeared in such journals as APR, The Georgia Review, Image, The Paris Review, and Poetry. www.nancynaomicarlson.com