With self-possession and discernment, Lise Goett has crafted a book of intellectual drive and irrefutable grace in poems that wrestle with humanity’s stewardship or annihilation of all that is wild and passionate at the core of existence.” — Roberto Tejada

“Lise Goett’s Leprosarium is luminous, symphonic, and suffused with mystical awareness—a primer on learning to live with despair and silence, to be tempered by suffering and also calm, inflamed by desire and yet arrive at acceptance of silence itself as God. In her intricately constructed asylum for incurables we come upon a host of artists and saints, lovers, a warden of extinguished hopes, / keeper of the stillnesses, avatar / of what is past. The allusive range is breath-taking, the diction precisely chiseled. It is as if we have taken the hand of a contemporary Virgil on a journey from the ancient world to our own stopping off to look at images mounted in a gallery of hard-won realizations. Certain lines will stay with me forever: The body is a prison with a key. When we enter Leprosarium we enter at once a work of brilliant lyric art and ecstatic vision.” —Carolyn Forché

“With her masterly soundscapes, multi-colored symphonies, and ekphrastic meditations, it’s clear Lise Goett is an impassioned chatelaine of sound (‘Eros Aprilling us into wider spaces’) and visual beauty, but most of all, she revels in the frissons, the firefly sparks that virtuosic language can liberate. With a saint’s or a dervish’s acuity, she insists, of this ‘spinning lazaretto’ of a world: ‘Everything is grist for ascendance.’ Indeed, in her cascading lines, rife with probity and complexity, soaring and suffering appear as close as Damon and Pythias. Drawn to defiance and disavowal as much as to ecstasy and devotion, Goett declares, in the brilliant, betrayed persona of Camille Claudel, the tragic sculptor: ‘I am wild like the nettle and dangerous / behind the gate.’ What a consistently astute, lush, and startling collection!” —Cyrus Cassells

“A clear-eyed diagnosis of our society and a profound care for the present are to be found enlivened in the poems of Leprosarium. With elegance of mind and music, now sinuous as woodwinds, now forceful as an unexpected chord progression, poetic lines here are able to suggest states of glory and splendor before vanishing again into the hard kernel of verbal custody—into ‘glister’ and ‘slurry’— into formal and acoustic fulfillment. Feminine eroticism under the aegis of patriarchy inform several meditations on the art of Leonardo, Fragonard, Rodin, Singer Sargent, Whistler, and Leonor Fini. With self-possession and discernment, Lise Goett has crafted a book of intellectual drive and irrefutable grace in poems that wrestle with humanity’s stewardship or annihilation of all that is wild and passionate at the core of existence. Leprosarium wonders whether we live in quarantine from the ghost-gods of desire—or for the ‘for-the-sake-of’s’ that are poetry’s promising argument.”  —Roberto Tejada

“The title of Lise Goett’s first book of poems (published in 2002) was Waiting for the Paraclete (wanting help, as from the Holy Spirit).  In her second book Leprosarium (asylum for lepers) she ‘explains’ on the book’s first page, quoting two lines from King Lear: ‘The art from our necessities is strange, / That can make vile things precious.’ In the final poem of this magnificent set of poems, Goett gives us the agonizing impossibility of a young nurse’s life in the sole American leprosarium, in the town of Carville, Louisiana: her last lines, the only ones from this various but amazingly sustained book that I need to quote, are these: ‘Come for the sycamores and oaks, the manacled light. // You’d have to be half crazy / or in love to do the work. Then learn to sit // with your despair and bear /the silence of God that is.’” — Richard Howard

“These bold poems by Lise Goett, so exquisitely wrought, find their subject in art, history, religion, and day-to-day life, focusing on the tense line between vulnerability and power.  Hers is a relentlessly questioning mind, willing to assume and to reflect complicated realities. This is dangerous art, as serious as a heart attack, unsparing mostly of the poet herself, and as intensely rewarding as it is unsettling.

“In ‘Symphony in White, No. 1: The White Girl,’ Ms. Goett takes another look at a painting by Whistler. The girl in the painting, young, virginal, is caught in a moment just before her life will tip entirely in another direction. The poet is reminded of Mary at the Annunciation.  She thinks of the moment of glory when the Virgin accepts.  But she also thinks of ‘a village calm before a devastation, / before the riders arrive with their polished mounts and handsome guns.’ The painting is ‘as transformative as the torrent of a blizzard /and as coldly alluring,’ and, like a blizzard, it has silenced any hint of the real struggle beneath.

“Ms. Goett’s poems aim to bring back, by the strength of dramatic narrative and ‘incarnadine,’ ‘sable-throated’ and ‘blood garneted’ images, the felt, the visceral knowledge. However, the clear intelligence and imagination of these poems make them as much homage to what they question as they are an act of resistance.” — Toi Derricotte, judge’s citation for the Robert H. Winner Memorial Award of the Poetry Society of America

“A chorus of variously injured and ill pilgrims seek solace and God, finding neither, in this intricate but uneven new collection from Goett, the follow-up to her 2002 debut Waiting for the Paraclete. In these pages life is ‘a fever in which we sweat/ the virus of indifference out,’ and the poems too wring out indifference through heightened diction and torqued syntax. The result is often wonderful, sometimes overly strained; individual poems stand out more than the collection as a whole. Goett continuously seeks to name despair in order to move toward a more intimate relationship with the self and the world. ‘Every era has its St. Prassede wringing her bloody sponge,’ Goett writes. ‘When did it become / our nature to help the tyrant to survive?’ The poems struggle to understand an ongoing history of multifaceted oppression through relentless regular stanzas and her frequent investigations into the canon of Western visual art. Goett knows how to make her readers squirm, and when she’s at her linguistically contorted best she offers complex understandings of the ways pain, disillusionment, and hope intersect.” —Publishers Weekly

When the manuscript that became Lise Goett’s new book Leprosarium was chosen for the Winner Memorial Award of the Poetry Society of America, judge Toi Derricotte’s citation said, “This is dangerous art, as serious as a heart attack, unsparing mostly of the poet herself, and as intensely rewarding as it is unsettling.” Goett’s poetry, infused with a bountiful vocabulary, is rife with extravagantly dramatic forms that take in the sweep of western art and religion via relationships between those with power and those who’ve suffered their commands. 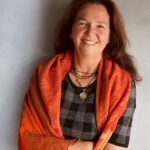 Lise Goett’s poetry has earned wide acclaim, including The Paris Review Discovery Award, the PEN Southwest Book Award in Poetry, the Robert H. Winner Memorial Award from the Poetry Society of America, and the Barnard New Women Poets Prize for her first collection, Waiting for the Paraclete (Beacon Press, 2002). She lives in Taos, New Mexico.

from “Molest the Dead”

There is no truth in news, no news in truth.
Skoal, my liege. If I am drunk, you are
the bar, the peaches of San Gersolè couth
and sweet. I down these hours, bare

of cartilage, patient some widening
of your breadth within me. Meddler, medlar,
I am that fruit that must rot to ripen,
rind browning on the branch until made

ready for your pluck, your coming. I stand
impeached. I love the flesh, its flush, its foison
under eager hands, the skin’s glissando—
and sex, how its truth lights up the dark, moistens

the arid desert in us, heaven
leavened or made hollow—by your leave.