Why is the Edge Always Windy?

“Mong-Lan’s poetry reminds me of Whitman, especially in “O New York” which addresses 9/11 and its immediate anti-Romantic after-effect, as well as her treatment of war’s aftermath in Viet Nam. She also reminds me of e. e. cummings; lines peppered across a wide page in eloquent visual prosody.” –North American Review

Mong-Lan’s poetry reminds me of Whitman, especially in “O New York” which addresses 9/11 and its immediate anti-Romantic after-effect, as well as her treatment of war’s aftermath in Viet Nam. She also reminds me of e. e. cummings; lines peppered across a wide page in eloquent visual prosody. Both M-L and e. e. are visual artists who treat their words as a palette of intimate hues painted on a paper canvas. In these poems, the styles of Walt, the good gray poet and e. e. are reused, recreated with a femmin(ist/ine) (land/mind)scape of emotion and sensibility that is all Mong-Lan’s own—bringing together Paris, San Francisco, Ha Noi, Switzerland, and New York in a much-needed global synthesis and symbiosis.

The International Examiner, Vol. 33, No. 8, has a featured review of Why Is The Edge Always Windy?

Mong-Lan, author of Why Is The Edge Always Windy? is profiled in the March 4, 2006 issue of The Japan Times.

Mong-Lan’s second book of poems, Why Is The Edge Always Windy?, is a book of revelations, nightmares, and love poems, cross-cultural and historically compelling. Imagistic, surreal and penetrating, her writing cuts to the quick. Whether writing of Vietnam or 9/11, Mong-Lan’s language is inventive and muscular, at times philosophical and elegiac. Grounded in the rhythms of the heart and the world, the poems are lyrically intense with an edgy intelligence.

…a stunning book that turns our ‘era of exile’ into one of lyric possession, the impulses to lament and to praise whirling together into a bittersweet music… these poems hold the complexity and contradiction of a global world view that spans from Hanoi to New York, from Chiapas to San Francisco, while still striking notes of intimacy and making formally beautiful sense.

Sponsored in part by the National Endowment for the Arts 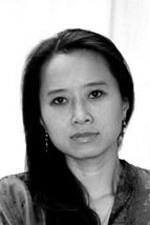 Born in Saigon, Vietnam, visual artist, poet and writer Mong-Lan immigrated to the US when she five. She received her MFA in poetry from the University of Arizona and has taught English as a second language, poetry writing, and English composition. She has held various other jobs, including washing tent tops for Cirque du Soleil. At Stanford University, she was a Wallace E. Stegner Fellow in poetry. During 2002-2003, she was awarded a Fulbright Grant to Vietnam.

In November 2007, the U.S. Embassy in Vietnam sponsored her in a series of lectures on Asian-American literature at Vietnamese universities in Saigon and farther south in the Mekong Delta. She met with Vietnamese faculty, students, and Vietnamese poets. At each university, she gave copies of Why is the Edge Always Windy? as well as donating one to the U.S. Consulate in Saigon, whose library is open to the Vietnamese public.