the lake has no saint

“Waite’s poetic gift lies in the choice of details for each poem—an ability to put a finger on a near-synesthetic instant of perception and let that little detail break your heart with hardly an overt expression of emotion.” –Lambda Literary

“Syntax — the arrangement of words in a sentence, the arrangement of rules in a system — is exactly how the mind linguistically organizes its self-expression. This is lake’s genius (and Ashbery’s, too, though he uses it to very different effect): to take innocuous syntactical phrasing and change the players mid-sentence — to get around English’s pronominal either/or by creating a syntactical both/and.” —Dana Levin, The Los Angeles Review of Books

“the lake has no saint pulls most of its strength from relationships, so when Waite’s language gets slippery, or wriggles out of perfect coherence, it is because relationships—even without the speaker’s autonomous piecing together of a gender identity—are slippery, wriggling, incoherent things.”—PJ Gallo, Coldfront Magazine

“Waite’s voice in this collection is characteristically unwavering in tone: driven, plaintive, daring. One might imagine this steadiness tiresome, but the opposite is true, given the poet’s Woolf-like switchbacking between outward description and the mind’s reflections.” —Erin M. Bertram, Rain Taxi

“Waite’s poetic gift lies in the choice of details for each poem—an ability to put a finger on a near-synesthetic instant of perception and let that little detail break your heart with hardly an overt expression of emotion.” —Jocelyn Heath, Lambda Literary

Stacey Waite’s the lake has no saint is a study in grief — a work of poetic archaeology that traces the artifacts of the past into the relationships of the present.

Embedded in a powerfully modulated sequence addressing a “you” who shifts in location and identity, many of these poems feel like forms of request, imploring. The speaker’s androgynous self-awareness — and wary attention to the gendered assumptions elicited by bodies — disclose in each poem a recognizable but disorienting (and pressurized) situation.

the lake has no saint will unsettle a reader’s sense of the certainty and stability of gender, as grammar and phrasing are also disrupted and blurred, often requiring us to read closely to hear where one sentence ends as another begins. Yet despite its formal and thematic iconoclasm, this is a book that clearly elucidates a story both heart-rending and ultimately — in its vatic honesty — triumphant. 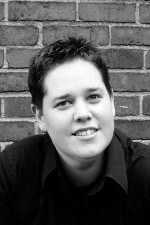 Stacey Waite is the author of three collections of poems: Choke (winner of the 2004 Frank O’Hara Prize), Love Poem to Androgyny (Main Street Rag, 2007), and the lake has no saint (winner of Tupelo’s 2008 Snowbound Chapbook Award). With both an M.F.A. in poetry and a Ph.D. in English from the University of Pittsburgh, Waite now teaches courses in writing, gender studies, and pedagogy as an Assistant Professor of English at the University of Nebraska—Lincoln.

when i do not want to say anything about the bridges or about the land of sweet water where my mother cannot bear the shadows of light fixtures, she cannot bear the suburban quiet. her neighbor sets raccoon traps beside the aspen tree, which has been cut back away from windows. there is little to say of the ocean which she cannot feel. i am not always sorry to return. sometimes i imagine myself to the courtyard of my high school. everyone is named “jodie” or “rachel.” the boys smoke around the flagpole with their milk cartons and long hair. this is a town with diners. no ravens, no steeples, no hard rains. you wouldn’t have liked it though you wouldn’t have known you didn’t. you cannot put your feet in the ocean without money. you cannot learn or breathe without money. you cannot learn or breathe with money—breathe without trains, without becoming a mistress back in the horse trails where the cut machines were sometimes kept. when you are young there is no way of telling

yet your father suspects something about your walk, about the notes you write to his secretary, lori. i love you you say take me to the beach again you say because you are in fourth grade, because your father is in love with his nurse and not your mother who cannot bear to ease the dialysis needles in. she cannot bear anger or the color of dusk. there is the waiting for someone else to die your father says the transplant wasn’t much he says the first thing he does with his kidneys is piss on the operating table he says laughing. and you are laughing too. you are thinking about the tree fort your father had torn down. you do not think his piss is funny. somewhere someone died you think to save him. when you imagine somewhere someone died, he is always a good man, someone who shouldn’t have you think, though you would never say—just about your walk: you did not fall in love with the secretary though once you took to smelling her hair and offering your air to the dry sand between her fingers.

when the chalk of androgyny