Winner of the Dorset Prize, selected by Robert Pinsky

“Power of language — stirred and replenished. Mario Chard writes spare, dynamic poems of muscular strength and deeply moving witness. ‘We think worry is a robe / we can outgrow.’ In this potent world of mixed landscapes and generations, his voice explores what we can and cannot know with elegant grace.” — Naomi Shihab Nye

I was given a chance to go to Ushuaia, Argentina, which is the farthest southern city in the world. I had family there. I went there, and I started wandering around, and here I discovered that I had stumbled upon an anchor, or the center, or the heart of the book—which might just be the title, but eventually would become a poem. –Mario Chard on Land of Fire

“Chard takes immigrant experience, recent history in Argentina, and a heady, but never unalloyed, religious sensibility and forges from those elements an immediate, striking poetry. What he seems to be aiming at is a kind of consolation. This is not consolation simply in an easy sense that in the Christian God, there is a place of rest and warmth, or that the sacramental can be present in the devastating discriminations meted out on the immigrant. But there is a sense that the cage can actually still amaze. That within our experience as fallen and falling, we need to maintain our gaze even when the world seems alien, even when we hold up our palms to shield that gaze from the sun.” — Ian Pople, The Manchester Review

“Chard’s tireless pursuit of the horse, and his mapping of all the lands and languages the horse leads us to, is the true and driving brilliance of his first collection of poetry, Land of Fire, published by Tupelo Press this March. This shrewd approach manages to capture the bleak contours of the American immigration landscape today, all the while blurring its edges. Chard is one of the most promising writers of migration today. His work is not simply an indictment of walls, but a careful tracing of their erection and the process by which we become encircled, and how we might yet find a way out.” — Levi Vonk, Longreads

“Chard’s debut collection of poetry takes its title from the English translation of Tierra del Fuego, the southernmost tip of his Argentine motherland. The son of an American father and an Argentine mother, Chard unearths his cultural and linguistic heritage, laces it with Christian mythos and reflections on fatherhood, and ignites the mixture into smoldering flames, like the hillside fires of the native Selk’nam and Yaghan peoples that Magellan spotted in 1520 and that inspired the mountainous terrain’s namesake. Chard’s poems burst with allusions to biblical scripture, with migrants and prophets playing equal roles, embedded in searing landscapes rich with the distinctively windswept branches of banner trees in Patagonia, ‘like severed arms, the hands still grasping.’ ‘Dystocia’ reconceives the virgin birth: ‘Sometimes a myth / delivers its prophet // breech.’ Chard’s verses reverberate with such soft notes and quick turns, like the pause before a stunning full stop. ‘The Oath’ catches the speaker’s newly naturalized mother when ‘the cords that first / learned Spanish in her throat / spoke first.’ A deliberate, deftly rendered, multivalent collection.” — Diego Báez, Booklist Online

“Chard displays deep interest in sonics and wordplay while dissecting language in this debut of irresistible tension. The collection is divided into two large sections, bookended by a single opening and closing poem. Within, Chard weaves together images of the biblical fall from grace, modern violence, and struggles to cross borders and speak the unfamiliar. ‘I watched her/ when she stood in line/ with others taking turns/ reciting words to make them/ citizens,’ he writes in ‘The Oath.’ Chard urges his readers to slow down and savor the process of untangling the occasionally slippery syntax of his narratives. In the devastating poem ‘Caballero,’ his linguistic threads suss out subtleties of meaning. For example, he writes, ‘Son,/ in Spanish you do not agree,/ you must be in agreement,/ estar de acuerdo.// Two people may agree or disagree,/ like we do,/ but they must also be in one/ or the other.’ In ‘Mistake,’ Chard recalls a tense moment translating for an upset father: ‘when he stopped/ speaking—my turn to translate his words—/ I was confused at first, simply/ started back in Spanish with what he asked./ The father laughed; the Board followed./ The room of parents broke/ into laughter.’ Throughout this fine collection, Chard takes moments of vulnerability and finds within them opportunities for connection.” — Publishers Weekly

“Land of Fire, with a kind of understated, shadow title — Tierra del Fuego — embraces the reality of collisions and meldings: Spanish and English, violence and peace, legend and fact, pain and creation, family comfort and the echoes of Abraham and Isaac. Mario Chard conveys that shifting reality in lines that sing, innovating choral patterns and refrains that honor the past by re-conceiving it.” — Robert Pinsky

“So far, the poems of Mario Chard’s Land of Fire make the best use of third person in any 21st century lyric. Chard wields restraint with a talent that is made all the more fierce by what it masks.  Each poem progresses in a mode of fairy tale or fable toward a sense of wisdom one could only gain through the deepest experience of regret.  Somehow that regret makes this a book of comfort, a book to love.”  — Jericho Brown

“An arresting start: ‘We make a thing we marvel / and learn to worry,’ the poet says. And then such lovely ruthless danger, dream, repetition, heart-stopping realization in this book. Mario Chard brilliantly taps Paradise Lost for its ‘night and chaos’ to translate doomed migrants at the border, ‘the disappeared’ in Argentina, the young watercolorist blinded by buckshot.  But also love and resilience, a sense of the sacred, of mistake and misgiving, a hike through canyons with brothers, a child’s picture book repaired so the little cardboard lever works again and the horse’s legs fly.”  — Marianne Boruch

“Power of language — stirred and replenished. Mario Chard writes spare, dynamic poems of muscular strength and deeply moving witness. ‘We think worry is a robe / we can outgrow.’ In this potent world of mixed landscapes and generations, his voice explores what we can and cannot know with elegant grace.” — Naomi Shihab Nye

Winner of the Dorset Prize, selected by Robert Pinsky

The poems in Mario Chard’s first collection follow three entangled strands — a contemporary immigrant story, echoes of the Fall in Paradise Lost, and meditations on fatherhood in the shadow of Abraham’s command to sacrifice a son. The poet speaks from the American hemisphere, immersed in histories of loss from long before Magellan first glimpsed his tierra del fuego. This Land of Fire is close at hand though we try and insist upon its distance, like the sun, like Milton’s Pandemonium, like the wars outside our borders or within. 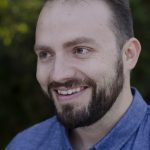 Mario Chard was born in northern Utah, the son of an Argentine immigrant mother and an American father. Recent poems have appeared in the The New Yorker, Boston Review, Beloit Poetry Journal, FIELD, and Image. Winner of the “Discovery” / Boston Review Poetry Prize and a former Wallace Stegner Fellow in Poetry at Stanford University, he currently teaches in Atlanta, Georgia, where he lives with his wife and sons.

We lived by the rich and thought we were rich.
Mornings we walked by rows of cypresses
and missed their shadows in our gait. We saw
men raise a hundred towers dressed like pines
that never grew. The way we knew a false
pine from the true was how it moved in wind.
At night we heard speakers in the false pines
hum, then cue, but no one spoke. We slept by
each other and thought we slept. In our dreams
the palms were leaning in the wind, straining
to hear. The cypresses confused our gaits.
But each time we woke, the towers shook more
like pines. Their needles grew. Soon all the palms
were signing wind. But no one braced for wind.