Marvels of the Invisible

“Such is this book’s formidable gift, the door of the body that swings into this world and back, and we find ourselves in two worlds, one barren, the other baptized in blood. Born and born again.  A phenomenal book.” — Bruce Bond

“In her first book, Marvels of the Invisible, Jenny Molberg looks through a scientific lens in poems that are both memoirs and detailed descriptions of life forces. Her verse is lush with imagery, and in both her lyric and narrative poetry shows imagination and mastery of craft. This book won the Berkshire Prize from Tupelo Press, and it’s clear on reading the poems why it was a winner.” — George Longenecker, Rain Taxi

“Like Tracy K. Smith, whose work at times seems a model, Molberg has internalized the language and attitudes of science. Smith’s father is an engineer; Molberg’s is a pathologist, who throughout the book serves as an emblem of dispassionate reason, observing and manipulating the world without obvious emotional involvement.” — Lee Rossi, Pedestal Magazine

“Molberg’s poems with female-identifying voices respond to male violence using precise details to upend such supine moments. It’s her ability to bring us into the microscopic that makes us feel each cascading idea. In a year where we all have seen so much of the ubiquity of female endurance, Molberg’s shared speakers invent and present the new prosody of a #MeToo movement.” — Matthew Minicucci, The Rumpus

“If ex-poet-laureate Billy Collins is correct in saying that poetry is ‘everyday moments caught in time,’ then Jenny Molberg’s debut collection The Marvels of the Invisible,winner of 2014 Berkshire Prize, is exemplar. As if flipping through a family album, Molberg covers a personal history from birth to death, hospital and bible, family and landscape, hope and redemption.” — DM O’Connor, NewPages

“. . . arisen out of an actual life, celebrating and struggling with the issues and events of that life, and making of them a beautiful, fraught sense. These poems bring together vastly different ways of seeing the world . . . through a synthesizing and transformative imagination attuned to the details of the physical world while seeking realms beyond the visible . . .” — Jeffrey Harrison, final judge for the Berkshire Prize

“[Molberg] is a poet of intimacies, of the body, the family, the natural world, and emblematic of her difficult yet clarifying vision of those intimacies is the remarkable poem, ‘Superficial Heart,’ about a child born with its heart external to its body. The human heart exposed: the ultimate intimacy, marvelous and terrible, and in Molberg’s surgically precise hands, unforgettable.” — B. H. Fairchild

“With the vigilance of the microscope, Jenny Molberg’s stunning debut volume, Marvels of the Invisible, takes us out by going in, deep into the sacramental vessel where the once invisible—the ravaged womb, the father’s grief, the mother’s cancer—comes, by beauty and horror in equal measure, into focus.  Somewhere a pianist plays a nocturne for the animals, and the music raises the elephant from his instrument, anoints the ashen hide, and, like the cry of its occasion, ripples the water in its wake.  ‘The endangered syntax descends.’  Such is this book’s formidable gift, the door of the body that swings into this world and back, and we find ourselves in two worlds, one barren, the other baptized in blood. Born and born again.  A phenomenal book.” — Bruce Bond

“Molberg takes the unlikely, unseeable, and impossible and gives them narratives of their own in this lyrically imaginative debut. The world of the book is hopeful even when it is precarious; in ‘Superficial Heart,’ Molberg ponders the life of a child born with a heart outside of her body, had she survived. Even in the book’s moments of grief, Molberg always offers renewal: ‘when a whale dies, it lives a second time./ It must drop to great depths, then an ecosystem/ is born of its body.’ Water, ever-malleable, is a driving metaphor, and the metamorphosis of a liquefying caterpillar that ‘builds a shell around itself/ dissolves, becomes another thing’ operates as an act of faith and trust. The title poem is named for the instruction manual of a microscope that the narrator’s father received as a child, and which in turn fueled a life’s work. Molberg engages in ekphrastic dialogue with works of art and science, but her strongest poems address intimacies. A matryoshka doll becomes a metaphor for small personal secrets, while an oyster occasions a meditation on grief: ‘If you look closely,/ there is a ring, mother-of-pearl, around the hole./ It’s the place closest to pain that shines.’ Molberg explores absence to conceive of new possibilities.” — Publishers Weekly

“Molberg’s startling collection mixes memory with biology while citing the Torah, the Brothers Grimm and archival letters from 18th century scientists. She likes to get right up close to the body, delve into its interior for meaning. In her lucid, clear-voiced poems, acts of seeing become acts of self-definition. Dreaming of her doctor father as a boy, she sees him viewing an ant under his toy microscope, the insect ‘almost sickening in its translucence.’ The body laid bare is intimate and excruciating, like her mother’s cancer decades later.” — Diana Whitney, The San Francisco Chronicle

“Jenny Molberg’s debut poetry collection Marvels of the Invisible grapples with generational hardships, medical afflictions, faith, and relationships to others. Winner of Tupelo Press’s well-regarded Berkshire Prize, this collection explores the speaker’s relationship to a daughter and her parents. Marvels of the Invisible is a hard-eyed look at what ails these other characters, and how the world around them is affected.” — Tyler Roberts Sheldon, The Los Angeles Review

In this award-winning debut collection, the smallest things of the world bear enormous emotive weight. For Jenny Molberg, the invisible and barely visible are forms of memory, articulations of our place in the cosmos. Parsing the intersections between science and personal history, and contemplating archival letters from 17th- and 18th-century scientists along with new studies in biological phenomena, Molberg’s poems examine complexities of relationships with parents and the faultiness of certainty about earthly permanence. In the title poem, a child begins by looking at an ant through a microscope, and later, as a husband and father, with the same discerning eye he recognizes the cancer in his wife’s breast. Marvels of the Invisible sounds the depths of both grief and amazement, two kinds of awareness inseparably entwined. 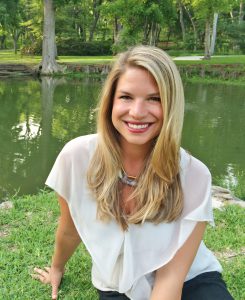 Jenny Molberg, originally from Texas, earned her BA at Louisiana State University, her MFA at American University, and her PhD at the University of North Texas. Her poems have appeared or are forthcoming in Ploughshares, The Missouri Review, Best New Poets, Poetry International, North American Review, Copper Nickel, and other publications. She teaches at the University of Central Missouri and is Co-editor for Pleiades.

I think of you, my lost girl, when the wing
of a tailfin rises beside the boat, dripping
in salted robes. This movement, like song,
pulls me under, where murk reveals
the obscurities of loss. The language
is epic, invisible, submarine. A child
hears her home in clefs of water, in whale song:
unfathomable, plosive, drummed, the loudest blues
on earth. A thousand feet down, more join in the refrain.
Another endangered syntax descends. 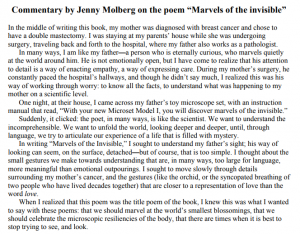