Mistaking Each Other for Ghosts

“Raab brings a darker timbre to poetry’s comfortable middle register; his eminently approachable, low-key lines are never quite as affable as they seem, and the book is all the better for that.”— David Orr, The New York Times Sunday Book Review, “The Best Poetry Books of 2015”

“Raab brings a darker timbre to poetry’s comfortable middle register; his eminently approachable, low-key lines are never quite as affable as they seem, and the book is all the better for that.”— David Orr, The New York Times Sunday Book Review, “The Best Poetry Books of 2015”

“In his eighth full-length collection, Raab (The History of Forgetting), a teacher of literature and writing at Williams College, exhibits tight lyricism and a characteristically American wit in meditations on mortality and intimacy. ‘All that I am keeps me silent,’ he opens the book’s meditative opener, before moving in the next poem to thoughts of murdering a coworker: ‘Let’s say you feel someone is better off/ dead, but you don’t do anything about it.’ Such wild swings in tone and subject matter are common throughout, as are Raab’s occasional, but piercing, socio-political insights (‘sometimes the rich appear// to ask for my trust. Believe us, they whisper./ What you can’t have you don’t need./ What you were never given you can never lose’), his scientific revelations (‘Maybe nothing’s only itself when we’re looking’), and aphorisms (‘Too much thinking is worse// than too much action, except for Proust./ And many other equally persuasive exceptions’). What binds this collection is neither the formal qualities of the poems, nor Raab’s unmistakable voice, but his ability to move across registers with consistency and well-tempered feeling: ‘Swallows dash through the twilight/ and I don’t think about/ what they might mean,’ he writes, ‘Or I didn’t// just then. They swooped in and were gone.”— Publishers Weekly

“Raab, a regularly anthologized poet with more than half a dozen collections of poetry, including What We Don’t Know about Each Other(1993), a finalist for the National Book Award, continues to present his colloquial brand of prose poems with precise lyrical conversation in his latest book. These poems offer powerful evocations of the most human of themes: loneliness, the haunting resolution of doubt, love’s many shades, and a deeply intelligent form of comfort amid the messiness of emotions. Always, reason balances high sentiment and dramatic outbursts. Raab’s is a wholly American voice that reveals itself in sardonic humor and reflection as the poet addresses universal, philosophical quandaries; heaven and hell; and everything in between: ‘Is there anything you want to know ? / my father once asked me. / I can’t picture the scene. Were we out on the lawn? / Was a baseball involved? No, I said, / taken by surprise. And he turned away, / embarrassed and relieved.’ A wonderful, mature, sweeping collection”— Mark Eleveld, Booklist

“The poems in this collection are a beautiful demonstration of Raab’s masterful ability to reach his unseen hand, his ghostpoetry hand and stroke,   or even grab us, whichever he needs to do at any given moment. He blends the past, present , and future into one, and makes us realize how dependent they all are upon one another.  This is a wonderful combination of philosophy, insight, poetic language and technique that will satisfy not only in autumn but any season, any year, anytime.” — Francine Witt, South Florida Poetry Journal

“Pretend that these poems by Lawrence Raab have come to you from very far away. Think of them as written by Poet Z, a heretofore-unheard-of Eastern European poet, a Kafka-Andrade-Calvino character from Serbo-Chechnya-Lithuania.

What’s in his poems? Angels and human monsters, decades and generations, universities turned into ashes, the consolation of philosophy, despair in the middle of the night, a tutorial in lucid dreaming.

Only his poetic humor gives away his American citizenship. His poems lead you into, then trap you, in strange worlds, boxes constructed of story, logic, and aphorism, which then are revealed to be exactly like life itself.

Now, these poems by Z have finally been translated into an American idiom that is canny, sly, defeated, pessimistic, resilient, and perplexingly knowledgeable about the human predicament. They are also often beautiful, bewildered, disquieting, and full of paradoxical laughter and contemplative solace. Mistaking Each Other for Ghosts is a tender, lonely, deeply intelligent tour of that distinctive country of the soul.”
— Tony Hoagland, author of Twenty Poems That Could Save America

“I don’t know anything like Lawrence Raab’s poems. I can’t get this voice from anywhere else, and that is very rare. ‘A Cup of Water Turns into a Rose,’ the long poem that concludes Mistaking Each Other for Ghosts, is spellbinding—intricate and resonant in its weave, and very strange in its clarity and the odd lucid story it seems to be telling and untelling.”
— Adam Phillips, author of Missing Out: In Praise of the Unlived Life

Tupelo Press is pleased to provide the Mistaking Each Other for Ghosts Teacher’s Companion in free, downloadable PDF format. 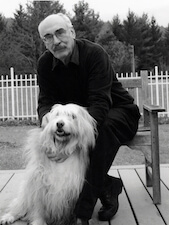 Lawrence Raab is the author of seven previous collections of poems, including What We Don’t Know About Each Other, which was a finalist for the 1993 National Book Award. He has received grants from the National Endowment for the Arts, the Massachusetts Council on the Arts, and the Guggenheim Foundation, as well as numerous residences at Yaddo and MacDowell. He teaches literature and writing at Williams College.

from “A Cup of Water Turns Into a Rose”

Nothing more to see: night
pressed against the windows.
But on the porch my mother can hear
birds in the woods still singing.
So it isn’t night completely.

Let the children stay out a little longer,
she thinks, listening to them
as they leap from their hiding places
and run off before they’ve been touched.

On such an evening she must have played
this game herself. What was it called?
Or perhaps it never had a name.