“…it’s as if Emily Dickinson’s compression and intelligence were stretched out over a longer, sinuous line that wraps around itself and searches out significance in observations rendered so intense they transform into vision.” —Gregory Orr

Roanoke College professor (and my good and dear friend) Melanie Almeder has finally blessed all of us with some of that magic poetry of hers that has, before now, gone unpublished in book form. Mel is one of the better natural storytellers around, but her poetry is simply exquisite, even for the bumpkins (like me) among us who prefer prose under normal circumstances.

On Dream Street (Tupelo Press, $19.95) is a compelling, often riveting look at some of the things that interest this perceptive, sometimes funny, always fascinating woman: Florida and Maine, World War I poets, time, lust, buzzards and ducks, noise in the night. With many of the words in this too-slim volume, Mel has accumulated poetry prizes and it’s easy to see why, now that we can. She’s a special talent in a demanding genre.

On Dream Street may be Melanie Almeder’s first collection of poetry, but what other contemporary poet have we seen held favorably to Emily Dickinson, as Gregory Orr has done?  In Almeder’s poems, Orr sees Dickinson’s “compression and intelligence” as if “stretched out over a longer, sinuous line that wraps around itself and searches out significance in observations rendered so intense they transform into vision.”

“Melanie Almeder is in love with things and the names of things: ‘A bag caught in a bare tree./Wires. Stand of evergreen. Snow,’ as well as ‘Sweet Gum, Saw Palmetto, Sumac, White Ash.’ In these poems, dreams are not cloudy wisps of casual reverie, but the specific and vivid landscapes of our real night times, by turns exhilarating and dispiriting. Almeder’s is an almost pantheist world, stuffed to overflowing (‘I loved an entire city as full up as a jar’), a world in which rivers, mountains, and trains are all alive, willful and always wanting more. She gathers ‘all the junk from all/the junkyards in town’ and names it Eden; these poems make the name stick.”—Reginald Shepherd

“Again and again, Melanie Almeder’s lines show themselves urgently alert to the world with a rhythm all their own, one in which “the Atlantic mutters up a waste of dead skeletons” or the poet can announce: “I was a catch in the throat of loneliness./Now, the creak in the trees// when the wind leaks through them. /Now the sweet field in a riot of seed.” (“On Dream Street”).  In these magnificent poems, it’s as if Emily Dickinson’s compression and intelligence were stretched out over a longer, sinuous line that wraps around itself and searches out significance in observations rendered so intense they transform into vision.” —Gregory Orr

“Like an acrobat fearlessly singing an aria, Melanie Almeder makes a rare debut with her first collection of poems, On Dream Street.  Here she croons her irrepressible music, luring the lyric poem back to its sources in canticle and nocturne. Almeder strikes a balance of exquisite contradictions, making her lines at once sinewy, but sharp, whimsical, but elegiac. Brava for this poet’s luscious voice—she seems to seize every word in the ecstasy of its bloom.”—Molly Peacock

“Magnificently loopy and loving, ‘Poem for the Man Who Does Not Answer the Phone’ was my introduction to Melanie Almeder’s work. She has included it here, in her début collection that brings to the glad attention of us all her distinctive, ironic voice, noticing eye, poetic leaps, and fantastic freeform narratives. Talking to the man who doesn’t pick up, she could be telling us all to ‘get out of bed // and see the reasons to love.’ Her book is a wake-up call for every one of us.”—Kelly Cherry 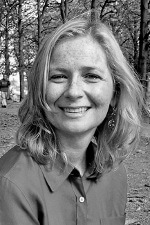 Poem for the Man Who Does Not Answer the Phone

It is a good thing I am not on some land spit
rattle snake bit, praying the rings will rouse you,
who refuse to answer the phone.  A woman could lose a foot that way,

or an entire precious ankle bone could go to rattlesnake rot.
Alone on that swamp spit, on that lick of land
the sun scorched to bits,

a woman could lose the whole leg waiting.
It is a good thing Orange Lake, that ancient most
sink hole is not on fire and I am calling to say,

one lake breaks into flame and the moon itself goes red,
the fossils of ferns unfurl from their limestone graves
and burn. Darling, I’d say, get out of that bed

and see the reasons to love: the Cedar knees,
the silvered oak trees, the paths an apple snail traces, sweet ugly possums,
Spanish Moss that needs nothing but the brine of July air.

It’s a good thing you are not answering the phone
and I am calling to tell you I’m bit,
the lake burned

the chickens flew the coop, the cows broke out,
the rooster went pacifist.  Get out of bed, I’d say, and hear the entire herd
hoofing away, how the barn lists with their loss.