“The achievement of ‘Poverty Creek Journal’ is precisely that it does retrace that kind of wandering—and, in so doing, makes something lovely and meaningful of a difficult year. Gardner does not go in for pat analogies; he does not claim, as Camus once did about soccer, that running taught him everything about death. Nor does he go in for pat consolation. His journal does not so much end as stop, as if he has simply not yet risen for the next morning’s run.” — Kathryn Schulz, New Yorker

Listen to a reading from Poverty Creek Journal by Thomas Gardner here.

“The achievement of ‘Poverty Creek Journal’ is precisely that it does retrace that kind of wandering—and, in so doing, makes something lovely and meaningful of a difficult year. Gardner does not go in for pat analogies; he does not claim, as Camus once did about soccer, that running taught him everything about death. Nor does he go in for pat consolation. His journal does not so much end as stop, as if he has simply not yet risen for the next morning’s run.”

“This is one of the most beautifully rendered pieces about running I’ve encountered under fifty pages. On the surface, Poverty Creek Journal is a daily running log in lyric prose, but it soon offers a meditation on the articulable nature of the human experience. After the narrator suddenly loses his brother, we follow his thoughts through nature, his mind wandering to integrate the strength and frailty of the body as he runs. Gardner’s luminous insights on running are often breathtaking. He likens running to ‘half sleep, when you’re awake in a way, but aware of dreams passing in a kind of un-retraceable wandering….the turning colors passing through me… no real way to put any of this into numbers, mile after mile streaming through me.’ We escape with Gardner away, from the finitude of miles and the illusion of stasis through his will to observe and gradually integrate loss into his body.”

“[E]ach year I turned my attention again to Poverty Creek Journal, listening closely to Gardner’s prose to understand better what I was striving for in my own work. Only recently did I start to realize that what he’d achieved in his writing didn’t mean I was an inadequate writer, but rather that I’d found a partner of sorts, someone whose work I could converse with through my own work.”

“Sadness, both large and small, seems to follow the author like the looming shadow of another runner just off his shoulder. We learn that he was running the Boston Marathon in 2007 when a Virginia Tech undergraduate shot and killed 32 students and faculty and wounded 17 more. When he returns to campus, he struggles with the disorientation of having been absent from his community at the time of the tragedy. Back in his office he says: ‘When I got up from my chair, the shock of my body still battered by the marathon surprised me. I’d forgotten Boston entirely.'”

“There is the body. There is loss. There is the understanding of human frailty, the magnitude of memory, the concession of grief. Thomas Gardner is a runner. He was a runner at Bucknell and is running still as an English professor at Virginia Tech. For him, running is both metaphor and antidote. Poverty Creek Journal captures the shock of our mortality. Gardner’s brother John died at 58 from a heart attack in his sleep during a skiing trip to Utah. The older brother remembers and calls in the wisdom of great poets before him, for his family and for the collective memory of humanity”

“The journal’s realm is the book’s title: Poverty Creek is an actual place in Virginia where Tom runs (he’s been a runner for years, and not the going-for-a-jog sort but the does-the-Boston-marathon-with-regularity sort), and the pieces come to make up something akin to a wildly thickened, deepened, and complicated runner’s journal, considerations of poetry and spirit standing in for split times or pace. That said, you do not need to know one thing about poetry or running to savor the sustenance on offer: an awareness of bodies and their abilities and pains, and an awareness of words and their attempts and failures at capturing experience, seem all that is required.”

“What makes this journal much larger than its length, more panoramic than its scope, is the multitude of companions joining Gardner on his daily runs. At times ‘the woods murmur and cluck … a single guttural syllable.’ At other times Gardner encounters Whitman, Dickinson, Stevens, Bishop or Heaney and briefly stumbles over a line or two or three of his poetic accomplices. Still more poignant are the moments he shares with his wife, Laura, and his brother John whom he lost to a heart attack.”

“Enthusiasts who enjoy their workouts mixed with erudition—and those who have never jogged a step but like a well-placed Emily Dickinson quote—should check out Thomas Gardner’s Poverty Creek Journal. Recommended by a New Yorker writer last year as a means to explain to nonrunners what people think about while running, this slim diary does indeed capture the sometimes labored, sometimes blissful flow of thoughts that occur. Gardner’s own narrative is often as beautiful as that of the writers he cites, and he is as eloquent in his depiction of nature and emotions as he is in his feelings about ­running.”

”What a brilliant book! A Door Ajar cuts across genres and eras…. This book offers a chance to spend time with some of the keenest literary intelligence we have. It’s a feast.” —Robert Hass

Thomas Gardner was born in Indiana, raised in New Jersey and Western Maryland, and now lives and teaches in Blacksburg, Virginia, on the edge of the Jefferson National Forest. He attended Bucknell University, where he ran cross country and track, then earned graduate degrees from Syracuse and Wisconsin. His most recent books are A Door Ajar: Contemporary Writers and Emily Dickinson (Oxford, 2006) and John in the Company of Poets: The Gospel in Literary Imagination (Baylor, 2011). His playEurydice was performed at the Edinburgh Fringe Festival in 2006. He has been a professor of English at Virginia Tech since 1982, and he still regularly competes as a runner.

“That rush in between when it all comes undone. Knowing its edge like your own pulse and breathing. As I knew them this morning, racing a 10K in late-spring heat, the taste of panic in the last two miles as everything slipped away, losing time and barely finishing. A tingling in my limbs as if I were driving on ice, the road beneath me suddenly gone, the feeling of that in my hands. Deeper than words, being lost for a moment and then being done. Left with a pounding, stiff-legged stagger.”

“The sun gradually reaches the hollow, throwing shafts of light and bars of shadow across the trail, and I’m suddenly back in my body, back in time, the light flickering through the trees like flashing fields from a boxcar. I can almost hear the rails beneath me, and for just a minute I have a sense of how fast everything is moving. I’ve only felt this way once or twice before…” 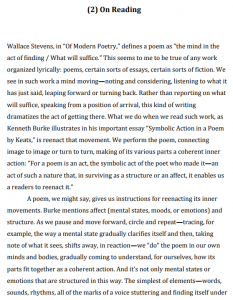