The Beginning of the Fields

Angela Shaw’s new book is likely to be greeted as one of the most powerful debuts of this decade. Both muscular and delicate, these poems plunge a reader back into the sensory world, shaken and exhilarated.

It’s thrilling to discover a writer whose mysteries fibrillate with an oddly gorgeous accuracy, whose beautifully made work offers jolts of recognition along with sublime surprises. Such ravishing poems imbue the ineffable—time, mortality, transience—with pathos and urgency. The Beginning of the Fields introduces a poet in full command of her impressive powers.

Billy Collins has called Shaw’s new book “a brilliant reminder of what distinguishes poetry from prose. Whether her focus is landscape, clothes, or the rituals of passion, her language is fresh, tense, alert, and keenly aware of the sonic and rhythmic pleasures it provides. Reader, dig in.” 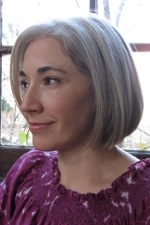 Born in New Jersey and raised in West Virginia, Angela Shaw earned a B.A. in English Literature from Swarthmore College and an M.F.A. from Cornell University. She presently lives in Swarthmore, Pennsylvania, with her husband and their two children.

Your diffident bewilders, sly miss of fire
hall dance. I spy you, mason, mending the place
between the wall and yourself, mum as a brick.
You are fastened, affixed, all mystery trapped
in your thin-lipped simper. Shy dear, what fear seals
you shut to the world’s grit., its bad seed? You’re no
rare beauty, and I am not what the mothers
have warned you against— some young bungler who pries
his way in, pilfers the gem, missing the rest.

Children in a Field

They don’t wade in so much as they are taken.
Deep in the day, in the deep of the field,
every current in the grasses whispers hurry
hurry, every yellow spreads its perfume
like a rumor, impelling them further on.
It is the way of girls. It is the sway of their
dresses in the summer trance
light, their bare calves already far gone
in green. What songs will they follow?
Whatever the wood warbles, whatever storm
or harm the border promises, whatever
calm. Let them go. Let them go traceless
through the high grass and into the willow-
blur, traceless across the lean blue glint
of the river, to the long dark bodies
of the conifers, and over the welcoming
threshold of nightfall.