A handwritten court record offers a forgotten name, a baby cries in the archive: In Wintering, her second collection of poems, Megan Snyder-Camp composes a disruptive, archive-sourced poetry of witness that challenges the given story of the “Indian vocabularies,” indigenous language records Lewis and Clark gathered during their 1804-6 journey. Exploring whiteness, memory and language, Wintering is a book about the mark our hunger makes.

“Wintering is an elegant attempt to restore humanity to a moment in history stripped of it by racism and colonialism. It’s unlike any book of poems or historical document I’ve read: formally eclectic, incorporating erasure pieces in addition to haibun, and concluding with what is essentially a brief academic paper, entitled “No General Use Can Ever Be Made of the Wrecks of My Loss.” The poems in Wintering could be enjoyed out of context for their beauty and they do have individual through-lines—moments with her children, crystalline observations of the natural world. The prose provides the reader an invaluable contextual handrail.” — Sarah Galvin, CityArts

“Snyder-Camp weaves genres and concepts in an intriguing and open-ended examination of national and personal American mythology. In her lyrical analysis of the Lewis and Clark expedition, she maintains a perceptive lens — ‘without its story, the images are gorgeous’ — and proceeds to make space for both the lush beauties and the stark atrocities of history.”
— Laura Da’

“Wintering is a ceremonial feast of a book, its offerings rich in language that is both lyrical and scholarly.… Snyder-Camp restores the washed-out textbook myth of the explorers’ arrival at the Pacific to its vibrancy, a human story as sorrowful, terrifying, foolish, exhausting, culpable, and occasionally funny as all our lives are, if truly told.” — Melinda Mueller

“listen; listen; abysmal water.” — with found text from the journals of Merriwether Lewis and George Clark, observations from her own travels overlain upon their journeys at the mouth of the Columbia River, and acute awareness of what was overwritten and wrongly seen in their historic voyage, Megan Snyder Camp braids a remarkable investigation in Wintering. She is able to be both generous and hard-eyed, both yearning and unflinching. From Oregon to Monticello, from PlayLand crawled by kids to microfilm-speeding librarians, Snyder-Camp backwards-traces what has been left to us as simplified legend and restores its necessary complexity with lyric power. “I live in Seattle now… Back east is where I am from,” she writes with a sorrowful sense of the burden that very knowledge gives her to carry. A corrective as much as an investigation, a hunt for language difficult to find and languages lost, Snyder Camp’s book joins the poetic investigations of Frank X Walker’s Buffalo Dance: The Journal of York, Campbell McGrath’s Shannon, and others. I cannot wait to share this intelligent, emotionally wise, innovative collection.” — Elizabeth Bradfield

“Strongly rooted in the history surrounding the expedition, Wintering excerpts the journals of Meriwether Lewis, extant newspapers, and other historical documents. Poems and sections shade back and forth between past and present, Snyder-Camp’s attempt to recreate Lewis and Clark’s experience and their own recounting of the journey taken. While the lack of references to York (Clark’s slave who served the expedition and arguably enabled its success) felt like something of a missed opportunity, the reader is still given a wealth of details which bring the history alive.” — Tessera Dudley, Mom Egg Review

A handwritten court record offers a forgotten name, a baby cries in the archive: In Wintering, her second collection of poems, Megan Snyder-Camp composes a disruptive, archive-sourced poetry of witness that challenges the given story of the “Indian vocabularies,” indigenous language records Lewis and Clark gathered during their 1804-6 journey. Exploring whiteness, memory and language, Wintering is a book about the mark our hunger makes.

Megan Snyder-Camp grew up in Baltimore and received a B.A. in Creative Writing from Oberlin College and an M.F.A. in Poetry from the University of Washington. She has been awarded scholarships and residencies from the Bread Loaf Writers’ Conference, the Espy Foundation, Djerassi Resident Artist Program, and the Helen Riaboff Whiteley Center. She has taught at the University of Washington and the Richard Hugo House in Seattle, where she lives with her family.

Last night, reading, I heard the geologist tapping on my window. For your poem, he said. Outside, the moon near full. As my eyes adjusted I saw a faint white circle etched in the sky, so wide the cedars nearly hid it. A hoop for the moon, a saucer. Spill of its yellow milk. Or say it happened

this way instead, without the geologist: I was bringing toilet paper from the car when the night sky lightened. Arms of white, I saw where the moon, like a leashed dog, had paced its dark yard bare. 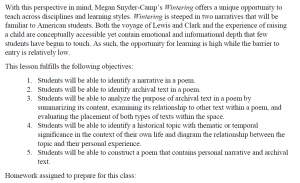